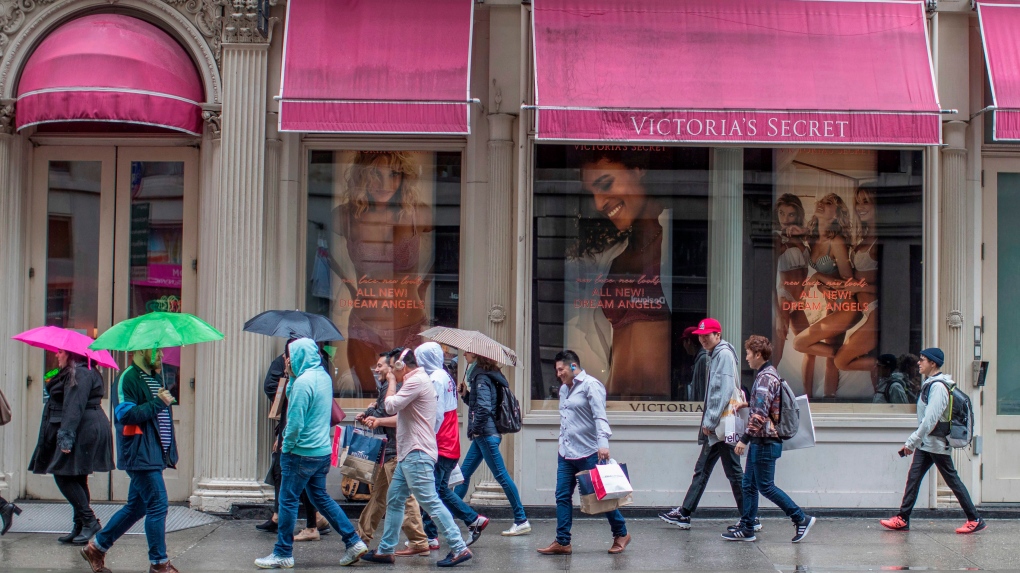 In this April 4, 2018, file photo, shoppers walk past the Victoria's Secret store on Broadway in the Soho neighborhood of New York. (AP Photo/Mary Altaffer, File)

Dozens of Victoria’s Secret stores, including some in Canada, are being earmarked for closure as owner L Brands looks to shore up poor financial performance at the lingerie chain.

The announcement came amid the release of L Brands’ fourth-quarter results, which showed that adjusted operating income at Victoria’s Secret’s North American operations fell by 35 per cent in the quarter and was down by 45 per cent for the 2018 fiscal year as expenses rose while sales remained flat.

“We are closing more stores … based on the overall performance of the Victoria’s Secret business not meeting our expectations,” L Brands chief financial officer Stuart Burgdoerfer told analysts Thursday, adding that the company typically averages about 15 store closures per year.

Closure activity doubled that rate in 2018, with the company shuttering 29 Victoria’s Secret stores in the U.S. and one Canadian location of its Pink brand, which targets teenagers and young women.

Even more closures are planned for this year, with L Brands saying that 53 of their North American stores are expected to shut their doors this year. That number includes 50 Victoria’s Secret locations in the U.S. and three in Canada.

The company has not publicly identified which specific stores will be closed. Burgdoerfer said closure decisions are made based on factors including current and projected performance, cash flow and local market factors.

In addition to the increase in closures, L Brands says it has “substantially pulled back on capital investment” at Victoria’s Secret stores.

“We have not met our own expectations for overall performance, and we are intently focused on improving results,” Burgdoerfer said.

La Senza, which had been owned by L Brands until it was sold to private equity firm Regent last month, closed one Canadian store over the past year to leave it with 118 locations in the country.

Declines in L Brands’ intimate apparel business were partially offset by a 12 per cent sales increase at Bath & Body Works, which represents the largest portion of the company’s portfolio. Burgdoerfer credited the strong performance in part to White Barn candles into some new and existing stores.

The company closed one Bath & Body Works in Canada in 2018 while opening another, and expects to open one more in Canada this year. This would leave the chain with a total of 103 stores in the country.

L Brands’ overall results for its fourth quarter, which includes the Christmas holiday period, were virtually flat as compared to one year earlier. Net sales were up by one per cent, at $4.85 billion, and net income decreased by one per cent to $595 million.

The results beat the company’s own forecasts for the quarter, which it had revised downward midway through 2018.

Burgdoerfer said the company expects the store closures and other factors, including recent leadership changes and an upcoming website relaunch, to improve the performance of the company’s lingerie brands in the coming year. He said Victoria’s Secret will place a “dominant focus on the customer and on the merchandise” as it attempts to turn around its business.

“The most important thing, in our view, is the merchandise,” he said.

“If the merchandise is special, unique, reflects fashion, has newness … there are terrific opportunities.”