Via Rail to comply with CTA ruling, says it will allow two mobility aids on trains 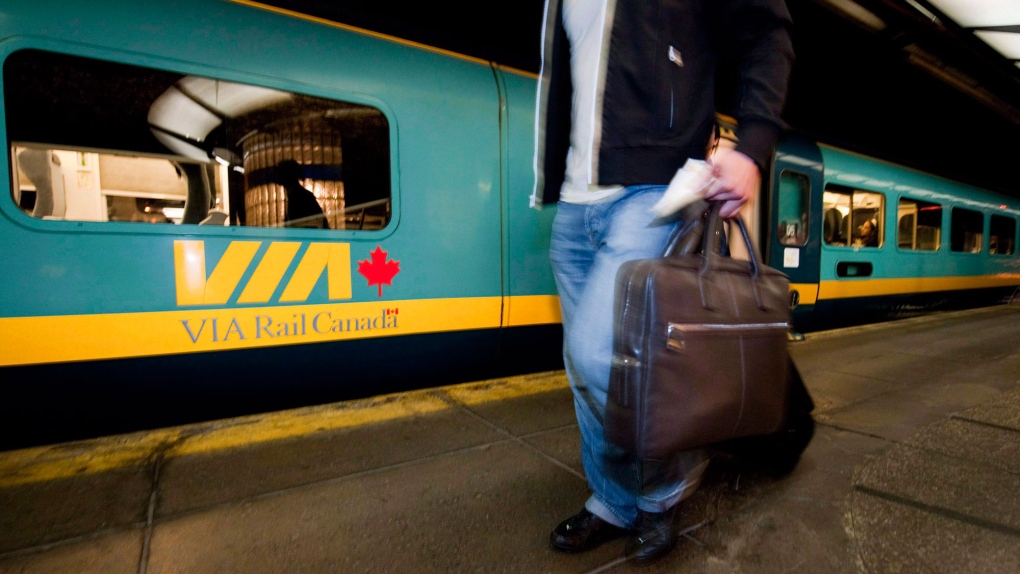 Passengers board a train to Toronto in Montreal, on July 26, 2009. (Peter McCabe / THE CANADIAN PRESS)

TORONTO -- Via Rail says it will no longer resist an order from the Canadian Transportation Agency and will double its capacity to accommodate wheelchairs on all its trains across the country.

The national rail provider had been embroiled in a lengthy fight with the agency, which ruled that the company needed to make its trains more accessible for physically disabled passengers travelling with mobility aids.

Via's previous policy only allowed for one such aid to come aboard the train, forcing any other devices to be dismantled and kept in the baggage car.

A married couple who contended the policy made it nearly impossible to travel together filed a complaint that prompted the CTA ruling.

Via challenged the February order for months, but announced Wednesday that it would now comply.

The company says all trains coast to coast will be able to accommodate two mobility aids effective Jan. 3.

"Via Rail is committed to providing sustainable, reliable and accessible intercity travel for all Canadians," company president Yves Desjardins-Siciliano said in a statement. "Thanks to our revised policy, more people with mobility restrictions will be able to travel together."

For the couple at the heart of the CTA complaint, the news was a most welcome surprise.

Marie Murphy, who filed the complaint with her husband Martin Anderson, nearly burst into tears upon hearing of Via's decision.

"I'm ecstatic," she said in a telephone interview. "This is years in the making or longer."

The complaint from Murphy and Anderson, both of whom have cerebral palsy and travel with motorized scooters, contended that Via's previous policy was discriminatory to people who rely on mobility aids.

They argued existing policies were inadequate, saying their expensive mobility aids had been damaged after being dismantled and stored in the luggage hold.

Via defended their approach, saying any difficulties the couple encountered were the result of individual customer service failings rather than flawed policy.

The CTA sided with Anderson and Murphy in February, ordering Via to either provide two tie-down areas per train or allow two mobility aids to make use of the same tie-down by May 15. Alternatively, Via could offer evidence that it could not comply without undue hardship.

Via opted to change its policy, saying it would make it possible for two mobility aids to use the existing tie-down area on specific trains as long as the users had the capacity to transfer to a regular seat for the trip.

On June 23, the CTA sent Via a letter seeking "confirmation" of several points, including the fact that the new accessibility rules would be applied on every Via train across the country.

Via's July 12 response, filed after a deadline set by the CTA, made it clear that it planned only to apply the rules on one of three train types travelling within the Quebec-Windsor corridor.

The rail provider argued that Murphy and Anderson only travelled on that specific route and contended establishing more than one tie-down on the other two train types was either in the works or not feasible.

Last month, the CTA flatly rejected Via's counter-arguments and ordered it either to claim undue hardship or make their trains more accessible across the board.

"This ... is inconsistent with the Agency's order," the CTA wrote. "While Via refers to a 'series of issues that make the application of this policy elsewhere not possible,' it did not explain what those issues are, nor make a clear claim of undue hardship. Given the above, the agency finds that the revised policy does not comply with the order."

In its Wednesday statement, Via said it revised its policy at the beginning of the week in compliance with the CTA's order.

Murphy said she has a trip planned for Jan. 3, the day the new rules go into effect, and looks forward to seeing them in action.