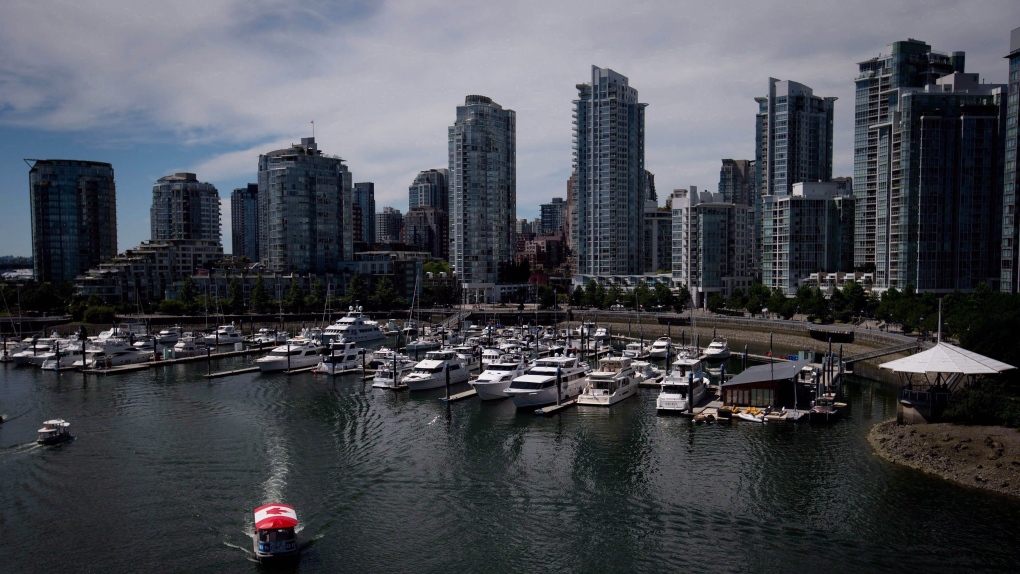 A water taxi travels on False Creek as boats are moored in a marina near Yaletown condo towers, in Vancouver, on July 13, 2014. (THE CANADIAN PRESS/Darryl Dyck)

VANCOUVER - Sales of detached houses continued to fall dramatically in Vancouver last month and even hit a 10-year low in one neighbourhood, real estate agents say as data for the month of September is set to be released.

Realtors say the high-end market is seeing the most substantial losses, while condominium and townhome sectors remain active. A foreign-buyers tax has increased uncertainty, causing investors to pull back while first-time buyers dive in, agents say.

"The speculators and investors, those folks who don't need to buy real estate, they have moved to the sidelines," said Adil Dinani, a Realtor with Royal LePage.

"This could be an opportunity, perhaps, for some people who now don't have to compete with all the other buyers. They can go out there, take their time, make an informed decision and really complete their due diligence."

The Real Estate Board of Greater Vancouver, which covers a large swath of Metro Vancouver but excludes several large suburbs including Surrey, is expected to release its September home sales data on Tuesday.

The numbers are anticipated to provide more insight into the effects of British Columbia's 15-per-cent foreign-buyers tax, which was introduced Aug. 2 after the market already showed signs of cooling.

The tax is one of several policy changes that have been introduced or discussed by governments in recent months. B.C. has also ended self-regulation of the real estate industry, while the City of Vancouver is working on an empty-homes tax.

On Monday, the federal government announced two housing measures that could have an impact on Vancouver's market in the months to come.

As of Oct. 17, all insured mortgages will have to undergo stress tests to determine whether borrowers will still be able to make payments if interest rates rise or they lose their jobs. The government also limited to Canadian residents a tax exemption for capital gains made when homeowners sell their primary residences.

Robert Hogue, a senior economist with RBC, said he expected the mortgage changes to have a bigger impact on the market. There is little data to show how commonly foreign buyers were taking advantage of the tax exemption, he said.

"Today's announcement adds yet another layer of uncertainty to how this will be interpreted by the market," he said, stressing the cumulative effect of all the policy changes.

"I think all of those together are likely to have quite a moderating impact on activity."

Steve Saretsky, a Realtor with Sutton West Coast Realty, completed an independent analysis of September listings and sales data for the region covered by the Real Estate Board of Greater Vancouver.

For the region as a whole, detached home sales fell to their lowest point in September since the same month in 2012, according to Saretsky's analysis. That continued the trend from August, when overall home sales were down to 2012 levels.

"It's obviously a buyer's market for the detached side," Saretsky said.

He said it was still a seller's market for condos, although multiple offers and offer dates are less common than they were during the first half of the year.

Saretsky said while the average price of a detached house may have gone up slightly in September, month-to-month fluctuations are common and overall it's down 17 per cent since peaking in January.

The real estate board has said the average price isn't the best metric because it includes luxury homes. The board prefers to use benchmark price, which is a representation of the typical property sold in the area.

The benchmark price of a detached home fell slightly in August to $1.5 million, a 0.1 per cent drop from the previous month and the first decline in nearly three years, Saretsky said.