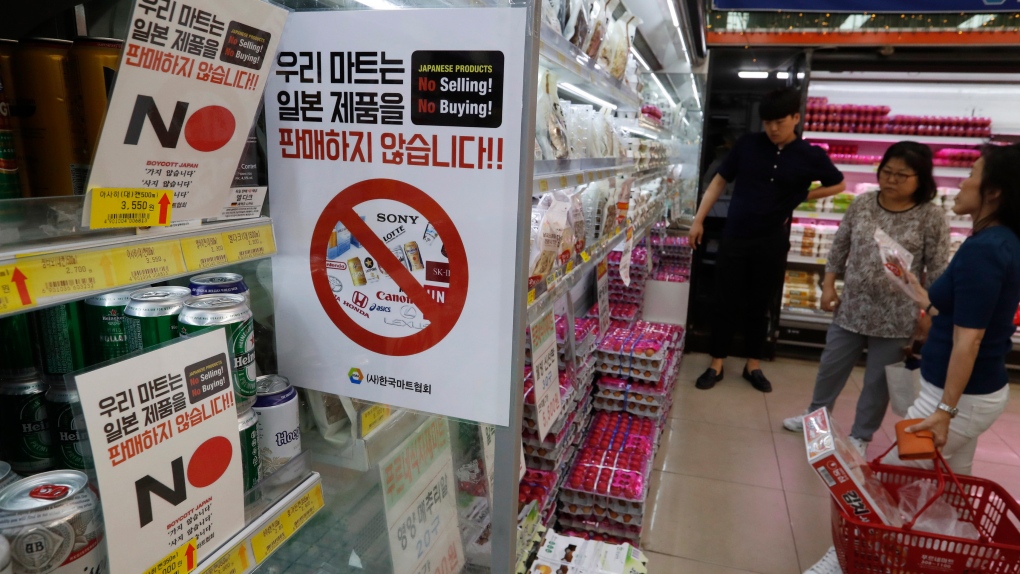 In this Tuesday, July 9, 2019, file photo, notices campaigning for a boycott of Japanese-made products are displayed at a store in Seoul, South Korea. The signs read: "We don't sell Japanese products." (AP Photo/Ahn Young-joon)

SEOUL, Korea, Republic Of -- The United States will "do what it can" to help resolve festering trade and political disputes between South Korea and Japan, a senior U.S. official said Wednesday after a series of meetings with Seoul officials.

David Stilwell, the top U.S. diplomat for East Asian affairs, is in South Korea for three days, as Seoul is seeking U.S. help to resolve the spat between two of America's most important allies in the region.

After meeting with South Korean Foreign Minister Kang Kyung-wha, Stilwell told reporters that the United States places a "great priority on strengthening" its relations with South Korea and Japan.

"Fundamentally ROK and Japan must resolve the sensitive matters and we hope that the resolution happens soon," Stilwell said, using the abbreviation for South Korea's official name, the Republic of Korea. "United States is a close friend and ally to both. We will do what we can to support their efforts to resolve this."

Kim said he explained Seoul's position on the issue to Stilwell in details. Kim said Stilwell "sufficiently understood the seriousness of this problem."

South Korea and Japan are closely linked economically and culturally and host a total of about 80,000 U.S. troops on their soils, the core of America's military presence in the region. But they are often embroiled in historical and territorial disputes stemming from Japan's 1910-45 colonial occupation of the Korean Peninsula. Such on-and-off disputes have complicated U.S. efforts to bolster trilateral co-operation to cope with North Korea's nuclear threats and China's growing influence.

The latest dispute flared after Japan tightened controls on high-tech exports to South Korea, potentially affecting its manufacturers and global supplies of high-tech products like smartphones and displays.

Japan has denied that, maintaining that the sensitive materials subject to the stricter approval process can be exported only to trustworthy trading partners. Some Japanese officials including Prime Minister Shinzo Abe have suggested that critical materials with potential military applications exported to South Korea may have been eventually transferred to North Korea. Seoul denies that.

Japan maintains that all colonial-era compensation issues were settled in 1965 when the two countries signed a treaty that restored their diplomatic ties. At the time, South Korea received more than $800 million in economic aid and loans from Japan and used the money to rebuild its infrastructure and economy devastated by the 1950-53 Korean War.

Tokyo has requested third-party arbitration of the Korean wartime labour dispute as stipulated in a 1965 treaty. The deadline for a response is Thursday, and Seoul has indicated that it will not respond.

Associated Press journalists Kim Yong-ho in Seoul and Mari Yamaguchi in Tokyo contributed to this report.