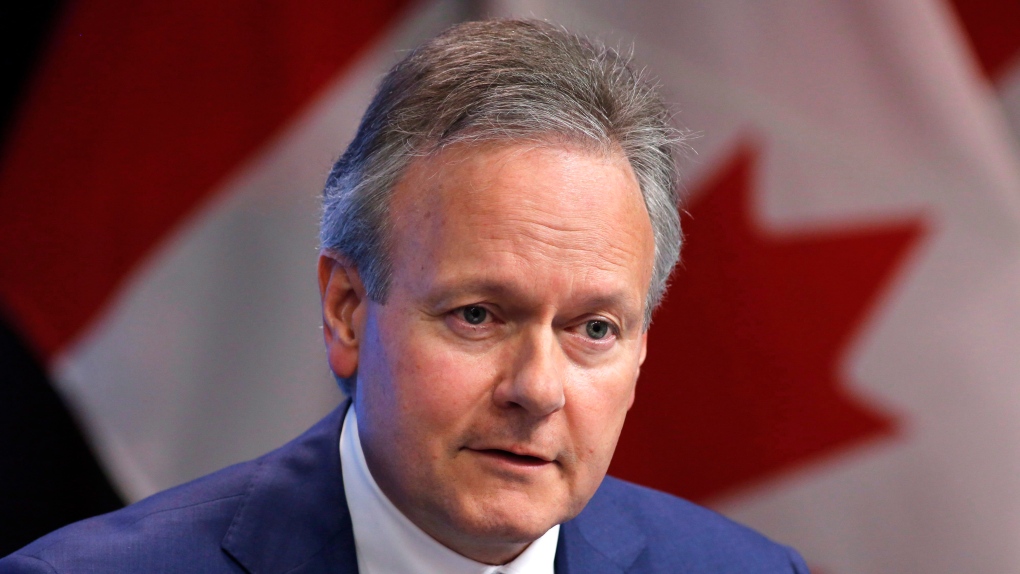 Bank of Canada Governor Stephen Poloz speaks at a press conference after releasing the June issue of the Financial System Review in Ottawa on Thursday, June 7, 2018. (THE CANADIAN PRESS / Patrick Doyle)

OTTAWA -- The impacts of both the escalating cross-border trade fight and new mortgage rules will "figure prominently" for the Bank of Canada ahead of its upcoming interest-rate decision, governor Stephen Poloz said Wednesday.

The central bank has been incorporating into its projections the fallout of U.S. steel and aluminum tariffs as well as retaliatory measures by Canada and others, Poloz told a business audience in Victoria.

In the lead-up to his July 11 rate announcement, the bank has also kept its focus on incoming, individual-level data that shows the effects of Canada's new lending rules on the housing market and mortgage renewals.

"We expect these issues to figure prominently in our upcoming deliberations," Poloz told the Greater Victoria Chamber of Commerce.

His next rate decision will arrive in the middle of an unlikely trade dispute between next-door neighbours that's expected to hurt both economies.

The Trump administration announced it would slap punitive tariffs on Canada and other allies on May 31 -- a day after Poloz made his last interest-rate announcement.

Since then, however, there have been growing doubts Poloz will hike next month.

"It seems that Poloz, like the market, may be for now on the fence for a July hike," CIBC chief economist Avery Shenfeld wrote Wednesday in a research note.

"We'll stick to our call that rates will indeed rise in July, but it's a close one."

The Trudeau government has responded to the U.S. tariffs by threatening to impose levies of its own on many U.S. products in a reprisal that's set to take effect Sunday.

The deterioration of U.S. trading relationships with Canada and other key economies around the world has also raised concerns of a global trade war.

And more trouble could lie ahead.

Trump has also threatened to apply tariffs on automotive imports, which many warn would have far greater consequences for the Canadian economy than the U.S. levies on steel and aluminum.

Other factors have also complicated Canada's interest-rate outlook since Poloz's last announcement on May 30. They've included unexpectedly weak inflation and retail sales numbers, and expectations that Friday's reading for real gross domestic product for April will show a decline.

On Friday, the Bank of Canada will provide more clues about its rate decision when it releases its latest quarterly poll of companies across the country. The business outlook survey provides a sense of business sentiment in Canada.

In addition to the economic data, the bank's policy-makers must consider the long list of unknowns faced by the Canadian economy, such as the difficult renegotiation of the North American Free Trade Agreement.

In Wednesday's speech, Poloz listed some of those uncertainties: how much trade policy is holding back business investment, how new mortgage rules are affecting the housing market and how sensitive households are to higher interest rates considering all the debt they've been amassing.

"There is always a degree of uncertainty when using economic models, but these days there is a litany of things we simply do not know," Poloz said.

"With all these uncertainties, setting monetary policy is a matter of risk management... This is why we say that the bank is particularly data-dependent right now."

On mortgages, the bank is studying the effects of tougher rules, which have included new stress tests for would-be borrowers.

Poloz has introduced three rate hikes since last July following an impressive economic run for Canada that began in late 2016.

But he's kept the benchmark rate at 1.25 per cent since January as the bank continues its careful process of determining the best timing for its next hike.

In a news conference that followed his speech, Poloz said the bank will continue to focus on concrete data it can actually model rather than trying to follow political rhetoric.

The firmer numbers that can be crunched include the tariffs, the retaliatory measures and the tangible impacts of trade uncertainty like business investment figures, he said.

Poloz also stressed that instead of following the "bumps and wiggles" of smaller data points, he prefers the more-important numbers like real GDP and inflation, both of which he noted have matched the bank's predictions.

TD senior economist Brian DePratto said Poloz's monetary policy decisions may not come in response to monthly noise in the data, but he believes the elevated uncertainty will be taken into account.

"The broader economic outlook may be developing in line with the bank's expectations, but this uncertainty will temper the implications," DePratto wrote in a research note, which highlighted the upcoming releases for GDP, credit data and the business outlook survey as key indicators to watch before the rate announcement.

"In light of today's remarks, the burden of proof, and thus the likelihood of a July move hinges on seeing upside surprises."

The theme of Poloz's address Wednesday focused on the Bank of Canada's ongoing efforts to provide more transparency and clarity on its decisions and to make economic issues more accessible to a broader section of the general public.

"The challenge for us is to make sure that when we have a message to deliver, you will not need a degree in economics to understand it," he said.