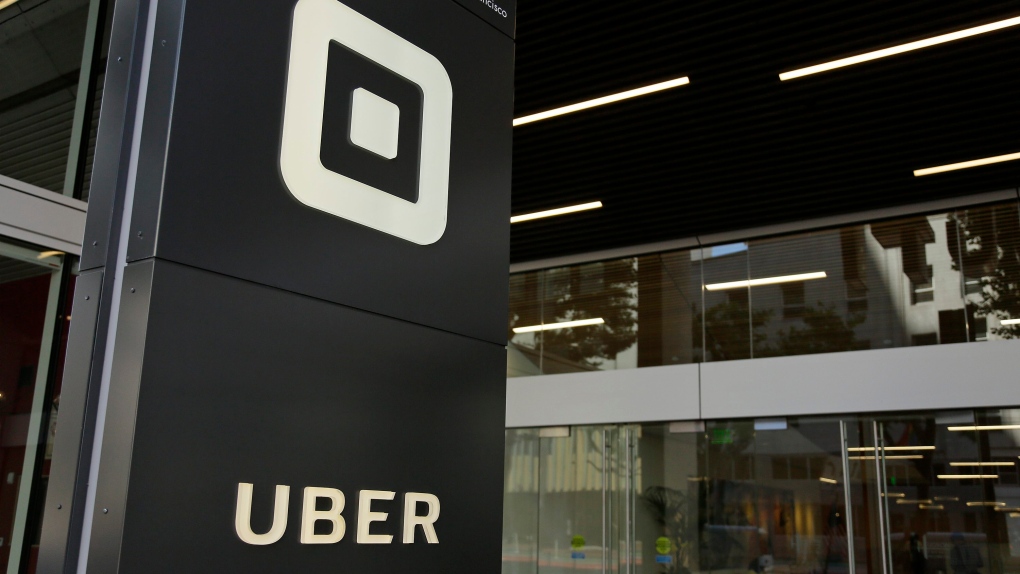 The building that houses the headquarters of Uber is seen in San Francisco on Wednesday, June 21, 2017. (AP / Eric Risberg)

LONDON -- Uber drivers in Britain are entitled to benefits like paid holidays and minimum wage, the country's top court ruled Friday, in a decision that threatens the company's business model and holds broad implications for the gig economy.

The ruling that the drivers should be classed as “workers” and not self-employed is a big defeat for the ride-hailing giant. And it could inspire similar legal action against other companies who rely on gig workers as well as influence courts in other countries grappling with the issue, experts said.

“This ruling will fundamentally re-order the gig economy and bring an end to rife exploitation of workers by means of algorithmic and contract trickery,” said James Farrar said by email. The pair took Uber to the tribunal in 2016, which ruled in their favour. The decision was upheld in two rounds of appeals before it arrived at the Supreme Court.

San Francisco-based Uber, which has 65,000 active drivers and 5 million regular users in the U.K., had argued that Aslam and Farrar were independent contractors. The company said it respected the court's decision, which it argued focused on a small number of drivers who used the Uber app in 2016.

“Since then we have made some significant changes to our business, guided by drivers every step of the way,” Jamie Heywood, Uber's regional general manager for Northern and Eastern Europe, said in a statement. “These include giving even more control over how they earn and providing new protections like free insurance in case of sickness or injury.”

Heywood said the company would consult with its U.K. drivers to understand the changes they want.

The ruling clarified that drivers are considered to be on the job when they are logged in to the Uber app in their territory and ready and willing to accept rides, which could be used to calculate minimum wage and holiday pay. Uber had argued that drivers were only working when they were making a journey with a paying passenger.

The case is now expected to return to the employment tribunal for decisions on compensation over lost pay for about two dozen drivers involved in the original claim. Another 2,000 drivers' cases had been stayed pending the decision. Drivers could be entitled to an average of 12,000 pounds ($16,800), estimated law firm Leigh Day, which is representing drivers.

Uber drive Conrad Delphine looked forward to getting paid time off after years of working without holiday or sick pay.

“I am very pleased. It means I can go on holiday without having to worry about how to pay for it,” Delphine said. “Things have been worse because of coronavirus. If we catch the virus we should be entitled to sick pay. It's about time we had some decent pay and conditions.”

Uber and other app-based ride-hailing services avoided a similar attempt in California to classify drivers as employees eligible for benefits and job protections. The companies bankrolled Proposition 22, a ballot measure exempting them from the state's gig-economy laws by keeping drivers classified as independent contractors able to set their own hours. Voters approved it in November.

The British judges on Friday cited a number of factors in their decision: Uber sets fares and contract terms and penalizes drivers who reject or cancel rides. It also uses passenger ratings to control drivers and minimizes communications between drivers and passengers, which results in the service being “very tightly defined and controlled by Uber.”

“Drivers are in a position of subordination and dependency to Uber,” with little ability to improve their economic position and the only way to increase their earnings is by “working longer hours while constantly meeting Uber's measures of performance,” said judge George Leggatt, as he read out a summary of the ruling on a court livestream.

Uber said some features cited in the ruling no longer exist, noting that since 2017 drivers face no repercussion for rejecting multiple consecutive trips.

Providing more benefits for its drivers is likely increase costs for Uber, which already was struggling to make a profit and had previously run into regulatory trouble in London, where authorities had sought to revoke its license. The changes could ultimately push up fares for riders, experts say.

Experts said the ruling does not have a major immediate impact on other companies because the judges cited business practices specific to Uber, which in the U.K. has to operate under specific regulations governing minicabs.

“That being said, whilst it's not going to automatically make all gig economy workers have those rights, it's obviously going to make people alive to the potential for bringing those claims” in court, said Joe Aiston, a senior associate at law firm Taylor Wessing. “And you wouldn't be surprised to see more claims coming in against other similar businesses.”

Aiston said the ruling could act as reference for courts and regulators outside Britain grappling with similar issues, such as the European Union's executive Commission, which is due to publish recommendations next week on how to regulate gig economy platform workers.

Ahead of that review, Uber CEO Dara Khosrowshahi published a white paper this week urging the EU to adopt laws that encourage “flexible and decent earning opportunities” and suggested they could adopt legislation similar to California's, along with other ideas such as a portable benefits fund.