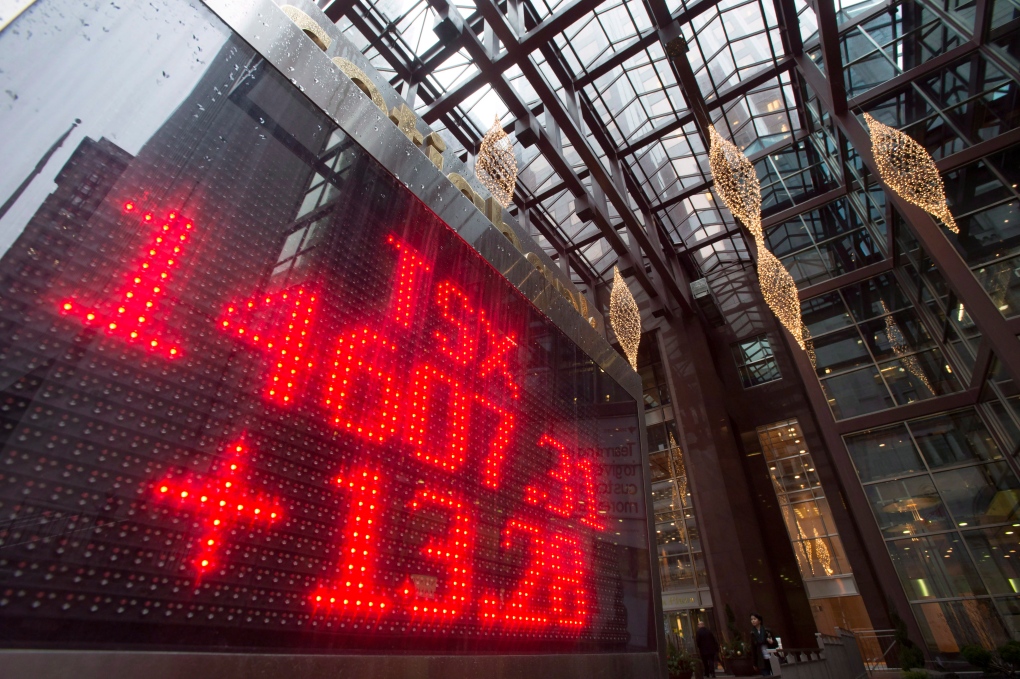 A sign board displays the Christmas Eve close of the TSX in Toronto on Wednesday, Dec. 24, 2014. (Frank Gunn / THE CANADIAN PRESS)

TORONTO -- Canada's main stock index was up modestly Thursday as investors on both sides of the border avoided making any major moves ahead of the latest round of jobs figures.

In corporate news, the head of the country's biggest bank told shareholders that he's "increasingly concerned" about the housing markets in Toronto and Vancouver, and would welcome all three levels of government interventions.

Royal Bank CEO Dave McKay's comments follow recent reports this week that the average home price in the Greater Toronto Area in March was $916,567, up 33.2 per cent from last year.

In Metro Vancouver, the composite benchmark price for all residential homes was $919,300 last month, up 12.7 per cent from a year ago, according to data from the city's real estate board.

The financial sector, which has benefited from the hot Canadian real estate market, was up 0.27 per cent. Shares in Royal Bank (TSX:RY) saw an uptick of 0.79 per cent, or 88 cents, to $97.81 on the Toronto Stock Exchange.

Meanwhile, media company Postmedia (TSX:PNC.B) reported a 13.5 per cent decline in second-quarter revenue but a much smaller loss than it recorded last year. Its shares held steady at 69 cents.

In currencies, the Canadian dollar finished slightly ahead, climbing 0.05 of a cent at 74.53 cents US.

In New York, indices were relatively flat, with investors seemingly hitting the pause button until the latest jobs figures for March are released Friday in Canada and the U.S.

"The jobs numbers will really be what will be driving the market tomorrow," said Jonathan Pinsler, a portfolio manager and senior vice-president at TD Wealth.

"The markets are anticipating decent jobs figures but we'll see."

It's expected that the U.S. jobs report will show that employers added 178,000 jobs last month, according to a survey of economists by the data provider FactSet.

On Wednesday, a survey by payroll processor ADP had showed that private businesses added 263,000 jobs in March, the most since December 2014.

The U.S. Labor Department said weekly applications for unemployment aid plunged 25,000 to a seasonally adjusted 234,000. The weekly figure has remained below 300,000 -- a level linked with job growth -- for 109 weeks. That's the longest such stretch since 1970 when the U.S. population was much smaller.

In commodities, the May crude contract was higher for a third day in a row, up 55 cents at US$51.70 per barrel and May natural gas contracts gained seven cents at US$3.33 per mmBTU.