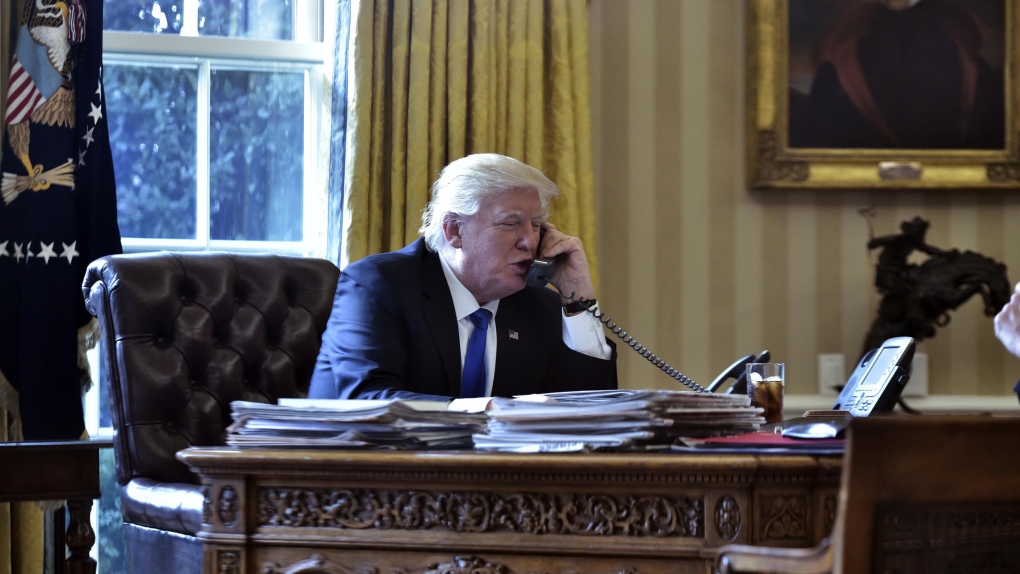 Regulators are looking into the deal that would bring Donald Trump's new social media company to the stock market, one that has attracted both legions of fans of the former president and people looking to make a quick profit.

The company partnering with Trump Media & Technology Group acknowledged the inquiries in a filing it made with regulators on Monday. It also gave some financial forecasts for the company, which wants to rival Twitter and other platforms that banned Trump after the Jan. 6 Capitol riots, along with Netflix and other streaming video services. It said over the weekend that it's lined up US$1 billion in investments from a group of unnamed institutional investors.

Separately, Trump Media announced that Rep. Devin Nunes, a Republican from California, will leave Congress to become the company's chief executiv e in January. Nunes, the former chair of the House Intelligence Committee, was an ardent backer of Trump's during probes into Russian interference in the 2016 election and the president's 2019 impeachment by the Democratic-led House.

The regulatory scrutiny is focused on the October announcement by Trump's media venture that it would merge with Digital World Acquisition Corp. That company had launched on the U.S. stock market three weeks earlier with the sole purpose of finding a privately held company to buy. It's often referred to by its trading symbol of "DWAC."

DWAC said Monday that it is cooperating with "the preliminary, fact-finding inquiries" by the Securities and Exchange Commission and the Financial Industry Regulatory Authority.

Trump dimissed the request for documents as a political attack on him.

"You know, this is just a continuation of witch hunts," he said on the conservative channel Newsmax Monday night. "Anything you do they want to look at it."

The SEC early last month requested documents related to meetings of DWAC's board and communications between DWAC and Trump's media venture, among other things. According to DWAC, the SEC's request said the commission's "investigation does not mean that the SEC has concluded that anyone violated the law or that the SEC has a negative opinion of DWAC or any person, event, or security."

The SEC could be looking at whether DWAC and Trump's company had any conversations about a deal before DWAC's own initial public offering of stock, said Jay Ritter, a professor at the University of Florida who is an expert on IPOs.

Under rules for these blank-check companies, known as special-purpose acquisition companies, or SPACs, they're not supposed to line up acquisition targets before selling their own shares. Senator Elizabeth Warren on Nov. 17 wrote a letter to the SEC's chair, Gary Gensler, asking if the agency is exploring whether DWAC had violated the law by holding such discussions and misleading potential investors by failing to inform them before its IPO.

Asked how worried he would be about the SEC's investigation if he were on the receiving end, Ritter said, "It depends on what I knew. This could be innocuous or pro-forma stuff, or it could be really serious."

Just what the regulators are probing is not clear. What's more, the regulatory rules on SPAC discussions with targets are gray, prohibiting only "substantive" talks with possible acquisition targets.

Still, the Trump deal stood out as unusual in many ways even before an Oct. 29 report from the New York Times said that DWAC CEO Patrick Orlando had met with Trump and his representatives before taking DWAC public. Blank-check companies typically buy businesses with employees, customers and a track record, which is not the case with the Trump deal. Several SPAC experts also said the three weeks it took for DWAC to find and strike a deal with TMTG was unusually fast.

DWAC and TMTG did not respond to requests for comment on Monday.

An SEC spokesperson declined to comment beyond saying, "The SEC does not comment on the existence or nonexistence of a possible investigation."

Separately, the Financial Industry Regulatory Authority, or FINRA, asked in late October and early November for a review of trading in DWAC's stock before the Oct. 20 merger deal was announced. That could be an indication of a search for insider trading, Ritter said, though it's a notoriously difficult thing to prove.

The merger announcement sent DWAC's stock surging from $9.96 to $94.20 in just two days as Trump supporters and investors looking to make a fast buck piled in. The shares have since pulled back to roughly $44. On Monday, the shares closed down 2.6% at $43.81.

Such a lofty price indicates high expectations for Trump's media venture among at least some investors. In its filing with regulators, DWAC also gave some financial forecasts for the company, which has yet to launch but wants to build a "non-cancellable" global community.

The presentation included forecasts that the company's TRUTH Social service may have 81 million users by 2026, or nearly 7 million more people than voted for Trump in the last U.S. presidential election.

SPACs generally are known for giving very optimistic forecasts about their future growth in presentations to investors.

In five years, TMTG is forecast to generate nearly $3.7 billion in revenue, according to the filing. That is more than the annual revenue of retailer Restoration Hardware, RV maker Winnebago Industries and entertainment giant iHeart Media, which owns more than 800 radio stations.

For its TMTG+ video service that will stream "non-woke" entertainment and news, it says the monthly fee per user could be $9 in 2026. Netflix, in comparison, got $14.49 in average revenue from its U.S. and Canadian members during the first nine months of this year.

In the statement announcing his appointment as CEO, Nunes said, "The time has come to reopen the Internet and allow for the free flow of ideas and expression without censorship."