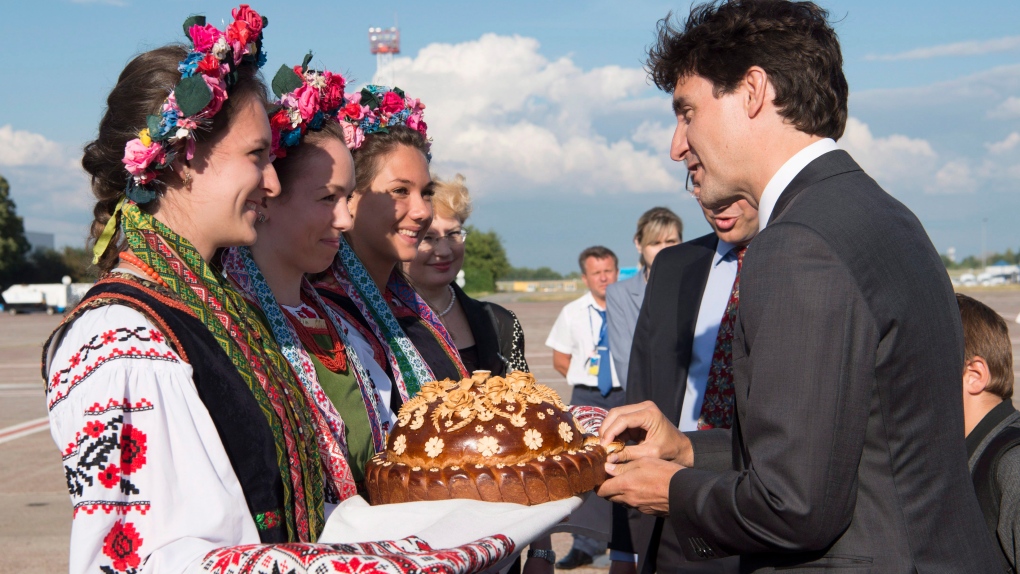 Canadian Prime Minister Justin Trudeau is greeted by women in traditional dress and bread as he arrives in Kyiv, Ukraine, on Sunday, July, 10, 2016. (THE CANADIAN PRESS/Adrian Wyld)

KYIV, Ukraine -- Prime Minister Justin Trudeau will sign a long-awaited free trade deal with Ukraine on Monday before paying his respects to those who fought and died in the country's revolution, known as the Euromaidan, two years ago.

Trudeau flew into Kyiv on Sunday after an emotional tour of the infamous Auschwitz-Birkenau concentration camp in neighbouring Poland, where he warned against intolerance and offered a message of love and acceptance.

Remembrance has emerged as key feature as the prime minister will spend Monday morning visiting different sites in the Ukrainian capital where the Soviets and Nazis perpetrated mass atrocities against the local populace throughout the 20th century.

The focus will then turn to trade when Trudeau meets Ukrainian President Petro Poroshenko. Trade talks were launched by the Conservatives in 2009, but stalled four years later when pro-Russian president Viktor Yanukovych was elected. They resumed after Yanukovych was forced from power.

The deal is not the biggest for Canada or Ukraine, but Ukrainians are hoping it will facilitate the country's continued shift west toward Europe and away from Russia, as well as spur more Canadian investment in the country.

Afterward, Trudeau will visit the Maidan, Ukraine's independence square, where popular protests in early 2014 forced Yanukovych from power and ushered in what Ukrainians hope is a new era for the country. More than 100 people were killed in clashes between police and demonstrators.

A key message throughout the visit will be Canada's enduring support for Ukraine, particularly after Russia seized Crimea following Yanukovych's ouster and started supporting separatist rebels in the east of the country.

However, Trudeau will also review Ukrainian efforts to stamp out corruption, which many have blamed for the country's continued problems since the fall of the Soviet Union 25 years ago.