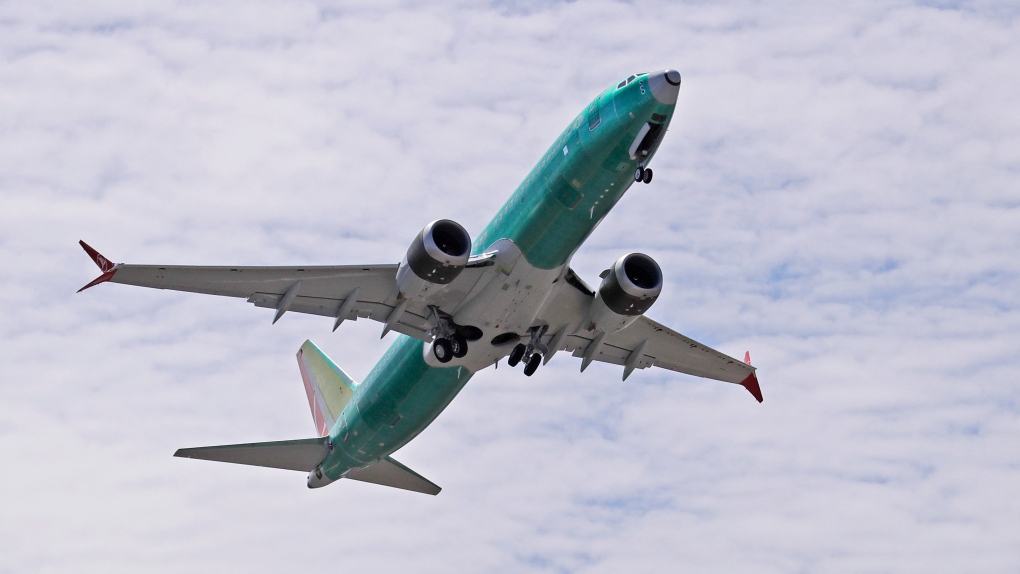 In this May 8, 2019, file photo, a Boeing 737 MAX 8 jetliner being built for Turkish Airlines takes off on a test flight in Renton, Wash. (AP Photo/Ted S. Warren, File)

OTTAWA -- A Transport Canada official is urging global aviation regulators not to let Boeing's 737 Max 8 aircraft fly again until the company removes anti-stall software that has been tied to two crashes that killed 346 people.

The federal department has confirmed the authenticity of an email sent last week to aviation regulators in the United States, Brazil and the European Union by Jim Marko, manager of aircraft integration and safety assessment at Transport Canada.

In that email, first reported by the New York Times, Marko expressed uneasiness with Boeing's attempts, so far unsuccessful, to find a fix for the software known as MCAS.

"Judging from the number and degree of open issues that we have, I am feeling that final decisions on acceptance will not be technically based," he wrote.

"This leaves me with a level of uneasiness that I cannot sit idly by and watch it pass by ... The only way I see moving forward at this point (and I say at this point because it's almost Christmas and we can always believe in miracles) is that MCAS has to go."

In a statement, Transport Canada said Marko's email "reflects working-level discussions between highly trained aircraft certification experts of key aviation authorities who have been given wide latitude for assessing all issues and looking at all alternatives for the safe return to service of the aircraft."

The department added that Marko's views "have not been subject to systematic review by Transport Canada."

The Max 8 has been grounded worldwide since March, shortly after Ethiopian Airlines Flight 302 crashed after taking off from Addis Ababa, killing all 157 people on board.

That followed a similar crash of another Max 8 in October 2018 shortly after takeoff from Jakarta, Indonesia, killing 189 people.

The MCAS software, which automatically pushes the nose of the aircraft down in certain circumstances, has been fingered for blame in both crashes.

The New York Times reported last week that Marko's concerns about trying to fix MCAS are shared by at least one official at the Federal Aviation Administration in the U.S.

"I have held similar perspective (questioning the need for MCAS, at least from the system safety standpoint)," Linh Le, a system safety engineer, wrote in a separate email to colleagues at the FAA, obtained by the Times.

Le also circulated Marko's email, summarizing that the Canadian official believes "MCAS introduces catastrophic hazards that weren't there before," that fixing it would "add too much complexity" and that revisions to the software have been little more than Band-Aids.

This report by The Canadian Press was first published Nov. 25, 2019.