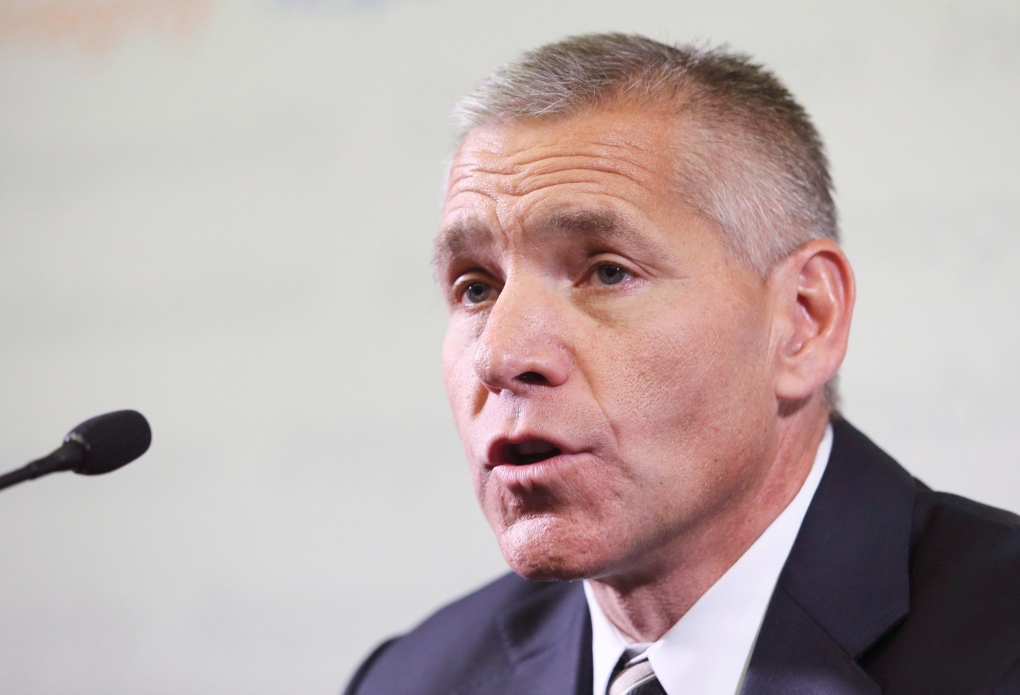 Russ Girling, President and CEO of TransCanada Corp. speaks at a press conference after the company annual meeting in Calgary on April 29, 2016. (Mike Ridewood / The Canadian Press)

CALGARY -- TransCanada Corp. (TSX:TRP) is still not prepared to offer a firm timeline for the completion of the Keystone XL pipeline, its top executive said on Friday, even after U.S. President Donald Trump granted the project a permit in March.

TransCanada CEO Russ Girling said that both the proposed Keystone XL and Energy East projects, which are fiercely opposed by many environmentalists, sit in the company's longer-term bucket because of the difficulty of getting them done.

"We've been at them for a long time, so it's hard to say with any credibility that we're going to get it done by a date," he told the company's annual general meeting.

Girling said TransCanada will instead look to its multitude of projects in the $500 million to $1 billion dollar range - which he said are are much easier to permit - to help deliver its projected eight to 10 per cent dividend growth through the rest of the decade.

"What's driving our growth and the focus of the company is the $23 billion of things that we've got under construction, and the organic growth that's naturally going to come from that activity," he said.

The cautious approach comes even as Keystone XL looks more possible than it has in years given Trump's support. Trump's predecessor, Barack Obama, rejected the project in 2015 after environmentalists argued it would spur the development of Alberta's oil sands and worsen climate change.

The pipeline still faces a regulatory challenge in Nebraska, where there has been significant landowner opposition, in part because of concerns about the risk of contamination of a major aquifer.

TransCanada expects hearings in the state to begin in August, with a final decision in November, while it also continues to work on some federal permits and updating shipping contracts on the line.

Energy East is further behind, still waiting for Canada's National Energy Board to set new hearing dates for the review.

Girling said the company would increase its public relations outreach as it works to push the projects forward, including increased industry co-ordination and a new website designed to be more accessible to a younger demographic.

The industry "hasn't done a great job itself of telling its story," he said.

The efforts on oil pipelines come as TransCanada's other segments showed strong returns in the last quarter, with the company's US$13-billion acquisition of natural gas transporter Columbia Pipeline Group helping to more than double profits from a year ago.

Revenue was $3.39 billion, up from $2.5 billion in the first quarter of 2016 and about $200 million above analyst estimates, as both its U.S. and Mexico-based natural gas segments performed well.

After adjustments, TransCanada's comparable earnings were 81 cents per share for its most recent quarter.

Analysts had expected 74 cents per share, according to Thomson Reuters data.