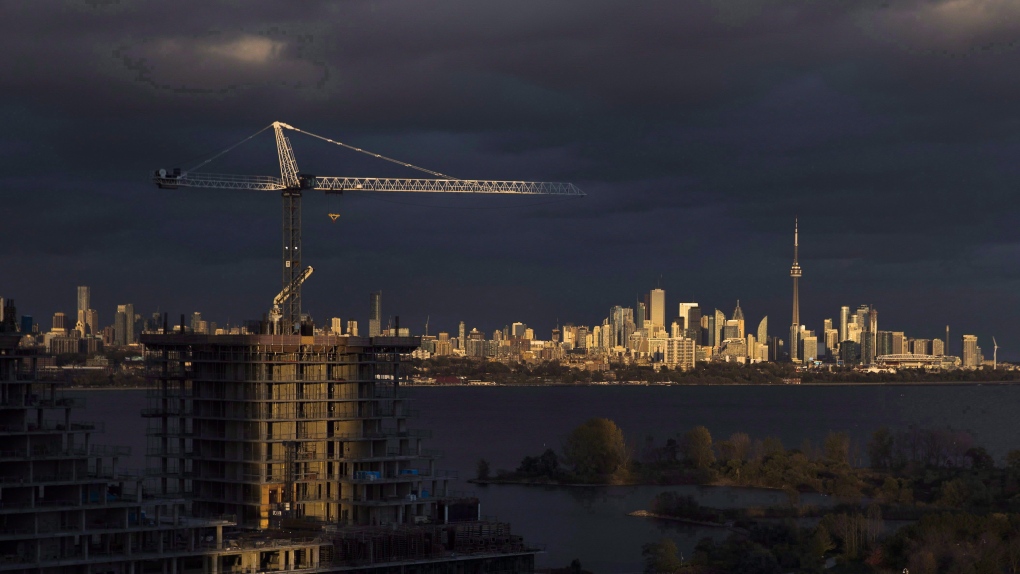 Condominiums are seen under construction in front of the skyline in Toronto, Ont., on Tuesday October 31, 2017. Home sales in Toronto and the surrounding area saw a small uptick in January, a sign that the real estate market in Canada's largest city remains stable. THE CANADIAN PRESS/Mark Blinch

TORONTO -- Canada's largest real estate board is calling on Ottawa to revisit whether a stricter mortgage stress test introduced last year is still needed, arguing that the policy has negatively impacted the economy and Toronto's once red-hot housing market.

"While we saw buyers return to the market in the second half of 2018, we have to have an honest discussion on whether or not today's homebuyers are being stress tested against rates that are realistic," said John DiMichele, chief executive of the Toronto Real Estate Board (TREB) in a statement Wednesday.

"Home sales in the GTA, and Canada more broadly, play a huge role in economic growth, job creation and government revenues every year. Looking through this lens, policymakers need to be aware of unintended consequences the stress test could have on the housing market and broader economy."

The OFSI-mandated stress test, which came into effect in 2018, cooled housing markets in Toronto and Vancouver by limiting the ability of those with a more than 20 per cent down payment to qualify for mortgages.

The stricter rules requires borrowers to prove that they can service their uninsured mortgage at a qualifying rate of the greater of the contractual mortgage rate plus two percentage points or the five-year benchmark rate published by the Bank of Canada. The policy also reduced the maximum amount buyers would be able to borrow to buy a home.

An existing stress test already required those with insured mortgages to qualify at the central bank's benchmark five-year mortgage rule.

On Tuesday, OFSI assistant superintendent Carolyn Rogers defended the stricter rules, saying that a "margin of safety" was still "prudent" in the current economic climate. She also said the group was open to changes when warranted.

TREB, which represents more than 52,000 real estate agents across the region, says under the stress test rules, homebuyers have to qualify for monthly mortgage payments nearly $700 more than what they would actually pay.

"In order to account for the higher qualification standard, intending home buyers have adjusted their preferences, including the type of home they intend on purchasing," said the report, resulting in the increased popularity of condos and townhouses over detached homes.

Realtor Tom Storey says demand in the Toronto housing market remains strong despite the stress test rules, noting that a bungalow in east Toronto he visited last month with a client garnered 21 bids and sold for more than $200,000 over asking. He says there are still many buyers out there, but the problem is that inventory is drying up, especially in these slow winter months.

Storey says he doesn't think doing away with the stress test would result in a more equitable real estate market.

"I am no longer seeing prices that make me scratch my head," he said. "The properties that are priced correctly are selling quickly and the ones that are overpriced are sitting on the market. That's what a healthy market should be like. We had a 10-year run of serious price growth and we're going to go back to more moderate levels now."

Despite the challenges, TREB says it expects to see a "moderate improvement" in sales and sale price this year in Toronto's real estate market but doesn't anticipate either to hit the record levels seen in previous years.

The board says other factors such as population growth, low unemployment rates and potentially stable interest rates will help Toronto's housing market this year.

The Bank of Canada has raised the benchmark rate five times since mid-2017, encouraged by a stronger economy, and signalled that more rate increases are likely but will come about slower than originally expected.

Much of that price growth will be led by the hot condominium market as homebuyers look for more affordable housing options, while the board anticipates the price growth for detached properties to be below the average growth rate for the total market.

The report also cautions that the rental market in Toronto and the surrounding area will remain "tight" this year.

"The supply of rental units could continue to be problematic in 2019," it warned.

The board also reported Wednesday that home sales in Toronto and the surrounding area saw a small uptick in January, a sign that the real estate market in Canada's largest city remains stable.

TREB says there were 4,009 home sales recorded in January, up 0.6 per cent compared with January 2018. On a seasonally adjusted basis, sales were up by 3.4 per cent versus December 2018.

The board says the average selling price for all property types was $748,328 last month, an increase of 1.7 per cent from the same month a year ago. TREB reports that the more affordable condo segment led the price growth, up by 7.9 per cent in January.

Semi-detached and townhouse properties also saw increases, while the price of detached homes fell by 2.8 per cent in January year-over-year.

The board says the total number of new listings were up, climbing 10.5 per cent to 9,456 listings last month.

With files from Armina Ligaya