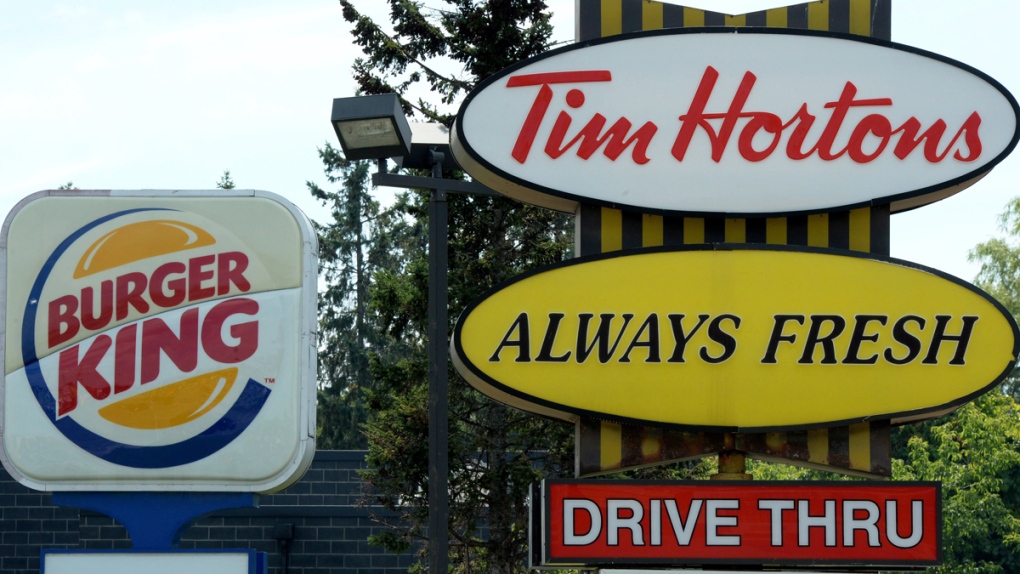 A Burger King sign and a Tim Hortons sign are displayed on St. Laurent Boulevard in Ottawa on August 25, 2014. (THE CANADIAN PRESS / Sean Kilpatrick)

Plans to expand Tim Hortons into more countries will take at least a year to materialize as its new owners decide how to grow the popular Canadian brand that recently merged with Burger King.

Daniel Schwartz, the 34-year-old chief executive who oversees the combined parent company, Restaurant Brands International Inc. (TSX:QSR), said Tuesday that a year is a reasonable amount of time considering his experience with the takeover of Burger King.

"We can rush into this and sign a whole bunch of agreements, but we think (this is) the prudent way to do this," Schwartz said in an interview after Restaurant Brands posted a $500-million loss in the fourth quarter, mostly from merger expenses.

"It takes some time to make sure you have the right partners, the right supply chain and the right approach."

Schwartz declined to outline which regions are prime destinations for new Tim Hortons restaurants, although he said the model would be similar to Burger King's expansion into Brazil, China and Russia.

Tim Hortons already has locations in the Middle East and the United States but the majority of its 4,500 Tim Hortons restaurants are in Canada.

Executives at Restaurant Brands have been outspoken about making Tim Hortons a global brand, though they faced criticism last year by some who perceived the merger to be hinged on relocating Burger King's head office to Canada for a lower tax bill, a move known as a corporate tax inversion.

Restaurant Brands is majority owned by Brazilian-based 3G Capital, which took over Burger King for US$4 billion in 2010, restructured its operations and cut expenses.

Last year, 3G Capital signed a US$11-billion merger with Tim Hortons that brought the both companies under one umbrella.

"What will define the success of this transaction is our ability to bring Tim Hortons around the world," Schwartz said.

"This deal is first and foremost about growth."

"Many of the franchisees operating Burger King would take this on as a second brand," she said in an interview.

"Not from a concept or operating perspective, but from an ownership perspective."

The result included $143 million of losses related to derivatives and $94.3 million attributed to the Tim Hortons deal and restructuring costs.

It was the first glimpse into the newly combined operations and RBC Capital Markets analyst David Palmer called the financial results "noisy."

Restaurant Brands plans to keep each company separate, both in its financial results and through its daily store operations. That means Timbits won't be listed alongside Whoppers on the menu and Burger King restaurants won't spring up beside Tim Hortons.

Last month, Tim Hortons cut about 350 employees, or about 15 per cent of its 2,300 employees. The cuts, mainly at headquarters in Oakville, Ont., and regional offices across the country, are largely complete, chief financial officer Josh Kobza said during a conference call.

"We don't have any plans for additional changes at this time," he added.