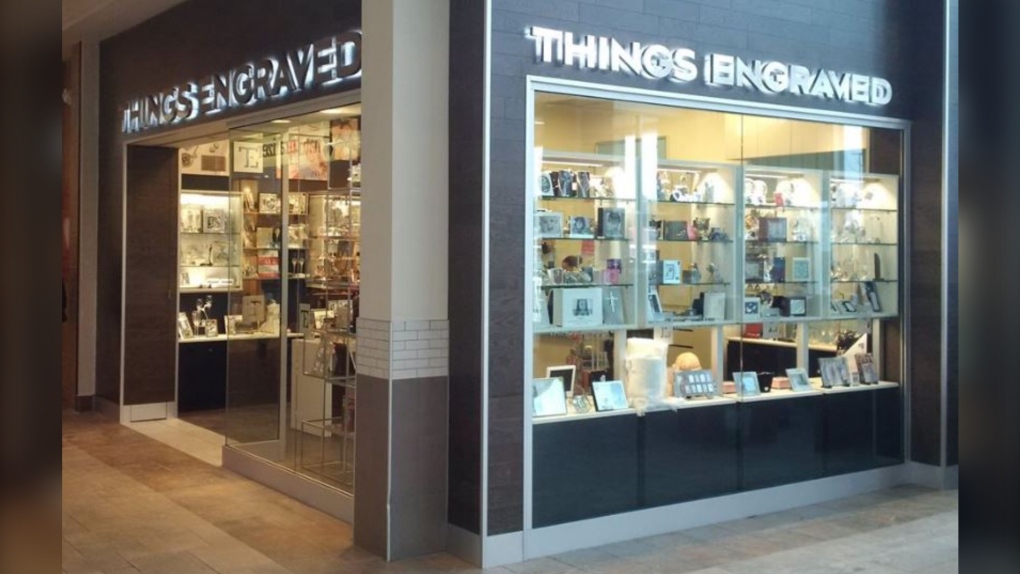 TORONTO -- The CEO of a Canadian retailer that suddenly terminated its entire workforce last week admits the company had been unprofitable for several years and simply couldn’t compete with online retailers such as Amazon.

“Unfortunately when a business costs more money than it makes every day, time is of the essence to close so the business doesn’t eat itself, if you will,” Things Engraved CEO Shawn Brock told CTVNews.ca in a phone interview Tuesday.

Nearly 300 workers lost their jobs last week when Things Engraved, a company that sold personalized gifts and engraving services in malls across Canada, announced that it would be closing all of its 73 stores.

Employees received letters last Thursday informing them that they would be let go immediately “as a result of financial difficulties over the last few years.” Several employees who spoke with CTVNews.ca voiced frustration and anger, saying that being terminated so soon after the holidays made it feel as if the company didn’t care about them.

“We absolutely care and I think certainly value the service they’ve put in and their commitment to the business,” Brock said.

He said the company’s ownership, Serruya Private Equity, ultimately made the decision last week to cease operations. The timing, while sudden, was done so the company would have enough money to pay out employees, Brock said.

“The reality is we know it’s very abrupt and regrettably tough to deal with at a time like this,” he said. “We wanted to assure them they would be paid in lieu of the required notice period.”

Store managers were only given one day to contact customers with engraved items they hadn’t picked up yet, including pieces like an engagement ring and a memorial plate for a funeral.

Many of those items have yet to be returned, and all Things Engraved locations are now closed. The company is now working with malls to help customers retrieve those items.

“We’ll do everything we can with the landlords,” Brock said.

A series of factors came together in the last few years that made it challenging for the business, which first opened its doors in 1982, to turn a profit.

For many years, Things Engraved had a concession partnership with Sears that allowed the company to operate kiosks within Sears’s mall footprint. This arrangement ended when Sears declared bankruptcy in 2017, leaving 15,000 people out of work.

Sears’s demise meant that Things Engraved lost nearly 24 of its stores – some of them the most profitable in its portfolio -- within a span of three months, Brock said.

Of its remaining 73 stores operating by the time of closure, only about one-in-three were profitable, Brock said. From his perspective, online retail was a big part of the problem.

“What the business has seen over the last five years, but very acutely over the last three years, is the quick rise in Canada of the Amazon Marketplace where there is quite a lot of sellers doing custom gift products. Etsy, even eBay has allowed lots of mom-and-pop businesses, garage-based businesses, independents, to get in and really step into the personalized custom gift space. And that’s created a lot of competition for businesses like us,” he said.

“Our own online business has grown a bit over the years, but not in a way that offsets what I think every business is losing to Amazon, month after month, year after year.”

Last year, more than 9,300 retail stores closed in the United States, according to Coresight Research. According to Retail Insider, more than 100 foreign retailers have entered the Canadian market in the last three years alone, adding to the competitive pressure.

Brock denied rumours that Things Engraved was moving to an online-only business model.

“At this stage, there’s no plan for that,” he said. “At this stage, we are winding down all operations. We are continuing to sell some inventory online and filling orders to customers, essentially closing that business out now. But we’re mainly focused on getting product returned to our suppliers.”

As for his next move, Brock said that’s yet to be determined.

“Essentially winding this business down on behalf of the ownership and re-entering the job market. Looking for my next career venture,” he said.

Anyone with items left at a Things Engraved store that they haven’t picked up is asked to email customerservice@thingsengraved.ca with a description of the item and the location that it was left at.