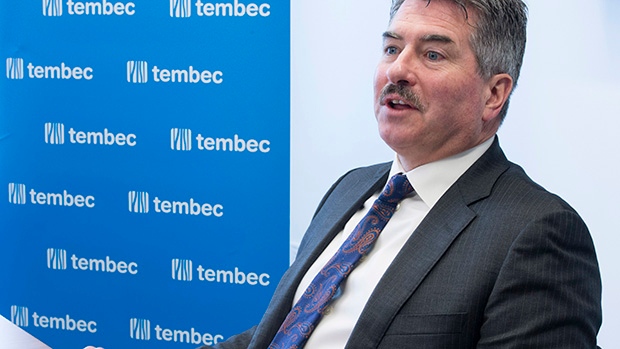 MONTREAL -- Eastern Canadian lumber producer Tembec says it's open to quotas on exports to the United States, in a break from the positions of some Canadian rivals and the Quebec government.

While chief executive James Lopez agrees that Canadian lumber should be exempt from restrictions because provincial systems are now market-based, he's advocating for a compromise to secure a new agreement.

Lopez said he's willing to accept limits on access in the belief that increasing home construction will ultimately result in higher lumber shipments and the supply of B.C. lumber is falling.

"We could live with a quota system," he said in an interview Thursday before Tembec's annual meeting.

"The only risk is if the U.S. is overly ambitious on the reduction in the Canadian market share to the point where we just cannot accept it, that it would be better to litigate than negotiate."

He said Canada's proposal for a quota in the range of 31 per cent -- which is far higher than the original U.S. proposal of 22 per cent -- will likely win the day.

If the number is too low, Lopez says Quebec-based Tembec (TSX:TMB) may not be able to sell all of its output or sell it profitably.

Resolute Forest Products (TSX:RFP) and the Quebec government want free trade with no quotas or duties.

The BC Lumber Trade Council says it prefers free trade but could accept a flexible system that adjusts to market conditions instead of a hard quota.

"Quotas distort the market so we're not really in favour of them but we're open to having a broad discussion," council president Susan Yurkovich said from Vancouver.

Lopez is bracing for the imposition of duties ranging between 25 and 30 per cent this spring until a new deal is negotiated. While they could cause some initial disruptions for Canadian producers, he said the low Canadian dollar and higher lumber prices will insulate some of the harm.

Tembec is less exposed to the U.S. than a decade ago after selling its two mills in B.C. and three in Quebec. It plans to spend $150 million over three years on upgrades, including $50 million to modernize its four sawmills in Ontario and two in Quebec.

He believes the U.S. Lumber Coalition wants a negotiated settlement instead of a protracted legal dispute.

Ultimately Lopez said this is a political issue that U.S. President Donald Trump may want to settle quickly to burnish his credentials as a deal maker.

Lopez doesn't believe softwood lumber will ultimately be part of Trump's quest to renegotiate NAFTA, adding that process could be lengthy to conclude.

However, Yurkovich said B.C. producers would be open to lumber being part of a broader trade agreement than just a bilateral lumber agreement.