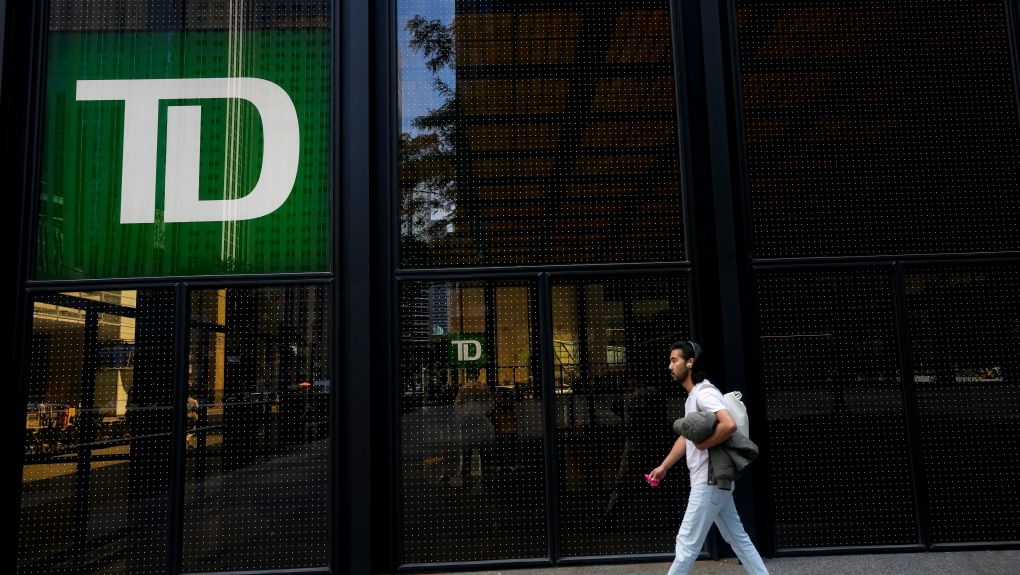 A man walks past the TD Bank in the Bay Street Financial District in Toronto on Friday, August 5, 2022. THE CANADIAN PRESS/Nathan Denette
TORONTO -

The virtual meeting, convened jointly by the Federal Reserve Board and the U.S.Office of the Comptroller of the Currency that are reviewing the proposed US$13.4 billion deal, heard from several groups concerned about TD's track record of serving Black and Latino clients.

Rachel Labush, a supervising attorney at Community Legal Services of Philadelphia, pointed to an investigative report from 2018 that found TD was, among large banks, the most likely to deny a loan application from a Black person or Latino.

"Even in a biased industry, Reveal noted that when you look at all the large banks in America, TD Bank is the most likely to deny a loan application from a Black person or Latino. Unfortunately, since that reporting TD Bank has not improved."

Labush said her organization's own research found that in the past three years of residential mortgage lending in Philadelphia, TD was, among its peers, tied for the lowest percentage of mortgages to Black and Hispanic people, and was less likely to approve a high-income Black applicant than a low-income white applicant.

"In our investigation, TD Bank stood out among banks for racial disparities in mortgage lending."

Like several other speakers, she urged regulators to make the merger's approval contingent on a strong community benefits agreement, with commitments including increased access to mortgage lending for Black and brown borrowers, more lending to small businesses, and increased branches in underserved neighbourhoods.

Other groups that have worked with and received support from TD or First Horizon voiced their support of the deal, and the track record of community benefits the banks have provided.

"We are in support of this merger because we hope that it can bring additional resources to our community, but also communities across the country that can benefit from a larger bank that has essentially more resources," said William Stoudt, executive director of Rebuilding Together New Orleans.

Leo Salom, chief executive of TD Bank in the U.S., highlighted the bank's recent initiatives including a special credit program designed to increase home ownership among communities of colour, a US$105 million equity fund the bank established last year to support minority owned small businesses and its work through TD's charitable foundation.

"We are proud of the role we play in our communities and we're excited about the opportunity to expand our impact through our combination with First Horizon."

He also touted changes to the bank's overdraft policies, which increased the threshold for charges and introduced a grace period, but the bank also faced criticism for still charging overdraft fees while some other major U.S. banks have done away with them, especially after TD faced a US$122 million settlement with U.S. regulators in 2021 stemming from illegal overdraft practices.

And while Salom said the bank plans to open more branches and touted that some branches are open seven days a week, Leo Williams of the Springfield Neighborhood Housing Services said he was concerned about the potential closure of a TD Bank branch in a predominantly Black and Latino community that is currently open only two days a week.

"A great deal of consideration needs to be given to potential negative impacts on Black and Latino low income individuals in these communities."

The public meeting was not a requirement of the takeover review but was convened at a time when regulators have called for increased scrutiny of merger activity in the banking sector. TD executives have said they don't expect any delays to the merger and that it should close in the first quarter of its 2023 fiscal year.

Bank of Montreal also faced a public meeting in mid-July on its proposed US$16.3 billion takeover of Bank of the West, where numerous community groups also urged the deal be blocked until a strong community benefits agreement is reached.

BMO also faced criticism for the proportionately low number of mortgages granted to Black and Latino borrowers, while numerous community groups that have received funding from BMO voiced their support of the deal.