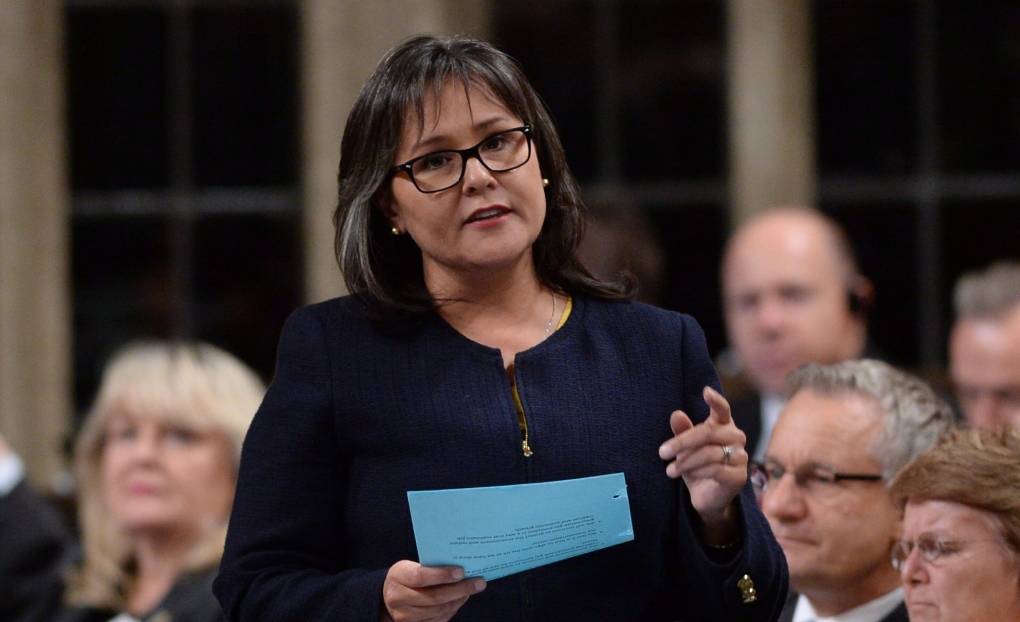 Environment Minister Leona Aglukkaq responds to a question during question period in the House of Commons on Parliament Hill in Ottawa on Wednesday, Oct. 8, 2014. (The Canadian Press / Sean Kilpatrick)

VANCOUVER -- The federal environment minister acted improperly in rejecting a $1.5-billion gold and copper mine proposed in British Columbia and the company deserves compensation for her alleged wrongdoing, says a lawyer for Taseko Mines (TSX:TKO).

A week before a judicial review was to get underway into the rejection of the New Prosperity mine, the company asked a Federal Court to convert its action into a full-fledged lawsuit.

"We did not get a fair hearing on this matter," Hunter told Judge Roger Lafreniere on Wednesday. "We say there should be monetary consequences for this. There should be damages because these people have acted improperly."

Taseko currently has two judicial review applications before the court: one related to the report by the Canadian Environmental Assessment Agency panel recommending against the mine, and another related to the federal minister's decision to reject the mine.

The company wants both applications rolled into one lawsuit because damages are not awarded in a judicial review.

"Taseko has poured $130 million into this project and has a right to a fair process," Hunter said.

The court heard that after a Canadian Environmental Assessment Agency review was complete Aglukkaq met with representatives of the Tsilhqot'in Nation, which opposed the mine.

At the time, the Tsilhqot'in had a land title case before the Supreme Court of Canada. The court has since issued a landmark decision recognizing aboriginal land title for the first time.

"We've got enough on the record here to cause a legitimate suspicion -- a suspicion that may not be one that can really be fleshed out in judicial review," Hunter told the judge.

The New Prosperity site is the tenth-largest undeveloped gold-copper deposit in the world. The company estimated the project would create 750 construction jobs and 500 permanent jobs in an area where the forest industry has been devastated by the pine beetle epidemic.

The provincial government has approved the project, but Ottawa first rejected the mine in 2010 because the plan involved draining a lake of significance to the Tsilhqot'in for use as a tailings pond.

The company submitted a revised plan to preserve the lake, but the environmental assessment found it would still cause significant adverse affects.

The mine site is outside the land recognized by the high court in the Tsilhqot'in land title case, Hunter said.

"It is not important at all for this case," he argued.

In documents submitted to the court, lawyers for the federal government said none of the minister's actions were unlawful, so there is no cause of action by Taseko.

Tim Timberg, lawyer for the federal environment minister, told the judge that the claim for damages is "dubious" and to convert the court process at this point would cause undue delay.

"The real remedy Taseko seeks remains the same -- to quash these administrative decisions and allow them to proceed with the construction of the proposed mine," Timberg said.

Allowing Taseko to make a claim for damages would open the floodgates, he suggested.

"Those damages would be sought by every single application for judicial review brought before this court because all applicants would want damages for the delay," Timberg said.