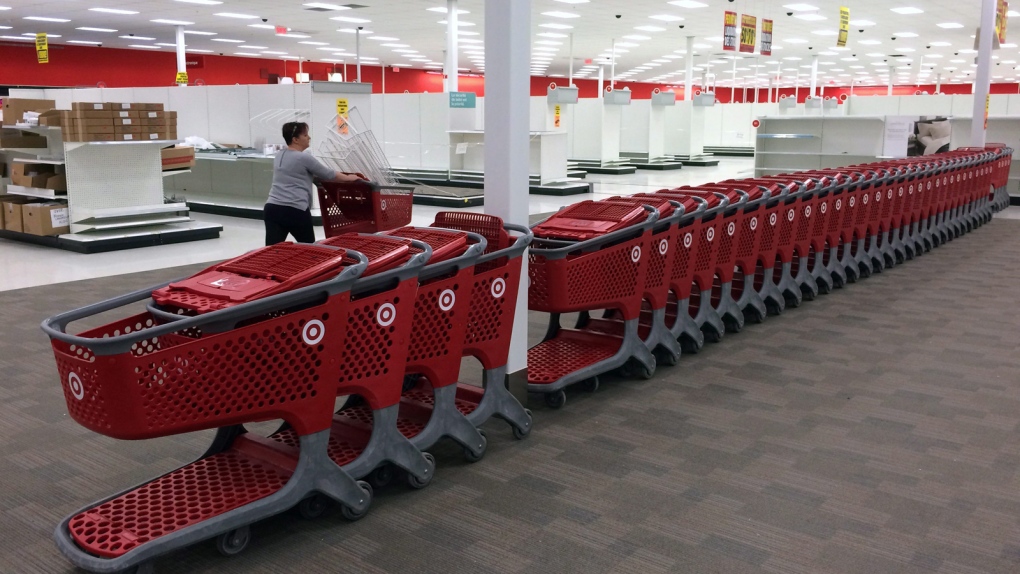 A shopper browses liquidation items amongst empty shelves at a Target store in Boisbriand, Que., on Saturday, March 28, 2015. (Ryan Remiorz / THE CANADIAN PRESS)

TORONTO -- Tens of thousands of Target Canada shopping carts and nearly a million plastic bags are part of a long list of items being sold to Target Corp. for US$2.22 million.

The decision lifts some of the weight off Target Canada, which is in the midst of a massive liquidation of its 133 stores across the country, as it winds up operations.

The sale Monday covers things that couldn't be sold at the cash register.

On the list are Target's signs which hung both inside stores and outside the buildings and a sculpture of the Target bull's eye logo from its headquarters in Mississauga, Ont.

Court documents say that unlike other items owned by the stores, which include electric scooters and shopping cart corrals, the Target-branded items could not be sold in the liquidation process because they're all stamped with the company's name, which would be difficult to remove "without destroying or substantially decreasing their value."

Target Canada believes it will save an extra $1.9 million by shifting the responsibility for removing and disposing of the branded items over to the parent company.

The decision is a small step in the wind up of Target Canada's operations across the country. Lawyers for Target and various other interests, including landlords and suppliers, have been ironing out the specifics of the retailer's departure from Canada.

Target Corp. announced in January that it was making plans to leave the country, and close its 133 Canadian stores, after deciding it would take years to turn a profit.

A liquidation began last month and so far Target Canada has either closed or announced the final day of operations for 118 of its stores.

Six Target locations will shut down Monday, while 23 are slated for closure on April 1, and 32 more on April 2.

Target spokeswoman Molly Snyder confirmed by email on Monday that Target and its liquidator have picked another 18 stores that will close on April 4, and 24 more on April 8.