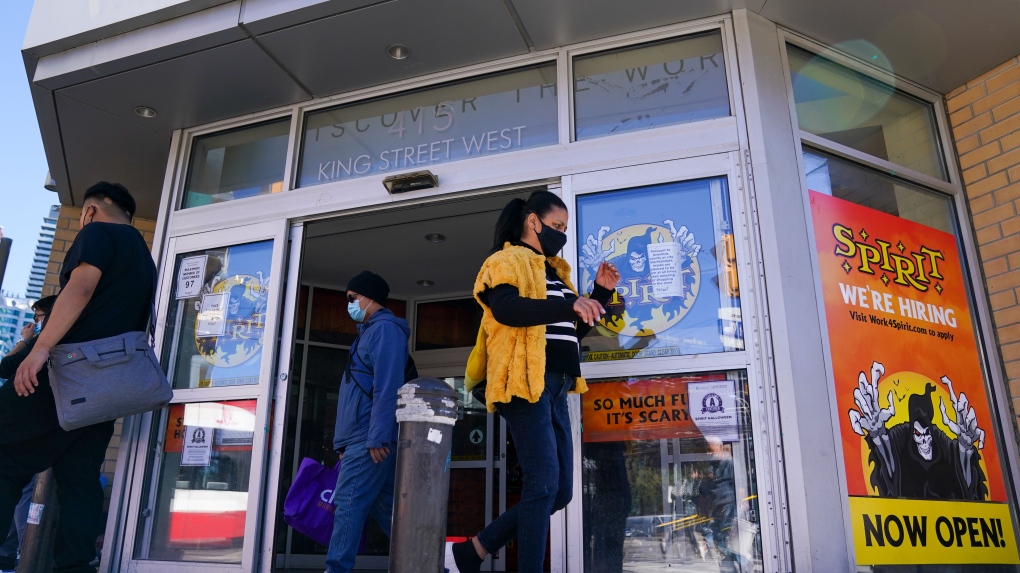 Customers walk out of the Spirit of Halloween store in Toronto on Tuesday, October 19, 2021. The global supply chain is continuing to be affected by COVID-19. THE CANADIAN PRESS/Evan Buhler

In a typical year Geoff Waszek makes his Halloween orders in January, and the shipments arrive at his Toronto costume shop in September.

But being wary of another pandemic-related lockdown in autumn, the owner of Candy's Costume Shop opted to order less far in advance this year.

“We were very cautious with our ordering because we just didn't know how much of a Halloween it would be,” said Waszek.

Now that COVID-19 cases have stabilized enough in Canada for people to celebrate the holiday, Waszek was left scrambling to stock his shelves in time.

“We had to do a lot of scrounging this year, going through companies and finding what's available,” he said.

“Some companies would have red capes, but would be out of black. Just imagine doing that for every product.”

Waszek is one of many Halloween store owners who say supply chain issues, shuttered suppliers and uncertainty about the holiday have hampered their recovery from a dismal 2020.

In the end, Candy's Costume Shop was able to stock about 90 per cent of its shelves, but there were certain items missing. Licensed products like superhero and movie costumes were nearly impossible to get a hold of, so his shop has more generic items like capes and masks this year.

U.S.-based HalloweenCostumes.com, which ships directly to Canadian consumers, said many retailers are struggling as they see a roughly 50 per cent increase in year-over-year demand compared with last year, when many didn't celebrate Halloween.

Spokeswoman Ashley Theis said much of the stock HalloweenCostumes.com ordered won't even arrive until after the holiday.

“This will just have to be 2022 Halloween inventory,” she said, saying rail, pallet and container shortages, as well as closing ports led to massive backlogs.

“Due to the major increase in demand and the low stocks of quantity everyone has been able to get, few retailers are able to keep up.”

The picture isn't as scary in all parts of the country, however. In Calgary, where COVID-19 cases didn't spike until November 2020, Don's Costume and Make Up Shop said they weren't heavily impacted by the pandemic.

This year, they also had to put in much more work to find stock and pay more for rush shipping, but were largely able to stock as they normally would.

Back in Toronto, where Waszek's store is ready for the remaining weeks of Halloween shopping, he said people seem very excited to enjoy Halloween this year.

“It seems to be the first sort of event that everybody as a community can enjoy again.”