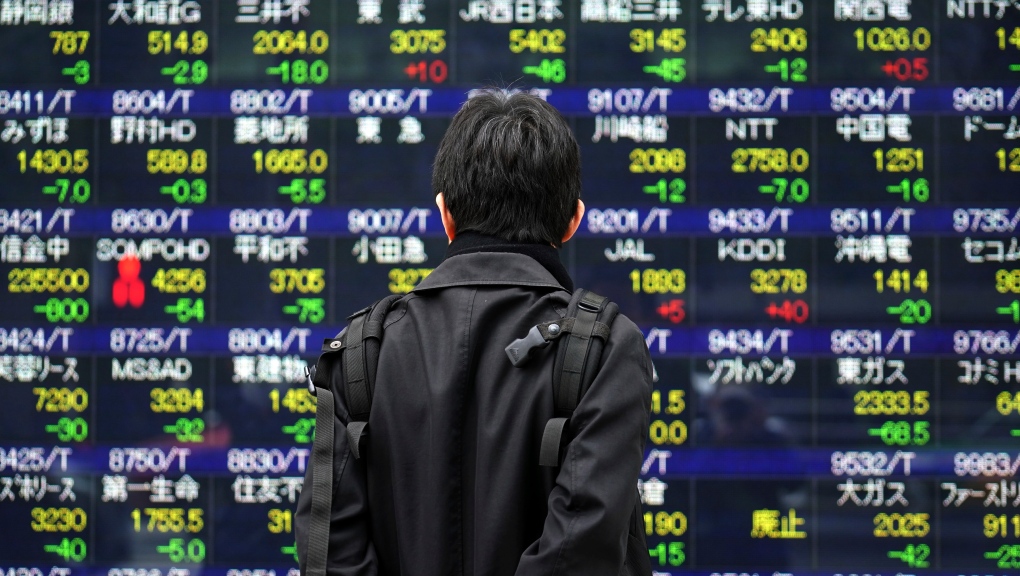 A man looks at an electronic stock board at a securities firm in Tokyo Friday, Jan. 15, 2021. (AP Photo/Eugene Hoshiko)
BANGKOK -

Stocks wobbled between gains and losses on Wall Street Friday as major indexes head for another weekly loss.

The tech-heavy Nasdaq fell 1.4% and has been hit particularly hard by expectations for higher interest rates. As investors prepare for higher interest rates, shares in pricey tech companies and other expensive growth stocks look relatively less attractive. The index is on track for its fourth straight weekly loss and losses in recent months had by Wednesday left it in what Wall Street considers a market correction, or 10% below its peak.

Stocks have been falling all week amid concerns about rising inflation and an upcoming increase in interest rates. Technology stocks have been directing, and often abruptly redirecting, momentum in the market.

"The market is working through digestion of how much monetary policy change will occur over the course of 2022," said Bill Northey, senior investment director at U.S. Bank Wealth Management.

Technology and communications stocks were among the biggest weights on the market.

Streaming video service Netflix plunged 21.3% after it delivered another quarter of disappointing subscriber growth. Disney, which has also been trying to grow its subscriber base for its streaming service, fell 6%.

A mix of retailers, travel-related companies and other companies that rely on direct consumer spending also fell.

Bond yields fell significantly. The yield on the 10-year Treasury fell to 1.75% from 1.83% late Thursday. The drop weighed on bank stocks, which rely on higher yields to charge more lucrative interest on loans.

Household good makers and utilities, which are typically considered less-risky investments, made gains.

Inflation fears and concerns about the impact of higher interest rates have prompted a cautious shift in the broader market after a solid year of gains in 2021.

Supply chain problems and higher raw materials costs have prompted companies in a wide range of industries to raise prices on finished goods. Many of those companies have warned investors that their profit margins and operations continue feeling the pinch in 2022.

Rising costs have raised concerns that consumers will start to ease spending because of the persistent pressure on their wallets. The latest retail sales data for December was surprisingly disappointing and revealed a decline in sales.

The Federal Reserve is now expected to raise interest rates earlier and more often than it had previously signaled in order to fight rising inflation that threatens to derail a further economic recovery. The central bank could begin raising rates as early as March.

Investors have also been busy reviewing the latest round of corporate earnings, which could give them a better sense of how companies are dealing with persistent supply chain problems and higher costs.

Peloton rose 14.6% after the maker of exercise bikes and treadmills said fiscal second-quarter revenue would meet previous estimates. The stock tanked a day earlier after CNBC reported Peloton was temporarily halting production of exercise equipment to stem a decline in sales.