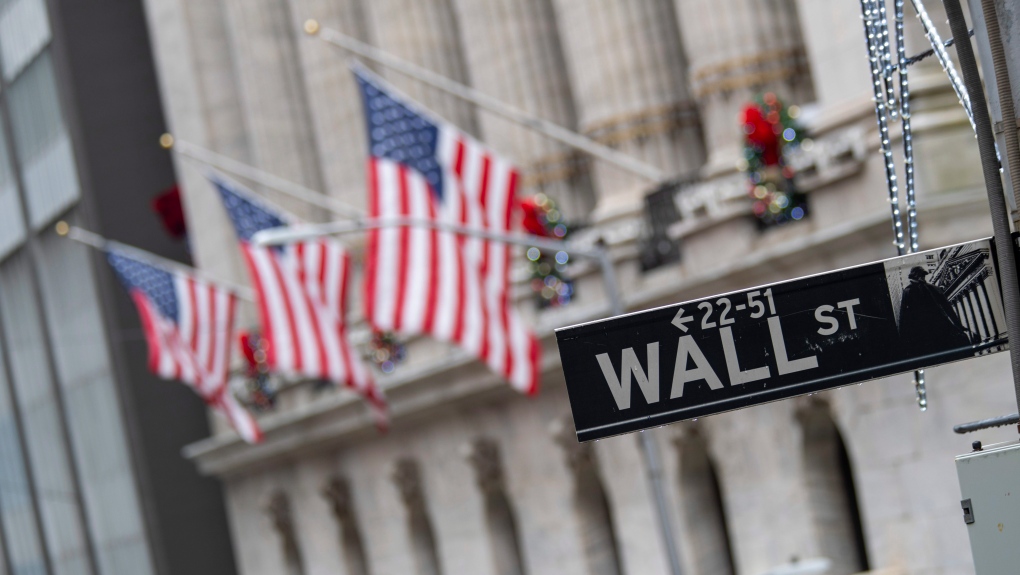 In this Jan. 3, 2020 file photo, the Wall St. street sign is framed by American flags flying outside the New York Stock Exchange in New York. Stocks dropped 10% in early trading Monday, March 16, on Wall Street as huge swaths of the economy come closer to shutting down, from airlines to restaurants. (AP Photo/Mary Altaffer, File)
TORONTO -

Markets on both sides of the border were under pressure as data out of the U.S., including on service sector activity that came in higher than expected, indicated continued economic strength.

"The narrative of, 'Good economic news is bad news for stocks' is in full display," said Angelo Kourkafas, investment strategist at Edward Jones.

Data out of the Institute for Supply Management on the service sector showed surprise growth for November, adding to picture of a still hot economy created by Friday's job numbers out of the U.S., he said.

"Resilient activity means that there's going to be more of an inflationary impulse in the services sector, and really feeding into the narrative of higher interest rates for longer."

He said that the latest data hasn't pushed up expectations of how high rates will go but more on the duration, creating more of a risk-off sentiment as Treasury yields also rose on the data.

Canada's main index saw pressure both on the growth-oriented information technology side from the U.S. data, as well as on energy and metal stocks as commodities fell.

The energy index was down 2.9 per cent, including Canadian Natural Resources Ltd. down 3.7 per cent and Crescent Point Energy Corp. down four per cent.

Oil rose early in the day in part over hopes China's relaxed pandemic restrictions could increase demand, but was overshadowed by a decision over the weekend by OPEC-plus countries not to adjust production, said Kourkafas.

"The fact that OPEC-Plus didn't choose to to make any changes is what really is driving prices lower today."

A risk-off mentality also put pressure on the S&P/TSX base metal index that was down 2.1 per cent, as February gold contract was down US$28.30 at US$1,781.30 an ounce and the March copper contract was down six cents at US$3.80 a pound.

The Canadian dollar traded for 73.90 cents US compared with 74.25 cents US on Friday.

Central Banks in Canada and the U.S. are both poised to announce their latest rate decision, with the Bank of Canada on Dec. 7 and the U.S. Federal Reserve on Dec. 14.

Kourkafas said that there has been a pretty meaningful rally since the mid-October lows even though the investment backdrop is no less complicated, so some pullback is not surprising. He said however that the worst-case outcomes are narrowing as there is some indication of progress on inflation, but that there's still a ways to go.

"It's not going to be an overnight process. It's going to be gradual one and investors need some patience."

This report by The Canadian Press was first published Dec. 5, 2022