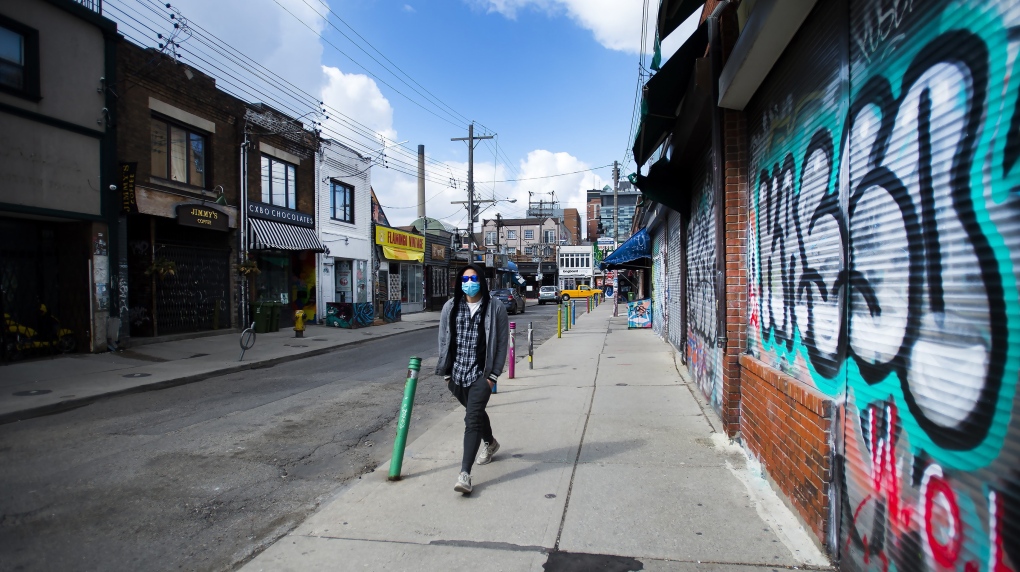 A lone person walks past closed businesses in Kensington Market in Toronto on Wednesday, April 15, 2020. As the federal government begins accepting applications for the Canada Emergency Wage Subsidy to soften the economic blow of the COVID-19 outbreak, many business owners wonder if their own wages are covered. THE CANADIAN PRESS/Nathan Denette

OTTAWA -- Statistics Canada recorded 56,296 business closures in June, an improvement from May but still 44 per cent more than in February before the COVID-19 pandemic struck in force in Canada.

The number of business closures in June was down 5.6 per cent nationally compared with May, with Quebec being the only province or territory showing an increase, Statcan said Monday.

There were also 52,723 business openings nationally in June, 33 per cent more than Statistics Canada recorded in May,

But only about one-fifth of all businesses that closed in March or April had reopened by June and 14.1 per cent of businesses that were active in February remain closed as of June, it said..

"In all provinces and territories, with the exception of Prince Edward Island and the Yukon, the number of business closures remains higher than the pre-COVID level of February," Statcan said.

"For instance, in Ontario, the level of business closures in June was 47 per cent greater than the February level."

There were nearly 800,000 active businesses in the business sector in February, it said.

The novel coronavirus was first identified in China in late 2019 had been recognized as a significant threat to human health by February but the World Health Organization didn't officially declared COVID-19 as a global pandemic until March 11.

Statistics Canada said its monthly business closures report, begun after the pandemic began, remains experimental and cautions against putting too much reliance on the data.

However, a data chart attached to the report says the number of active businesses in June was 695,194, down from 797,501 in February.

A separate table shows 19.2 per cent of businesses that closed since February had reopened as of June, but some industries were slower to recover than others.

At the low end of the range of post-COVID reopenings, were wholesale trade (13.8 per cent reopened) and retail trade (14.7 per cent).

At the high end were utilities (32.7 per cent reopened) and forestry, fishing and hunting (29.5 per cent).