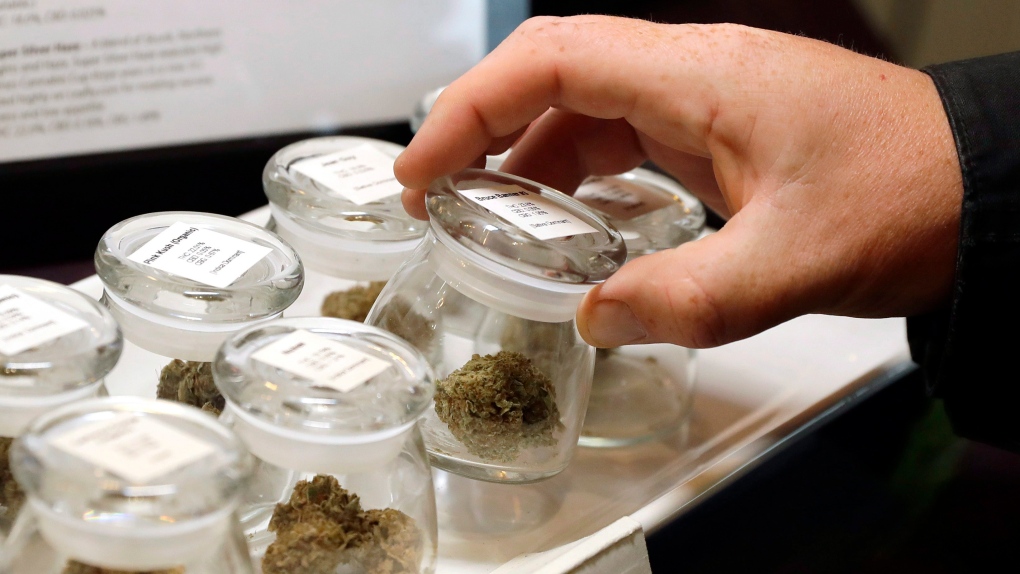 In this Sept. 24, 2018 photo, different strains of marijuana are displayed for sale at the Warmland Centre, a medical marijuana dispensary in Mill Bay, B.C. (AP Photo/Ted S. Warren)

TORONTO -- As tens of thousand of Ontarians purchased cannabis through a government website on Wednesday, some users in Toronto preferred getting their pot from unlicensed dispensaries that remained open despite the threat of criminal prosecution.

It was business as usual at 1Tonamara, an illegal pot shop located in the city's downtown, hours after recreational cannabis became legal nationwide. The Spadina Avenue shop, along with the Cloud 6ix dispensary up the street, had customers entering every few minutes.

"Today business has been good, you know, I guess with a lot of other places shut down it helps," said 1Tonamara employee Mike Vander Marel.

Many of the city's dispensaries have, however, shut down in the leadup to legalization in response to a promise by the provincial government that illegal pot shop owners who obeyed the law, would be allowed to apply for retail licences.

"I think it's a dumb thing for them to legalize something and then have it so inaccessible...it would be like after prohibition, if they made booze legal but there was no legal booze."

The provincial legislature was expected to pass a bill Wednesday afternoon that will include regulations on where recreational pot can be used. It will also cities to order the interim closure of illegal pot dispensaries through a court order.

Meanwhile, the city's police chief said his officers would not be cracking down on illegal shops Wednesday because of resources issues.

"There will not be 100,000 police officers landing in the city of Toronto shutting down every element of a dispensary, but we will be shutting them down," Chief Mark Saunders told reporters on Tuesday.

Vancouver and Victoria have licensed some dispensaries, but others operate without a licence. Some dispensaries remained open, while others shut their doors.

Don Briere, owner and operator of Weeds Glass and Gifts in British Columbia, said the company has closed most of its retail outlets in accordance with the law.

"We've shut down 10 locations and we've had to lay off about 85 people and probably more, but we're doing this in order to become legal," Briere said.

At the same time, four of its Vancouver locations and one shop with a temporary licence in Sechelt remained open. The company is waiting for a court decision on the city of Vancouver's application for an injunction to shut down dozens of retailers operating without a business licence, including the four Weeds locations, he said.

In the meantime, Briere said the company is paying federal, provincial and corporate taxes on its sales, and paying its staff a living wage with extended medical and dental coverage. It's in the process of applying to the province for a retail licence, he said.

"We're doing what our lawyers are calling, 'good business practices.' "

Briere also said he has been paying attention to B.C. government's price points, which begin at $7 per gram. Weeds' cheapest gram is $4.

Vancouver's police chief said earlier this week that enforcement against the dispensaries would not be a priority on the first day of legalization.

Marel said he wasn't concerned about enforcement yet in Toronto, but isn't sure what comes next.

"At least today I'm not too worried. I don't know how we will be moving forward at all."

The online-only legal option in Ontario didn't sit well with some dispensary customers.

"I prefer the reliable logistics of a brick-and-mortar outlet," said Alex, 30, who declined to provide his last name.

He said his fear of buying online could fade now that it's legal, something he hopes to happen with perceptions of pot in general.

A woman exiting one of the Toronto dispensaries who declined to provide her name said she was still buying at storefronts because the laws remain restrictive on some products.

"Edibles won't be available for another year at least, and rumour is they're going to start cracking down on dispensaries because they still have the edibles, so I'm stocking up on edibles before I can't get them anymore."

She said that overall the shift is positive.

"It's a great step. I'd much rather be buying this legally and not feeling sketchy about it."

Provinces raked in revenue on day one of cannabis sales

Cannabis beer? Pot-brewed beverage could be the future of consumables

First legal purchase of cannabis made in Newfoundland and Labrador

Winnipeg, Ontario police hand out tickets for cannabis in vehicles

What does cannabis cost across Canada?