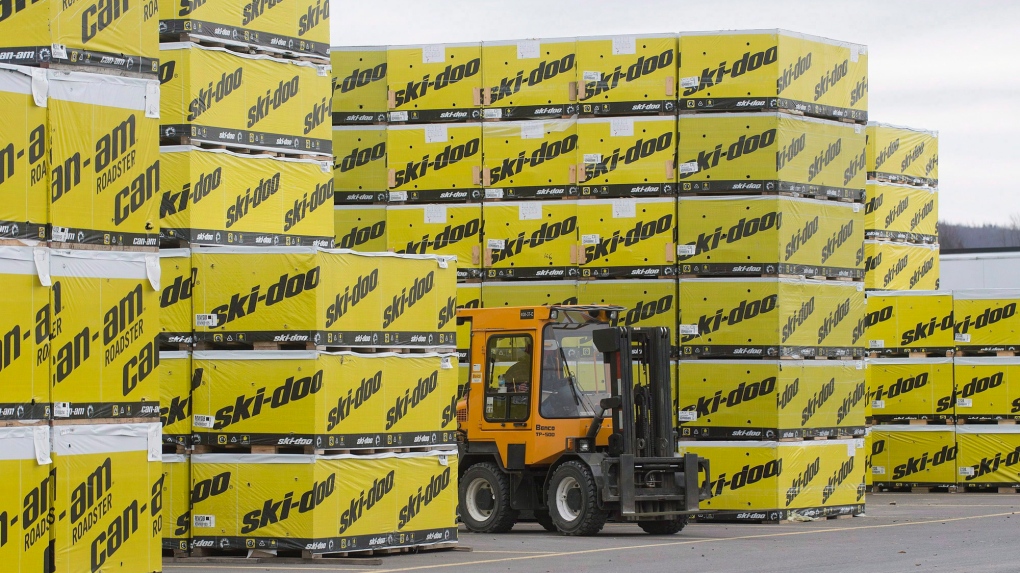 BRP products are shown in a storage yard in Valcourt, Que., on November 9, 2012. (THE CANADIAN PRESS/Graham Hughes)

MONTREAL -- The head of recreational products maker BRP Inc. said it may not comply with Monday's trade deal between the United States and Mexico, which would up the threshold of auto content to be made in those two countries.

BRP churns out more than $260 million worth of all-terrain vehicles and ATV parts in Mexico that are shipped to the U.S. annually, said president and chief executive Jose Boisjoli.

"In our case, we would not comply," he told The Canadian Press on Thursday, buoyed by record-high share prices in the wake of BRP's second-quarter earnings report.

Boisjoli qualified that "if worse came to worst," he would also consider shifting some of the company's ATV component suppliers from Asia to North America to meet the higher threshold.

The side deal between Canada's two NAFTA partners would require up to 75 per cent of auto content to be made in the U.S. and Mexico, up from 62.5 per cent. Between 40 and 45 per cent would have to be produced by workers earning at least US$16 an hour.

Breaking the rules would incur a penalty of two per cent of sales on ATVs -- about $5 million -- the only BRP product to fall under the auto classification.

The maker of Ski-Doo snowmobiles and Sea-Doo personal watercraft, generated revenue of $4.5 billion last year with a net income of $274 million, making the penalty a drop in the ocean.

BRP shares hit an all-time high Thursday after the Quebec-based company raised its financial guidance for a second consecutive quarter as revenues surged in the second quarter, driven by higher sales of off-road vehicles and watercraft.

Boisjoli attributed some of the good fortune to a low unemployment rate and a stable housing market in the U.S. and Canada.

"Many of our customers, because they have a job, they have a roof, they have more disposable income, they're buying our product," he said.

"We are gaining market share in every product line we are in. And that's why we feel quite good about the balance of the year and we're comfortable increasing our guidance."

BRP said it now expects its normalized earnings per diluted share for the year to increase 30 to 35 per cent compared with the previous year, up from an earlier prediction for growth of 24 to 30 per cent.

Revenue is now expected to grow 12 to 16 per cent compared with earlier guidance for growth of six to 10 per cent, beating analyst expectations.

The guidance bump marks the second straight quarter that BRP has raised its revenue forecast.

Sales of Sea-Doos and side-by-sides -- four-wheel-drive off-road vehicles -- propelled revenues to a new second-quarter record at the 76-year-old company.

The revised guidance came as BRP's net earnings fell to $41 million or 41 cents per share for the quarter ended July 31. That compares with $104 million or 93 cents per share a year ago when the company benefited from a one-time foreign exchange gain on its long-term debt.

"We believe the company's performance speaks to management's ability to introduce compelling products through innovation -- a key lever for market share gains," he wrote in a report.

Some of those gains are coming from BRP's recent acquisitions AlumaCraft Boat Co. and Manitou Pontoon Boats.

Aluminum fishing boats and pontoons -- uncharted waters for BRP -- comprise more than half of the U.S. boat market, said Boisjoli.