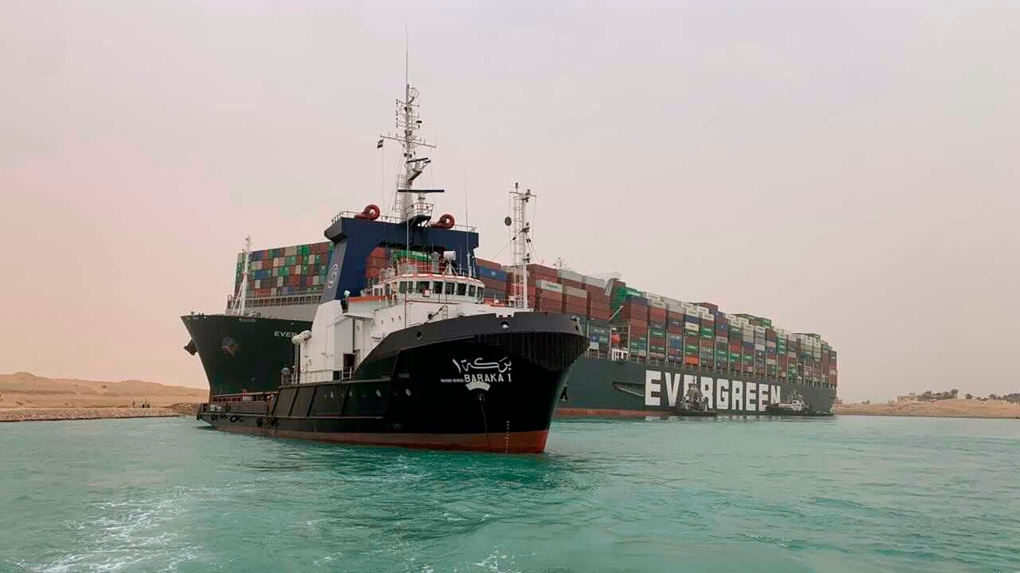 In this photo released by the Suez Canal Authority, a boat navigates in front of a massive cargo ship, named the Ever Given, rear, which is operated by the Taiwan-based firm Evergreen, as it sits grounded Wednesday, March 24, 2021, after it turned sideways in Egypt's Suez Canal, blocking traffic in a crucial East-West waterway for global shipping. (Suez Canal Authority via AP)

TOKYO -- A ship that blocked the Suez Canal for almost a week in March has not been given clearance to leave the waterway as discussions continue over a compensation claim made to the vessel's owner Shoei Kisen, an official from the Japanese company said on Tuesday.

The Ever Given has been in a lake separating two sections of the canal since it was dislodged on March 29, as the Suez Canal Authority (SCA) conducts investigations.

A source with the Suez Canal Authority, who declined to be named, told Reuters a court order had been issued for the ship to be held, adding that negotiations were still taking place.

Results of the SCA's investigation were expected to be announced by the end of the week, two canal sources added.

SCA Chairman Osama Rabie said on Egyptian TV last week that theEver Given would not leave until the investigation was finished and compensation paid. He also said the canal had borne "great moral damage" as well as shipping fee losses and salvage operation costs. He has also said he hoped to settle matters amicably.

International supply chains were thrown into disarray when the 400 meter (430 yard)Ever Given ran aground in the canal on March 23.

Specialist rescue teams took six days to free the vessel, delaying the passage of more than 400 ships and causing others to divert around Africa.

Industry sources told Reuters last week that reinsurers were set to foot most of the bill for the ship's grounding, with payouts expected to run into hundreds of millions of dollars.

(Reporting by Yuka Obayashi in Tokyo, Yusry Mohamed in Ismailia and Jonathan Saul in London. Editing by Jane Merriman)