Shell gets approval for drilling off Nova Scotia shore 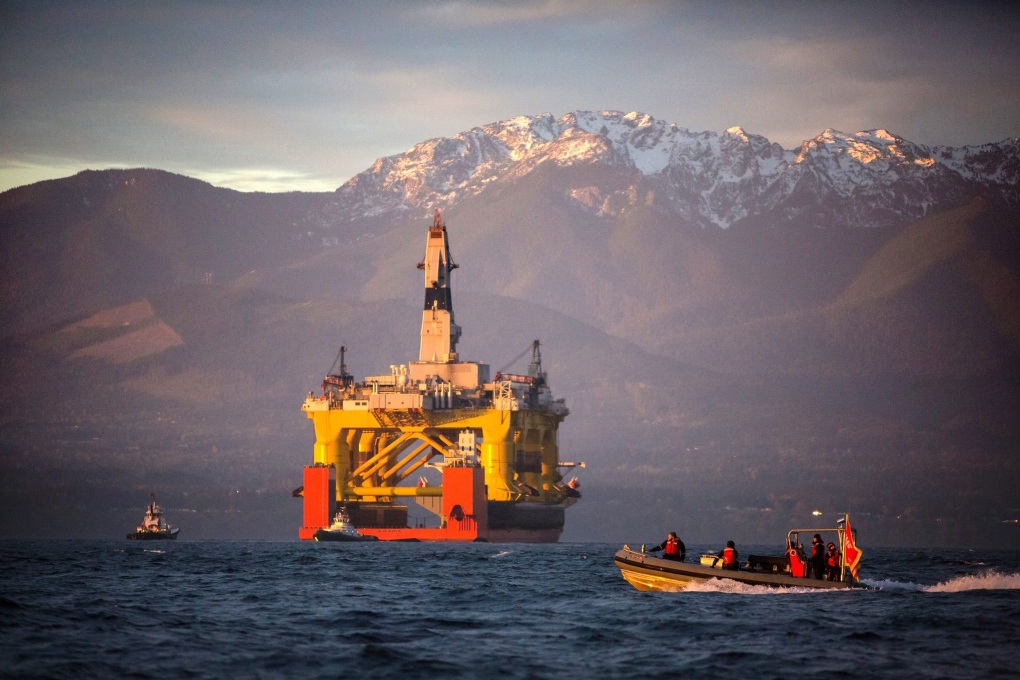 In this April 17, 2015 file photo, a small boat crosses in front of the Transocean Polar Pioneer, a semi-submersible drilling unit that Royal Dutch Shell leases from Transocean Ltd., in Port Angeles, Wash. (Daniella Beccaria/seattlepi.com via AP)

HALIFAX -- A federal regulator will allow Shell Canada Ltd. to begin exploration drilling off Nova Scotia after it reduced the number of days it would take the company to bring in capping technology in the event of a subsea well blowout.

The company says it would have a capping stack on site within 12 to 13 days after previously saying it would take up to 21 days.

The Canada-Nova Scotia Offshore Petroleum Board said Tuesday it is satisfied that Shell is taking all reasonable precautions to protect safety and the environment.

Environmentalists have questioned the amount of time it would take the multinational company to bring a vessel and a capping system to the Shelburne Basin offshore site, about 250 kilometres off the southwestern coast of Nova Scotia.

They say the most recent U.S. ruling in Alaska requires that a capping stack be on hand for a blowout within 24 hours.

The offshore petroleum board says Shell initially plans to drill two exploratory wells, but before it drills the first well it must receive approval from the board, which it anticipates will be issued within a few days.

Approval for the second well will also be required.

The board says in addition to bringing in a capping stack within 12 to 13 days, Shell has agreed to also deploy a second capping stack at the same time as a contingency.

The board says it has imposed more stringent conditions on Shell over the past five years including improvements to the blowout preventer.

"With the stringent requirements now in place for blowout preventers, independent well examiners, real time monitoring and CNSOPB's deep water drilling oversight plan ... we are confident that all reasonable precautions to protect safety and the environment have been taken," board CEO Stuart Pinks said in a statement.

But Mark Butler, of the Halifax-based Ecology Action Centre, thinks the board should have been even more stringent in reducing the time required to get capping technology in place.

He said there's no guarantee the equipment will make it in the time required in the unlikely event of a blowout, given the unpredictability of weather in the Atlantic.

"It's still two weeks of oil flowing into the ocean in the event of a blowout," Butler said. "We should have capping stack technology here in Atlantic Canada, so it's 24 or 48 hours to get it out to the shelf."

"Shell has more than 30 years of experience operating safely in the deep water around the world," she said in a news release.

The Canadian Environmental Assessment Agency has said a blowout in the wells that are planned is unlikely. It also said the Alaska plan to have a vessel and capping system on call was based on the harsh, icy environment in the area and the long distances a vessel would have to travel to get there.

An overview of the project published on the petroleum board's website says Shell Canada plans to begin drilling in the fourth quarter of this year and the first phase is expected to take 11 to 12 months.

The Nova Scotia premier's office said a drilling vessel owned by Scotland-based Stena Drilling arrived in the province's waters on Tuesday to begin work on the $1 billion exploration program.

"This is an important day in Nova Scotia's economic history," Premier Stephen McNeil said in a statement. "Offshore development is one of our most exciting opportunities for growth and I am thrilled Shell is committed to further exploring our offshore potential by drilling its first deep-water well."