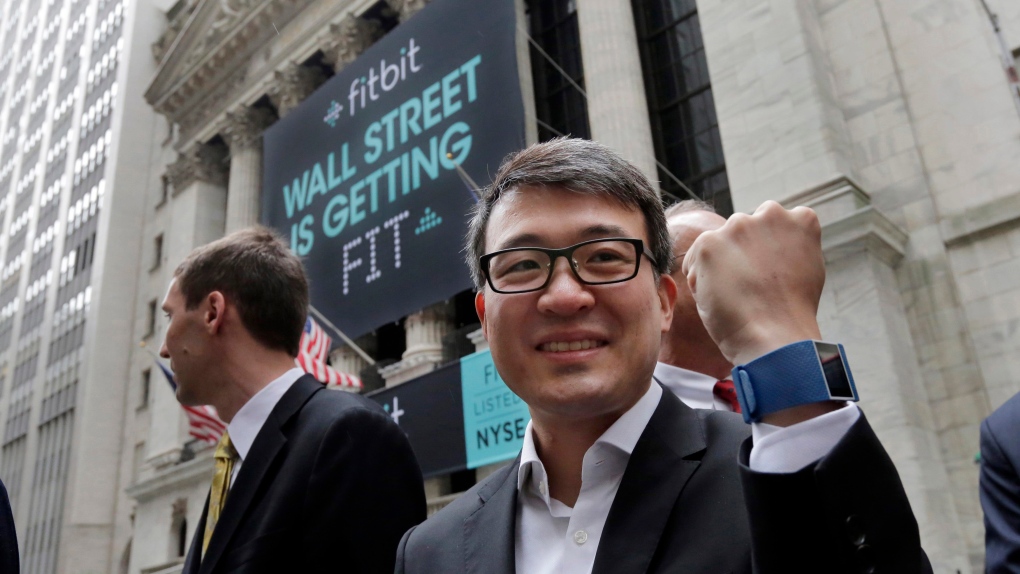 Fitbit CEO James Park shows off one of his devices as he poses for photos outside the New York Stock Exchange, before his company's IPO, on Thursday, June 18, 2015. (Richard Drew/AP Photo)

NEW YORK -- It was a very merry Christmas for fitness-tracking device maker Fitbit.

The company's app was the most downloaded on Apple's app store Christmas Day, a sign that many people couldn't wait to set up their Fitbit trackers after unwrapping them. It also suggests that Fitbit trackers were a hot seller during the holidays, despite increasing competition from Apple's smartwatch and other wearable devices. Investors were pleased, sending shares of the San Francisco company higher Monday.

The Fitbit app topped Apple's app store in the U.S. on Christmas Day and the day after, according App Annie, which tracks app downloads and rankings. That's far better than last year when the Fitbit app ranked at No. 18 on Christmas Day and No. 15 the day after, according to research from Raymond James & Associates. In a note to clients, Raymond James analyst Tavis McCourt called the numbers "impressive."

While app downloads don't necessarily mean a tracker was sold, McCourt said it's a "good measure of relative sales success."

Retailers confirmed Monday that Fitbit trackers were in high demand during the holiday shopping season.

Macy's Inc. said the Fitbit's products sold "very well" at the department store. Discount retailer Target Corp. said the trackers were one of its top-selling electronics during the holiday season. And Amazon.com Inc. said the Fitbit Charge was one of its most popular items for customers that used its same-day delivery service in Chicago, Dallas, New York and other major cities.

App downloads could also lead to future sales. Users who track their health information on the app are more likely to buy another Fitbit device when they want to upgrade, said Ross Rubin, the senior director of industry analysis at App Annie.

Amanda Hetherington opened a Fitbit Flex on Christmas Eve, a gift from her son, and plans to buy more.

Hetherington, who says she is working on getting back into shape, downloaded the app on Christmas Day. Besides steps, she also plans to track what she eats and how much water she drinks with the app.

She's already making changes: This weekend she parked further away from a restaurant to get in more steps.

"I love it so much," said Hetherington, who lives near Columbia, South Carolina, "I'll probably get one for my husband for Valentine's Day."

Fitbit sells several different devices that track user's steps, calories or sleep patterns. They cost as little as $60 for a tracker that clips to clothing to about $250 for a watch. The company has already sold more than 13 million devices so far this year before the holiday shopping season, surpassing the 10.9 million total devices it sold last year.

But like a new gym membership, there is still the question of how long people will remain dedicated to their fitness trackers once the novelty wears off. Research firm Endeavour Partners estimated earlier this year that about a third of trackers get abandoned after six months.