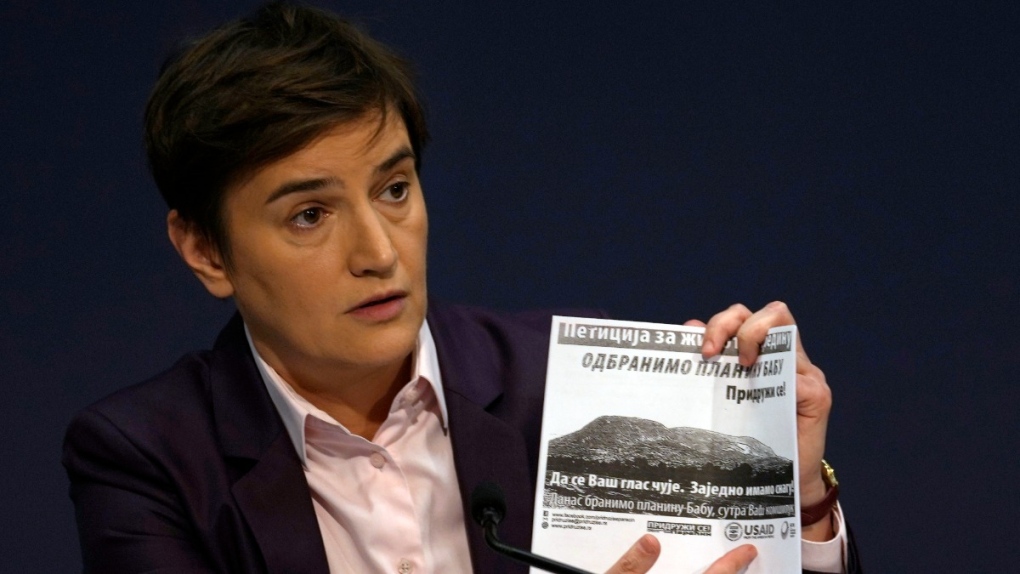 Trying to defuse large protests by environmentalists, Serbia's populist government said Thursday that it was cancelling all licenses for mining giant Rio Tinto to open a lithium mine in the Balkan country.

"We have fulfilled all the requests of the environmental protests and put an end to Rio Tinto in the Republic of Serbia," Serbian Prime Minister Ana Brnabic said in a televised address. "Everything is finished. It's over."

Used in batteries for electric cars, lithium is considered one of the most sought-after metals of the future as the world shifts to more renewable energy sources.

For several weekends, thousands of demonstrators in Belgrade and other Serbian towns have blocked main roads and bridges to protest the planned mine in western Serbia, despite an intimidation campaign by authorities. Opponents say the project would cause severe environmental damage.

The protests posed the biggest challenge yet to the increasingly autocratic rule of President Aleksandar Vucic, who has denounced the road blockades as illegal and claimed they are being financed from abroad to destabilize the country.

Brnabic said all the licenses granted to Rio Tinto, which has been exploring mining possibilities in the country for about two decades, were provided by the previous, pro-Western government.

But Serbia's independent media allege that the main contracts with Rio Tinto were signed with the current right-wing leadership. Critics argued that by sidelining Rio Tinto, the government is doing damage control ahead of April general elections.

Earlier Thursday, Rio Tinto in a statement expressed "concern" over reports that the project would be scrapped.

The company said any decision should be accompanied by "discussion and dialogue based on facts." It added that it is dedicated to developing the project in accordance with Serbian and international regulations.

"We are not afraid of Rio Tinto," Brnabic said. "We are here for our people and our country. They can do whatever they think they should do. This is the final decision of the government of the Republic of Serbia. "

It is widely believed that Serbia, which formally seeks European Union membership but instead has been forging close ties with Russia and China, may want to hand over the lithium mining to China by sidelining Rio Tinto from the project in which it has pledged to invest $2.4 billion.

Throughout its almost 150-year history, Rio Tinto has faced accusations of corruption, environmental degradation and human rights abuses at its mining sites.

Environmentalists are also upset at the Serbian government's lack of response to rising pollution in the country.

Jovana Gec contributed to this story