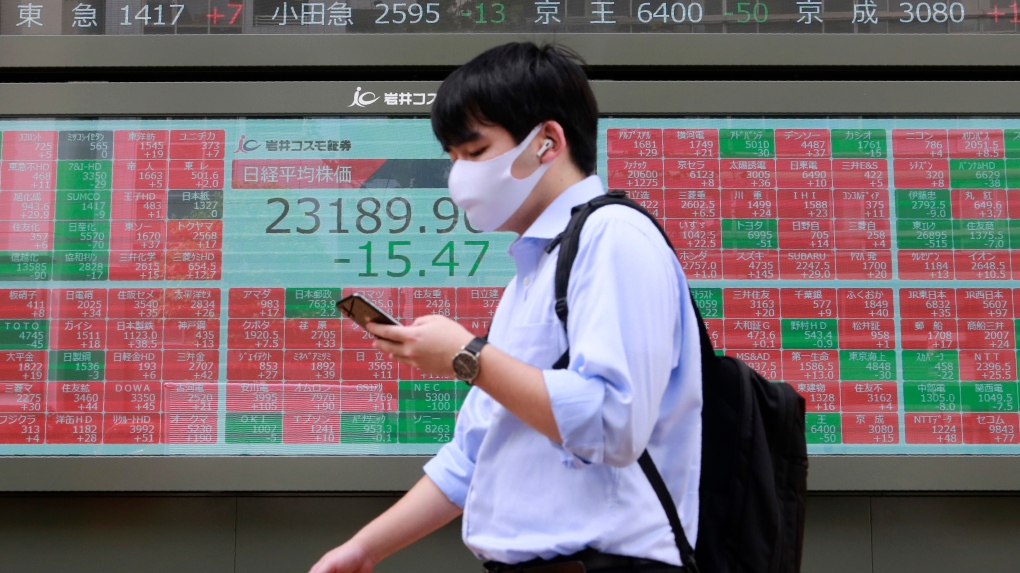 A man walks by an electronic stock board of a securities firm in Tokyo, Monday, Sept. 7, 2020. (AP Photo/Koji Sasahara)

The S&P 500 rose to a record high Friday on a short trading day in New York, after the Dow Jones industrial average crossed 30,000 for the first time earlier in the week.

The rally to record highs came despite market closures for Thursday's U.S. Thanksgiving holiday and an early end to trading on Friday.

“The overall sentiment in equities we've seen since the (U.S. presidential) election is much more positive -positive expectations on the economy, as a result of vaccines as a result of closure with the election, perhaps less volatility, and less geopolitical risk coming out of the White House,” said Philip Petursson, chief investment strategist at Manulife Investment Management.

“Investors are really looking at the environment as if the glass is half full.”

The TSX, however, remains a few hundred points shy of its February record high of 17,970.51.

Canada's biggest city, Toronto, has limited non-essential shopping during the key holiday season amid a spike in cases of COVID-19, and Prime Minister Justin Trudeau said more than half of Canadians will be inoculated by next September “if all goes well,” amid limited domestic vaccine manufacturing capacity.

“It's just a matter of time, and that's really what the markets are focused on - markets being a forward-looking mechanism,” said Pertusson.

“Despite the lockdowns that we're going through right now in Toronto, Peel or other areas of the country - despite the fact that we don't have the vaccine readily available this year, it's coming. The environment is incrementally improving.”

Petursson said the Canadian dollar was the “key thing” he was watching on Friday.

“The Canadian dollar has been entirely lined up, in our view, with oil prices,” said Petursson.

The health care sector rose 4.89 per cent on Friday, led by a nearly 18 per cent jump in shares of Aurora Cannabis Inc. and a 7.36 per cent jump in Canopy Growth Corp. Petursson attributed the upswing to the potential for a vote on decriminalization of cannabis in the United States.

Petursson said he has been watching the move in gold alongside more pronounced volatility in Bitcoin prices. Both gold and Bitcoin could be ways investors protect their investments as central banks lower interest rates, he said.

Heading into the Cyber Monday shopping sales, Petursson said it's important for investors to remember that a month of holiday shopping remains, and not to get too fixed on one or two days of sales.

While the gift-giving season could be dampened by the economic downturn caused by COVID-19, Petursson said shoppers could end up being unexpectedly upbeat by this time next month.

“So far, we're not seeing any weakness on the side of the consumer in Canada or the states. In fact, they continue to surprise to the upside,” said Petursson.