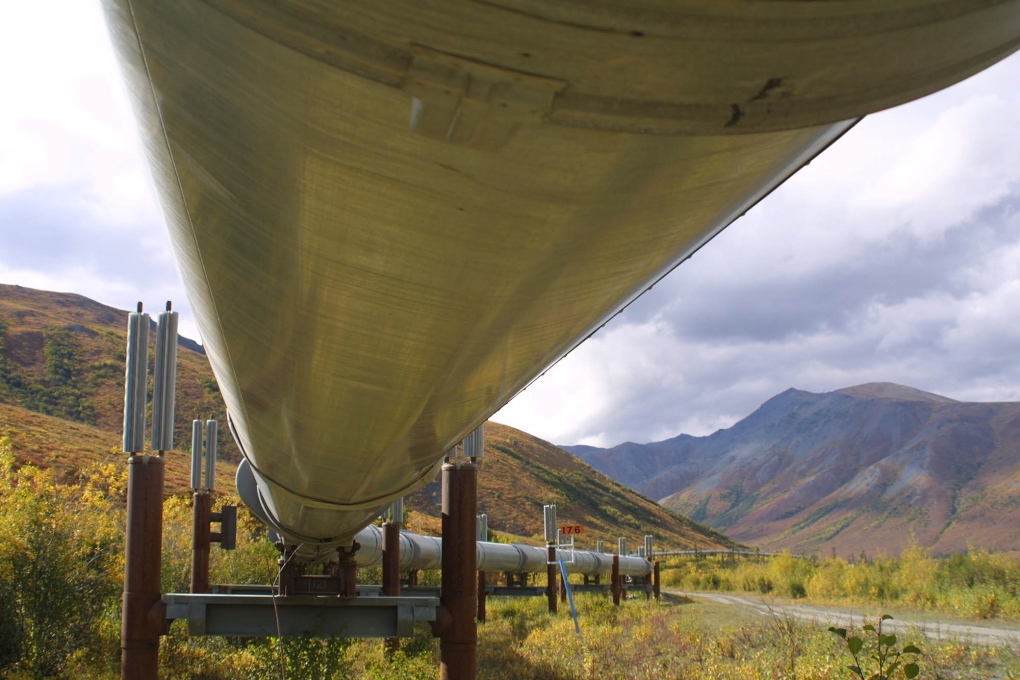 This undated file photo shows a portion of the Trans-Alaska pipeline that feeds oil to the West Coast, snakes its way across the tundra north of Fairbanks, Alaska. (AP / Al Grillo)

Imagine being about to drive all the way to London, England, without ever getting on an airplane or ferry.

It could happen one day, if a proposed superhighway and railway system goes ahead, linking North America and Europe via Alaska and Siberia.

The head of Russian Railways, Vladimir Yakunin, recently proposed a plan for the combined superhighway at a meeting of the Moscow-based Russian Academy of Science, according to The Siberian Times. http://siberiantimes.com/business/investment/news/n0160-plans-for-new-transport-route-unveiled-to-link-pacific-with-atlantic/

The hugely ambitious project, dubbed the Trans-Eurasian Belt Development (TEPR), would see a new highway and railway line constructed alongside the existing Trans-Siberian Railway, and accompanied by new oil and gas pipelines.

The superhighway would cross Russia's isolated eastern regions, cross the Bering Strait between Russia and Alaska, travel through the glacial wilderness of Alaska into Canada, and finally wind into the U.S.

Not only would it bring new train, road and pipeline networks, the plan would also see the creation of infrastructure for the delivery of electricity and water supplies.

"This is an inter-state, inter-civilization, project," Yakunin said. "The project should be turned into a world 'future zone,' and it must be based on leading, not catching, technologies."

Yakunin provided no details about the costs of such a plan, nor how it could be achieved in what many consider the coldest and most challenging climate on Earth.

But civil engineer Rick Baldasti, the head of the municipal and highways department at LEA Consulting Ltd. in Mississauga, Ont. says it sounds like a very expensive undertaking.

"I could see that being a multi-billion -- multi-trillion -- dollar venture," he told CTV News.ca.

Baldasti says, while the idea sounds "awesome," it would be extremely challenging to construct such major infrastructure on land covered by permafrost, glaciers and snow.

"There are no roads or bridges or structures up there, and there's a reason for that: the climate just precludes it," he said.

The superhighway would likely cross the Bering Strait at its narrowest point, leading into the Wales Indian Reservation. But even at that point, 87 kilometres of ocean separate the two continents.

It would be impossible to build a bridge across a span like that, while building an tunnel beneath the ice would be likely just as impractical.

Even if the engineering challenges could be solved, there's also the problem of how to cross the uninhabited areas of Alaska. Currently, the only way to get from Wales to the next major town, Fairbanks, is to take a 10-hour flight.

Baldasti notes there are pipelines across Alaska, but they are built on stilts across the permafrost.

"You can build gas pipelines on permafrost, but it's a bit like building on Jell-O," he says.

Though the pipelines are made to be somewhat flexible to account for shifts in ice, that wouldn't be possible with a rigid rail line or highway, he says.

While building across the Arctic sounds daunting, that doesn't mean there aren't those who want to try. There's an abundance of natural resources in the North that many are eager to access, and the Russian pipeline project could allow that to happen.

"The idea of combining a pipeline and rail line sounds like an awesome idea. I'd love to get involved with it. But I'd say it's more of a fairy tale," he said.