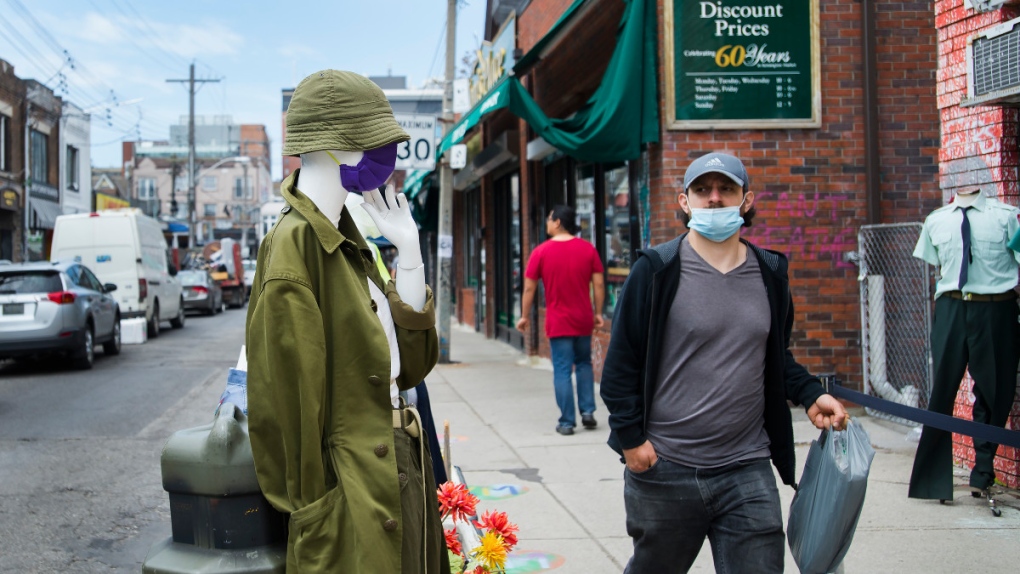 A man walks by a mannequin wearing a mask as store fronts open up for business in Kensington Market during the COVID-19 pandemic in Toronto on June 2, 2020. (THE CANADIAN PRESS / Nathan Denette)

OTTAWA -- Retail sales in Canada "hit a wall" in July after big gains in May and June, a sign that the economic recovery could be slow and bumpy.

Statistics Canada said Friday overall retail sales in July rose 0.6 per cent to $52.9 billion, helped by higher sales at motor vehicle and parts dealers and gasoline stations, after posting gains of more than 20 per cent in both May and June.

"It looks like retail sales hit a wall in July," CIBC senior economist Royce Mendes said. "It's a pretty sharp pullback after some explosive growth in retail spending in June."

Economists had expected an increase of 1.0 per cent for the month, according to financial markets data firm Refinitiv.

Sales were up in six of 11 subsectors in July, the agency said, with the motor vehicle and parts dealers subsector contributing the most to the increase with a 3.3 per cent increase. Sales at gasoline stations rose 6.1 per cent.

Robert Carter, industry adviser with StratonHunter Group, said the surge in gasoline sales could be explained in part by "staycations."

"As the economy opened up and people could move around, there were a lot of staycations," he said.

Carter said the uptick in vehicle sales is likely due to improved household savings and pent-up demand.

"People may have felt they had a little bit of extra income to buy that vehicle that they were putting off."

Meanwhile, sales at food and beverage stores dropped 2.1 per cent in July, potentially the result of stockpiling in previous months, Carter said.

"People probably had a higher inventory of products in their houses than they historically would have," he said. "I think that resulted in a bit of softening in the general household spending category."

"The July numbers continue to reflect the many challenges facing retailers during this pandemic," she said in a statement.

"We can presume that the June numbers released by Statistics Canada last month included some pent-up demand for various products and so the July numbers really present a more accurate state of Canadian retail."

Mendes said the slowdown could be explained by a shift in spending towards the service sector.

"It's possible that households actually just tilted some of their spending away from goods and back towards services," he said, noting that consumers may have spent more on eating at a restaurant or going for a haircut.

A preliminary estimate for August suggested that retail sales increased by 1.1 per cent, by Statistics Canada also said Friday.

Going forward, Mendes said the "recuperation phase" of reopening after COVID shutdowns will likely be slower and rockier, as predicted by the Bank of Canada.

He said ongoing restrictions and household cautiousness will likely lead to slower growth in the coming months.

While BMO chief economist Douglas Porter agreed retail figures will continue to be more subdued in the coming months, he said the latest numbers also included many positives -- most importantly the preliminary estimate for August.

"It's almost comforting to see an economic report that is somewhat back to `normal' in today's moderate retail sales gain," he said in a note to clients.

"While the headline gain was a bit shy of expectations, the much bigger and more important picture is that retail and wholesale activity just carved out perfect V-shaped rebounds."

This report by The Canadian Press was first published Sept. 18, 2020.