Retail sales climbed 0.7 per cent in November to $58.1B, Statistics Canada says 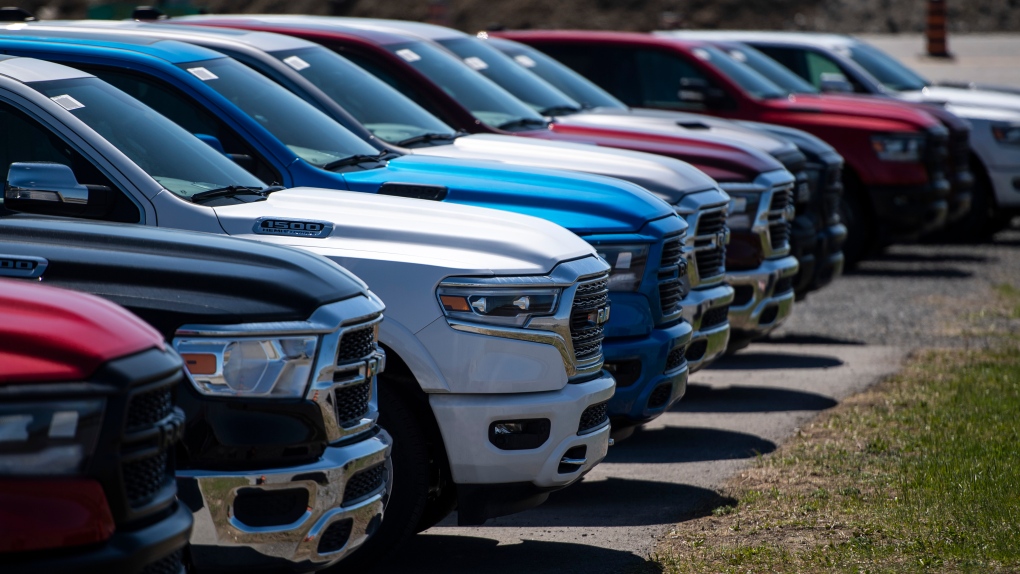 New Dodge Ram pickup trucks for sale are seen at an auto mall in Ottawa, on Monday, April 26, 2021. THE CANADIAN PRESS/Justin Tang
OTTAWA -

Retail sales rose for the second month in a row in November as Canadian consumers spent more on gasoline, building materials as well as food and beverages, Statistics Canada said Friday.

Yet the uptick in retail sales of 0.7 per cent to $58.1 billion fell short of analyst estimates.

It was also down from the 1.6 per cent growth recorded in October, indicating a slowdown after the promising burst in spending posted early last fall.

The potential drop-off in spending is underscored by Statistics Canada's preliminary estimate for December, which pointed to a decline in retail sales of 2.1 per cent for the month.

Though the agency cautioned its early estimate would be revised, it suggests a rocky economic recovery as periods of growth could be followed by setbacks.

“While we were expecting to see weakness in December, the decline appears to be a little larger than we were anticipating,” Andrew Grantham, a senior economist with CIBC Capital Markets, said in a client note.

If advance data for manufacturing and wholesaling set to be released next week also fall short of expectations, it could mean that December GDP was weaker than expected, he said.

“Signs of softening in the economy before the worst of the case counts and restrictions hit may also tip the scales slightly in terms of the Bank of Canada holding rates next week and waiting for signs of a recovery before hiking,” Grantham said.

The slowdown in spending - even before the worst of the Omicron surge in cases and accompanying restrictions - prompted economists to issue muted projections for the coming months.

The Conference Board of Canada said it expects retail sales to decline over the next two quarters before expanding moderately during the second half of the year.

“While we are still optimistic about the future, new waves of the virus could deter our outlook despite Canada's high vaccination rate,” the think tank said in its latest Economic Quick Take.

“As we've learned with Omicron, widespread lockdowns are not entirely a thing of the past.”

Among retailers in the region surveyed, 21 per cent said sales were impacted by the floods - mainly due to transportation disruptions.

Some of the bright spots in consumer spending included sales of clothing and clothing accessories, which increased three per cent in November.

In volume terms, retail sales were up 0.2 per cent in November.

BMO Capital Markets economist Shelly Kaushik said retail sales managed a decent gain in November though much of it was due to higher prices as inflation eroded purchasing power.

Meanwhile, December is projected to record an outright decline, she said.

“Tighter restrictions look to have clamped down on spending in December,” Kaushik said in a client note. “Consumers appear ready and willing to spend, but they can only do so when allowed.”

Looking ahead, Ksenia Bushmeneva with TD Economics said the picture for retail spending is mixed.

“Capacity limits, staff absenteeism and health concerns may weigh on in-store sales at the start of the year,” she said in a note. “Supply-chain bottlenecks are also likely to intensify once again, leading to delayed shipments, higher prices, and less choice for consumers.”

Retailers with online operations though could also see a boost to their sales as consumers redirect their spending from services to goods, similar to previous episodes of lockdowns, Bushmeneva said.

This report by The Canadian Press was first published Jan. 21, 2022.