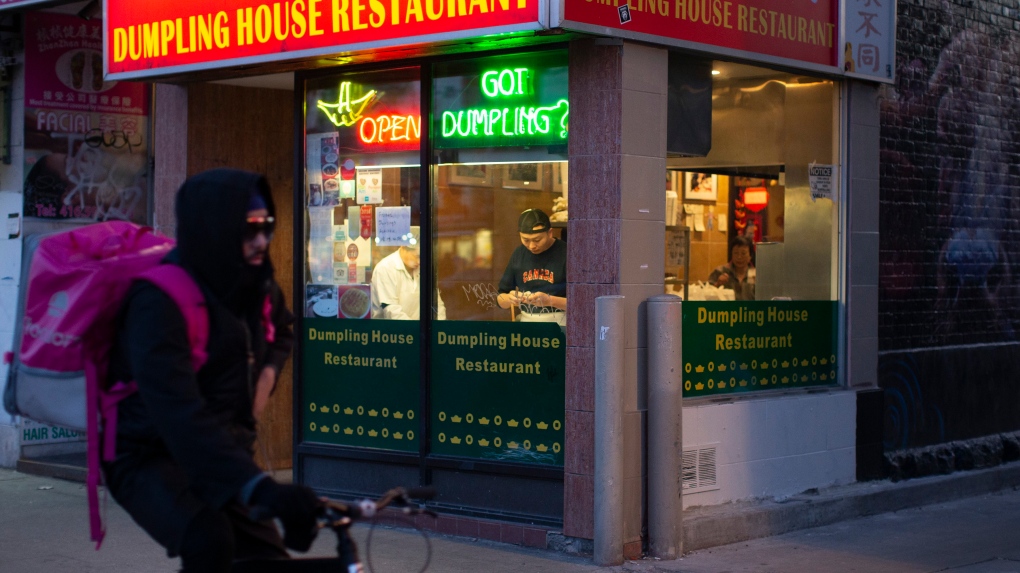 A food delivery courier cycles past a restaurant in Toronto's Chinatown, on Saturday March 21, 2020. THE CANADIAN PRESS/Chris Young

TORONTO -- Restaurant owners say food delivery apps have taken too big a bite out of their revenues for too long.

Food delivery apps were forced to implement lower fees when dine-in service was closed during the COVID-19 pandemic, and restaurants say the change should be made permanent if they are to recover from the crisis.

"I really hope they do keep the lower fees because it does help a lot," said Sharon Bond, the owner of Westbank, B.C.'s Kekuli Cafe. "Costs have gone up tremendously.

"We're in a pandemic so (everyone's saying), 'let's charge triple for everything."'

Her remarks come as caps on the fees charged by delivery apps have been lifted or are edging toward summer end dates in several provinces.

Food delivery companies typically charge restaurants a commission for every delivery, sometimes as much as 30 per cent of the order cost. Fee caps were added by five provinces after dining rooms were forced to close for months during the pandemic, increasing their reliance on meal delivery apps to pay the bills since many were offering takeout for the first time and didn't have the mechanism to offer delivery themselves.

Ontario, B.C., Nova Scotia, Saskatchewan and Quebec temporarily capped commissions between 10 and 20 per cent for as long as stay-at-home orders or restaurant closures were in place.

Asked whether they will consider extending their caps, the provinces said the measures were meant to be temporary, though spokespeople noted additional measures like patio allowances continue.

When the pandemic struck, Bond had little choice but to use third-party apps for the first time to deliver bannockwiches and tacos to customers of her Indigenous restaurants.

She wants B.C.'s 15 per cent cap to stay because it helped the restaurant survive and prevent staff layoffs, but she said it will be months until they're serving a full dining room again.

Kevin Edwards, the chief executive of SkipTheDishes, wants to see restaurants rebound from the pandemic, but called the prospect of a permanent cap "scary."

"There's no chance we're going to be able to maintain our platforms with these commission caps," he said.

SkipTheDishes charged restaurants a 25 per cent commission on meals prior to the pandemic, but when the crisis began, it used a rebate to ensure local, independent restaurants pay less than 20 per cent in commission while dining in is suspended.

New restaurants joining the platform during the restrictions were not charged any commission for 30 days and those using their own staff for deliveries paid a 10.5 per cent commission.

Meanwhile, Uber, which typically charges a 30 per cent commission, dropped fees on pickup to zero, online ordering to 7.5 per cent and 15 per cent for restaurants doing their own delivery.

When asked about caps, the company said in an email that it operates at a "negative margin" and fees don't provide profit for Uber, and the company needs to be able to cover operating costs.

For example, he said many of the caps didn't zero in on independent restaurants alone, so national chains and other successful brands accounted for between 50 and 60 per cent of the rebates Skip gave out.

If caps continue, he imagines it will get harder for delivery services to expand to new markets and manage costs.

"The customer is going to have to bear the burden" he said. "You can't not be viable."

But the higher fees weigh on restaurants, especially as they try to recover from a crisis, said Canadian Federation of Independent Businesses.

The organization, which represents at least 110,000 small businesses, said in an email that it trusts major food delivery apps will keep their fee structures at current or even lower levels.

If fees return to previous levels, the group said governments should consider how to ensure prices are reasonable.

Toronto restaurateur Chieff Bosompra believes the sweet spot for fees is between 10 and 15 per cent, but admits even 20 per cent is acceptable.

Given how many people are affected by the fees, he would like to see an industry working group giving app companies, restaurants, couriers and cities a venue discuss how fees and policies can be fair to all.

"It's like a gift and a curse," he said, of delivery apps.

"We need them and they know we need them, so they're really squeezing us."

He first encountered delivery app commissions months into the pandemic, when he opened Aunty Lucy's, a burger joint named after his late Ghanaian grandmother, who died on opening day.

As a Black entrepreneur getting into business after the death of George Floyd, his restaurant was given prime spots on some apps, but simultaneously charged high commissions.

He increased prices because of his high fees and the rising costs of beef, chicken and lettuce.

"But there's only so much you can really charge for food and the profit margins are pretty slim," he said.

"Things are becoming more expensive and then when you have to pay 20 or 30 per cent it just makes things really tight."

This report by The Canadian Press was first published June 13, 2021.