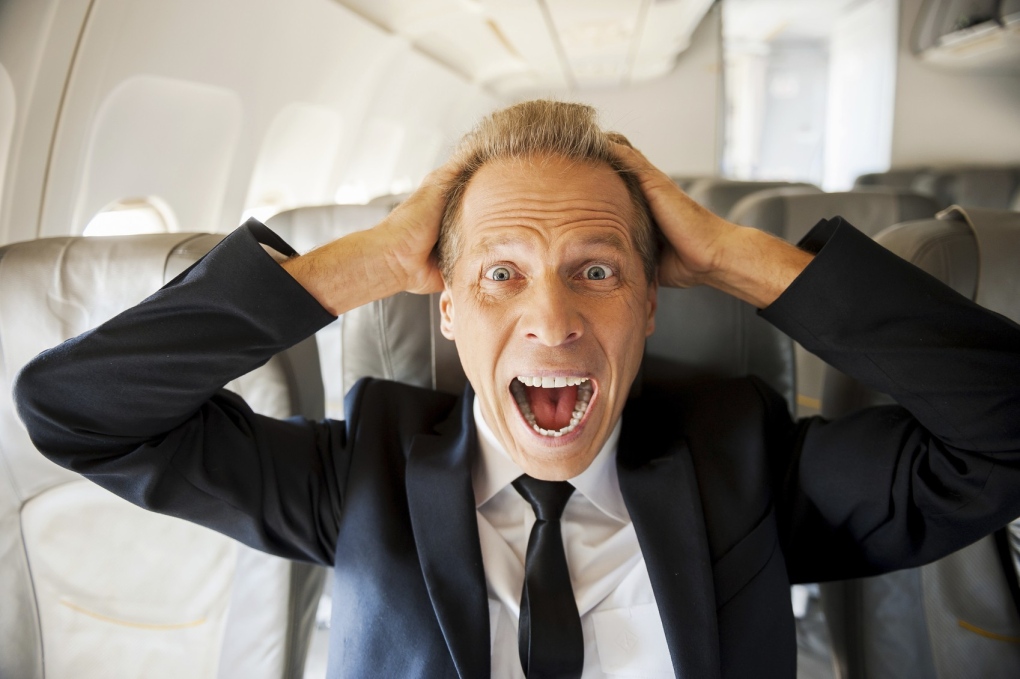 New figures released from the aviation industry reveal that incidents of air rage is on the rise.(g-stockstudio / Istock.com)

WASHINGTON -- Incidents of unruly passengers on planes are increasing, and more effective deterrents are needed to tackle the problem, a global airline trade group said Wednesday.

There were 10,854 air rage incidents reported by airlines worldwide last year, up from 9,316 incidents in 2014, according to the International Air Transport Association. That equates to one incident for every 1,205 flights, an increase from one incident per 1,282 flights the previous year.

Incidents have been rising almost consistently since 2007, when the association began tracking the issue. That year airlines reported 339 incidents to the association.

A majority of incidents involved verbal abuse, failure to follow crew instructions and other anti-social behaviour. Eleven per cent included physical aggression toward passengers or crew or damage to the plane. Alcohol or drugs were a factor in 23 per cent of the cases. In the vast majority of incidents involving drugs or alcohol, the substances were consumed before boarding or imbibed secretly on board, the association said.

Training staff in airport bars and duty-free shops to sell alcohol responsibly, including avoiding offers that encourage binge drinking, can cut incidents by half, the association said, citing an initiative by Monarch Airlines at London's Gatwick Airport.

Airlines already have strong guidelines and crew training on "the responsible provision of alcohol," the association said.

A woman in England pleaded guilty in June to assaulting an easyJet pilot. Prosecutors said she punched the pilot in the face after he deemed her too intoxicated to fly. In another case, a male passenger allegedly urinated on fellow easyJet passengers as they were waiting to deplane after landing at Edinburgh.

Six men involved in a drunken brawl during a Jetstar flight from Sydney to Thailand in July were ordered off the plane after it diverted to Indonesia.

An American Airlines pilot tackled one passenger to the floor after he tried to force his way off the plane as it taxied to the gate in Charlotte, North Carolina. "You don't put your hands on my flight attendant!" the pilot can be heard yelling on a video taken by another passenger. The unruly passenger was arrested and charged with being intoxicated and disruptive.

Charlie Leocha, president of Travelers United, an advocacy group for airline passengers in Washington, said he knows of no changes in the way alcohol is sold in airports or on planes that would account for the increase in the rate of incidents. But he noted that the increases correspond with efforts by airlines to squeeze more passenger seats onto planes by shrinking legroom and seat width.

Other recent incidents include a Los Angeles-bound Delta Air Lines flight diverted to Tucson, Arizona, escorted by two Air Force fighter jets, after a passenger refused to return his seat. The following month, the FBI and Hawaii state sheriffs arrested a 35-year-old man who allegedly bit a flight attendant on a Hawaiian Airlines flight from Pago Pago in American Samoa to Honolulu.

Airlines also want more countries to ratify a 2014 treaty that closes gaps in laws for dealing with unruly passengers. So far, only six countries -- Bahrain, Congo, Dominican Republic, Gabon, Guyana and Jordan -- have ratified the pact.

"More are needed in order to have a consistent global approach to this issue," said Alexandre de Juniac, the association's director general. 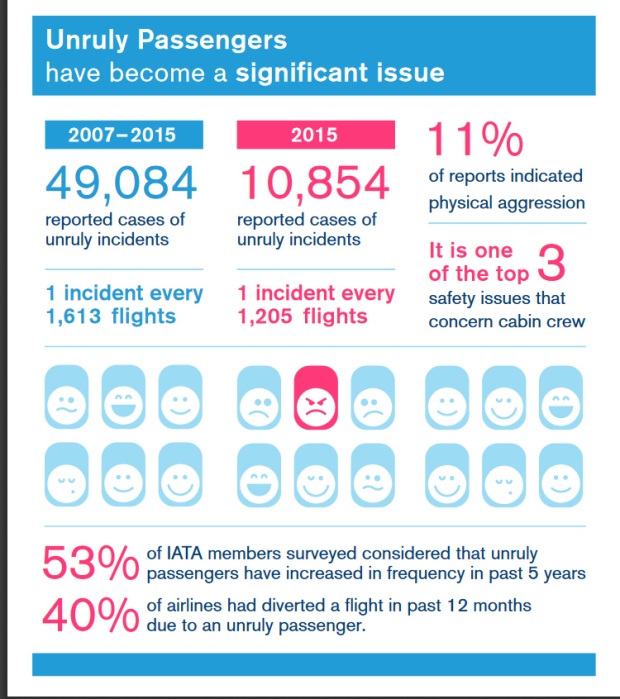 This infographic from the International Air Transport Association shows key stats from a 2015 study of air rage.