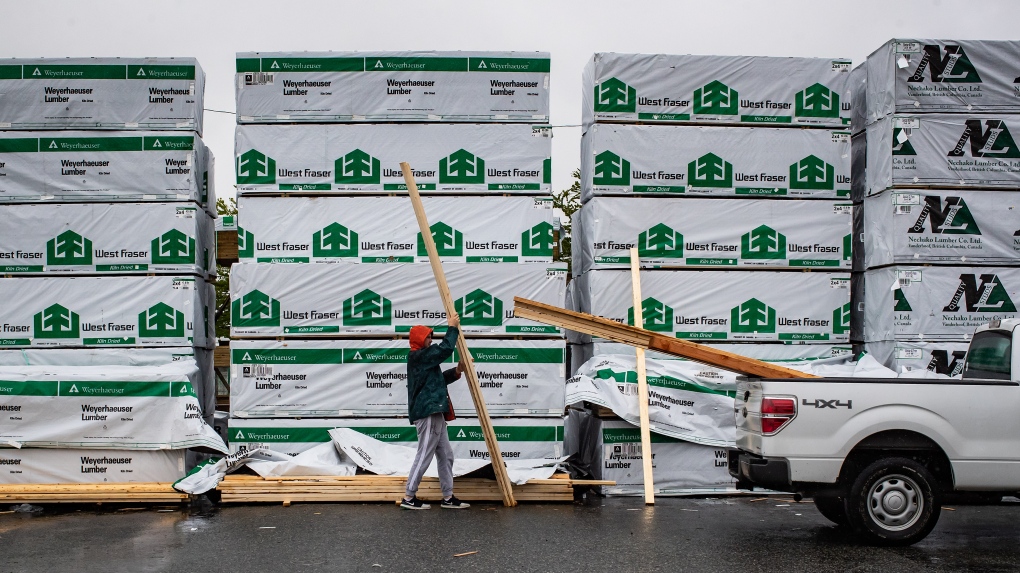 Record lumber and building panel prices are adding thousands of dollars to the cost of building a home in Canada as renovation and new housing demand meets a shortage of supply. THE CANADIAN PRESS/Darryl Dyck

CALGARY -- Soaring lumber and wood panel prices are adding thousands of dollars to the cost of building a home in Canada as strong renovation and new housing demand outstrip supply.

The latest price list from research firm Random Lengths released Thursday shows SPF (spruce, pine, fir) two-by-four boards at a "mindboggling" record level of US$760 per thousand board feet, up $82 on the week, according to Kevin Mason, managing director of ERA Forest Products Research.

"You've got buyers who care more about just getting product than they do about the price," he said in an interview.

"The companies have purchase orders sitting on the desk and it's, like, when you get product, send it to us, and just tell us what we owe you. Buyers don't care. Right now, it's an absolute panic, a scramble to get product."

The run-up over the past several weeks has demolished the previous North American record high of US$650 set in mid-2018, he said, adding prices for other building products are rising just as quickly.

Homebuilders say increases this year to date will translate into $8,000 to $10,000 more to build a typical single-family house in Canada.

Jayman Built Homes will have to consider passing on its higher costs to customers when lumber supply contracts expire at the end of August, said president and chief operating officer Dave Desormeaux.

"Most builders, I believe, would just pass it on and increase the price of a home for the cost of the materials," he said, adding his firm, which plans to build about 700 homes this year in Edmonton and Calgary, has the capacity to absorb short-term commodity fluctuations.

"Right now we're not affected but, come Sept. 1, when we're building houses, it's going to be a huge increase for us because we've eaten it (higher prices) along the way."

But Bobby Richardson, whose Woodlands Mountain Homes builds five or so custom homes per year in Bow River Valley communities west of Calgary, says he has no choice but to pass his higher costs on to current customers.

The rise in demand comes from increased interest in renovations by people working from home during the pandemic, said Mason, along with a strong housing market in Canada and the U.S. fuelled by people's renewed appreciation of having their own homes and aided by extremely low interest rates.

Supply, meanwhile, has fallen as several mills in British Columbia were closed over the past year due to a shortage of wood fibre after a mountain pine beetle infestation and recent wildfires. Those mills aren't likely to reopen soon, he said.

Many North American mills curtailed production temporarily earlier this year because of the COVID-19 pandemic lockdowns.

Lumber production was about 1.6 billion board feet lower in April and May compared to the same months in 2019, said analyst Paul Quinn of RBC Dominion Securities in a report. That's equivalent to removing about 4.5 per cent of total 2019 production in North America.

"We expect that actual demand was higher than production in both April and May due to strong R&R (renovation) demand, which resulted in distributors drawing down inventory levels," he said, adding the tight market could persist even though most curtailed mills have returned to production by the end of June.

"With new residential construction returning with a vengeance in June-July, we expect that even normal supplies would be wholly inadequate to meet demand."

Canadian lumber production declined by 18.9 per cent in May, he said, with B.C. production down 26.2 per cent year-over-year to 677 million board feet. In the U.S., production fell by 6.8 per cent.

In a research report, CIBC analysts point out that current lumber prices are just two per cent less than the all-time peak in November 1996 when the price for two-by-fours hit US$480 (or US$775 in today's dollars after adjusting for inflation).

Canadian lumber producers coming off better-than-expected second quarter financial reports are making gains on the commodity price rally as investors flock to snap up their shares.