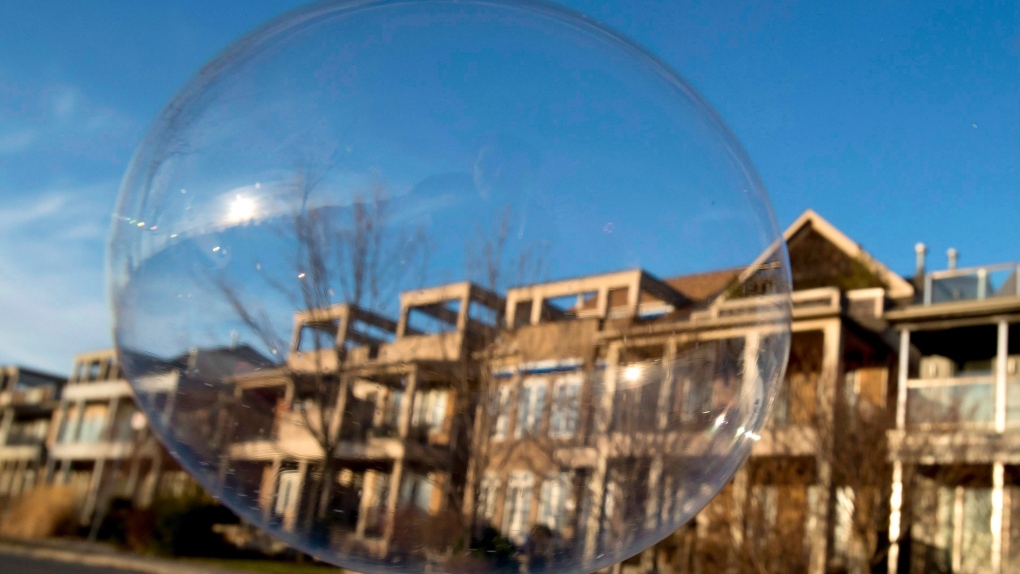 A Toronto neighbourhood is seen through a soap bubble on Sunday April 9, 2017. There is growing concern that the Toronto real estate market is in a bubble condition. (THE CANADIAN PRESS/Frank Gunn)

Toronto’s whipsawing real estate market erased an estimated $135 million in value in 135 days from nearly 1,000 homes as prices tumbled from a dizzying high, according to a new study.

That’s just one of the key takeaways that John Pasalis, the president of Toronto’s Realosophy brokerage, revealed in his 39-page analysis of the stunning rise and fall of real estate in and around Canada’s largest city last year.

Here are some of the figures:

$135 million – The amount of money that 988 homeowners lost in less than five months after the report said the housing bubble burst.

$140,200 – The average price drop on 866 properties that failed to close after initially being sold, when a new buyer was found later in the year.

28 – The multiple of annual rental value that average Greater Toronto Area (GTA) home prices reached by the end of 2017, a figure that suggests the region is less affordable than San Francisco, Los Angeles and New York, according to the study.

Realosophy’s report is based on data from listings from the MLS website.

The bubble is pricked. So now what?

The future looks far less volatile for buyers and sellers in the GTA, with the condo market being the final meaningful pocket of risk, according to Pasalis. In the near term, he’s calling for neither a continued correction, nor a return to the break-neck price increases that defined so much of 2017.

“We’ve kind of pricked this bubble,” Pasalis told CTVNews.ca. “For this year, it looks like things are going to be pretty stable. It’s possible you might see price declines going forward in the future, but something else has to happen.”

That something else would have to be on the magnitude of the collapse of the ongoing North American Free Trade Agreement negotiations, or the onset of a recession, in his view.

Pasalis said he expects things to be comparably quiet on the policy front as a combination of new rules that force lenders to “stress test” certain borrowers with uninsured loans, foreign buyer’s taxes and rising interest rates cool off demand.

“I think it would be a mistake to do anything right now. The market needs to kind of absorb these big changes that have already happened,” he said. “It’s too early to introduce any new big measures.”

I don't see this happening again any time soon. That said, there are probably many more properties that failed to close in 2017 that are still for sale today. We only measured properties that successfully sold to a new buyer after the first deal failed. https://t.co/KYPQqPZv1u