Eco-conscious homes are 'the future of housing,' experts say

Eco-conscious homes are 'the future of housing,' experts say

When it comes to Canadian real estate, much of the focus over the last several months has been on attempts to cool red-hot housing markets across the country, with activity fuelled by low inventory and high competition.

But eco-conscious homes are emerging as unique alternatives to most houses currently on the market, said Chris Chopik, a real estate expert based in Toronto. According to him, net-zero living will eventually become the go-to standard for newly constructed, high-quality homes.

“This is definitely the future of housing, for sure, in Canada,” Chopik told CTVNews.ca in a telephone interview on June 2. “In a world where we're also trying to do the right thing around climate change, it’s also a regulatory imperative … This is going to be a very typical kind of housing in 10 years.”

Eco-friendly homes are considered energy efficient in their construction and use. These houses are built with materials that are not toxic to the environment, and have features that help offset any of the greenhouse gas emissions they produce. Chopik said he is seeing a growing demand for eco-friendly housing in Canada and around the world, with building standards becoming more energy efficient.

Sean Homes is a company based in Ontario that is currently constructing custom net-zero-ready homes – houses that are capable of producing net-zero greenhouse gas emissions in order to offset their carbon footprint. One community project in particular, called Rainwater at 339 Veterans Dr., is comprised of 35 net-zero-ready freehold townhouses as well as a five-storey condominium building comprised of 38 units. 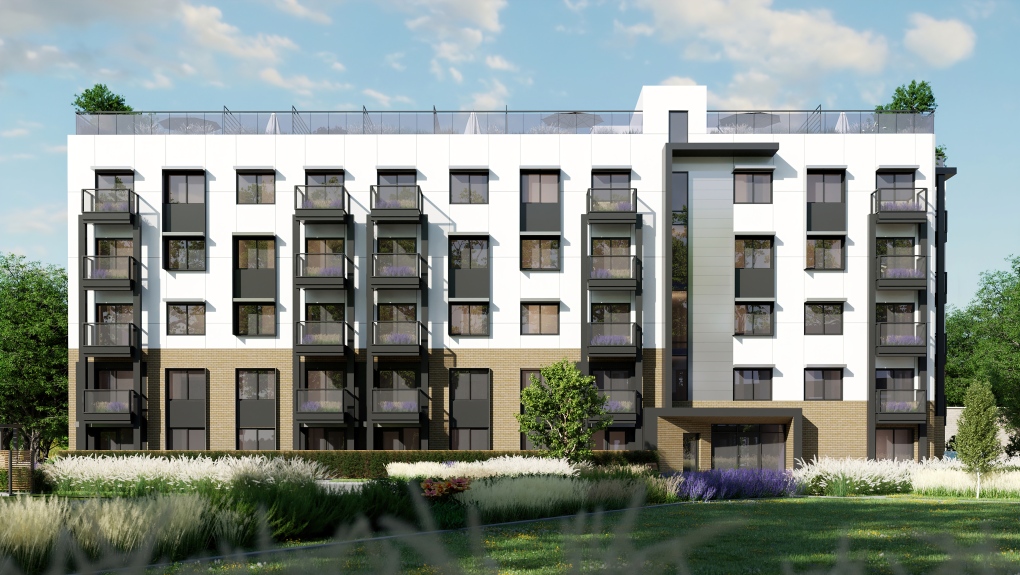 In this photo is a rendering of the condominium units in the Rainwater community at 339 Veterans Dr. in Barrie, Ont. (Sean Mason, Sean Homes)

“When we say net-zero-ready, we build them to a point where you decrease the energy consumption required, so that if you were to add on renewables, that they would [result in] net zero emissions,” Sean Mason, the founder of Sean Homes, told CTVNews.ca on June 1 in a telephone interview.

Part of this initiative involves efforts to eliminate the use of natural gas, with townhomes and condo units instead relying on a geothermal system, or heat pump, to supply hot and cold air. The townhomes also use a geothermal system to heat water. Mason’s condo units also feature cross-laminated timber flooring, which is capable of capturing and storing carbon dioxide. Both types of properties also include solar shading devices, which help keep out the sun and reduce the need for air conditioning in months where the weather is warmer. All properties are EnergyStar certified, and feature exterior insulation to better regulate temperatures inside each home.

“It's a holistic system made up of 50 different decisions,” Mason said. “When you put it all together to get more than the sum of the parts, and it's a better place to live … that makes me happy. I feel like I’m accomplishing something for the greater good.”

While construction on the Rainwater community has yet to begin, all units that have been placed on the market starting in May have been sold, Mason said. Townhouses carry price tags ranging from $699,000 to about $900,000 each, while condominium units are priced between $400,000 to $800,000 each.

His project forms part of an initiative led by the Canadian Home Builders’ Association (CHBA) that involves the construction of net-zero and net-zero-ready multi-unit residential buildings in Canada, Mason said. A total of six builders from across the country are involved, said Marie Hanchet, CHBA’s project manager for the initiative. Each builder is constructing stacked homes in order to reduce upfront costs, she wrote in an email to CTVNews.ca on June 6. So far, three builders have completed construction, which includes 12 units in Saskatoon, 16 units in Calgary, and 11 in Edmonton so far.

Aside from homes that are built with environmental impact in mind, it’s also possible to retrofit existing homes so that they exhibit more environmentally-friendly features, Chopik said. An overwhelming majority of houses currently on the Canadian market are existing homes that will be resold, as opposed to new builds, he said. The movement towards eco-friendly living will need to involve renovating homes that already exist in order to make them energy efficient, he said.

“Every house can become a high-performance house, or can get much better relatively easily,” Chopik said. “Our challenge in the next 30 years is to bring all of the housing stock in Canada up to the standard that Sean is building today.”

These renovations can include adding solar panels to roofs or installing a heat pump to heat and cool a home instead of using a furnace and air conditioner. Heat pumps are decarbonized alternatives that run on electricity rather than fuel. Homeowners can also consider swapping their glass windows for fibreglass, which wear better over time and provide a tighter seal to improve insulation.

Chopik does admit that certain features of eco-friendly homes can be more costly than those typically included in an average home. But the short-term pain tied to forking over more cash will contribute to long-term gains, he said.

“Conventional shingles need to be replaced relatively often at great expense, whereas the steel roof will last a homeowner's lifetime in a house,” Chopik said. “You spend a little bit more on the front end, but you get a more durable, long-lasting result.” 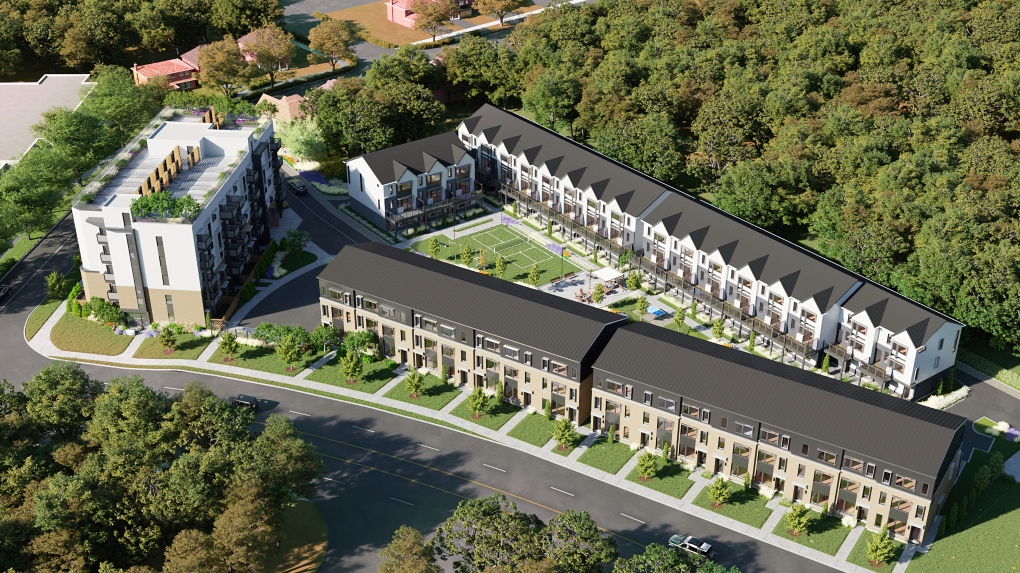 In this photo is a rendering of the Rainwater community at 339 Veterans Dr. in Barrie, Ont. (Sean Mason, Sean Homes)

While Hanchet says the initial cost of a new net-zero home “can be higher than homes built to building code,” there are often long-term operating advantages thanks to greater energy efficiency.

“This means while the upfront cost of the home is slightly more, leading to higher mortgage payments, the annual utility cost savings from the energy efficiency measures offsets this premium fully or partially, depending on the project,” Hanchet wrote in an email.

Mason’s company, for example, is collaborating with Enbridge, which owns the home’s energy assets and leases them out to customers over 40 years. This will make monthly payments more affordable, he said. Taking into consideration the fact that a geothermal system is about four times more efficient at generating energy than a gas heater, this results in more value per dollar, Mason said.

“You put one unit of energy in [and] you get four times the units out with a geothermal system,” he said. “With natural gas, when you're heating your house … you would put one unit of gas in, and depending upon the efficiency of your furnace, if you're in an old house, you're going to get 80 per cent out. If it's really, really efficient, you'll get 96 or 97 per cent out.”

The result is heating bills that are less in net dollars, Chopik said.

“[You’re] spending less money … because [you’ve] invested in insulation and improved mechanical systems as time has gone on,” Chopik said. “That's your lottery ticket for making that good choice.”

There are also grants distributed by the federal government for certain home retrofits that help reduce costs associated with renovating a home to make it greener. According to Hanchet, the CHBA has seen an increase in the labelling of new net-zero homes year-over-year. When the labelling program was first piloted in 2015, 28 homes were given this designation, but over the last three years alone, more than 200 homes have been constructed and labelled net-zero or net-zero ready each year, she said.

“[We] are expecting that to continue to grow over the coming years,” she wrote.

According to the CHBA’s most recent homebuyer preference survey, the energy efficiency of a home was the third most important feature in newly-built houses, Hanchet said.

“While the majority of people do not search out energy efficiency when initially looking for a new home, messaging on energy efficiency resonates and keeps new home buyers interested in learning more about new developments,” Hanchet wrote.

Based on performance testing with online advertisements that emphasize the energy efficiency of his homes compared to messaging that simply advertises the homes as new builds, Mason said the latter tends to perform better.

“The green message helps reinforce the quality of the product, but … nobody's looking for it,” Mason said. “It's not the search term they put into Google.” 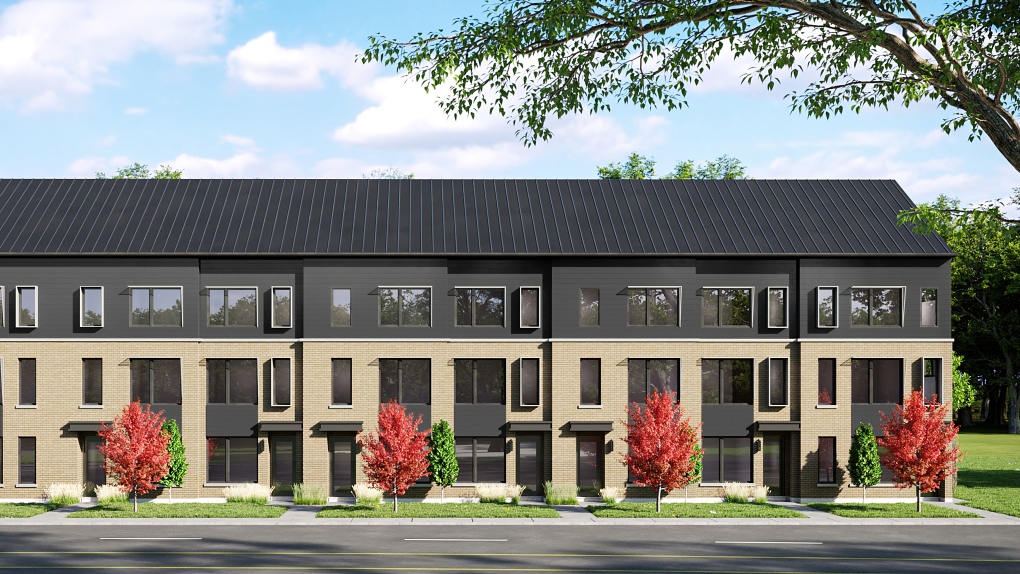 In this photo is a rendering of the net-zero-ready townhomes in the Rainwater community at 339 Veterans Dr. in Barrie, Ont. (Sean Mason, Sean Homes)

According to Chopik, promoting green homes in the resale marketplace is something that can be greatly improved. The real estate expert said he has noticed condominiums in Toronto, for example, that have a Leadership in Energy and Environmental Design certification – this means they meet a specific set of guidelines related to green building practices – but aren’t advertised as such.

“I think it's just outside of their wheelhouse … Not every realtor knows how to explain these technologies,” he said. “I see houses with solar panels where the listing agent says, ‘We can take the solar panel off if you want.’ That's not really advocating for the value of that, in my view.”

More can be done to improve literacy around eco-friendly homes, Chopik said, both from a real estate agent’s point of view, as well as a consumer’s point of view. Part of what he would like to see going forward is the inclusion of more details in home listings that pertain to energy features, Chopik said.

“Really, we just need to be able to know what the difference is, and that's about disclosure.”