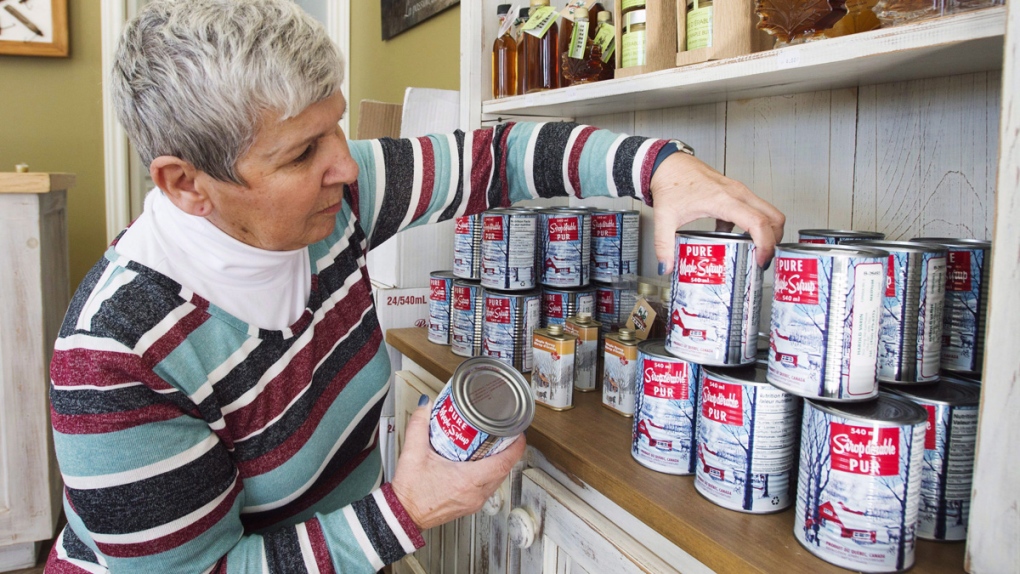 Nicole Varin stocks the shelves at her sugar shack boutique in Oka, Quebec, on Feb. 10, 2017. (Ryan Remiorz / THE CANADIAN PRESS)

Competitors in the United States and elsewhere in Canada are free to produce as much as they want and they benefit from price stabilization due to Quebec's influence on the market, says the document produced by the right-leaning Montreal Economic Institute.

"Quebec still has a strong position but our competitors are getting closer and they are growing faster than we are," Alexandre Moreau, author of the report, said in an interview.

The report says the federation of maple syrup producers in Quebec sets bulk prices and has a monopoly on bulk sales of the product, or 85 per cent of the province's annual yield.

Producers have to go through the federation in order to sell syrup in a container larger than five litres.

The cartel helps stabilize the price of maple syrup and ensures a stable revenue for the province's producers.

According to the federation's latest numbers, Quebec's 13,500 producers harvested about 148 million litres of maple syrup in 2016, worth roughly $436 million. The province produced about 72 per cent of world maple syrup production.

Moreau says his study reveals Quebec's global market share began falling in 2004 -- the year the federation introduced a quota system -- from a high of 82 per cent in 2003 to 72 per cent.

Since 2004, the number of taps harvested in Quebec has increased by 17 per cent compared with almost a 90 per cent hike in the United States, he said.

The report states Quebec imported $20 million worth of maple syrup in 2016, almost all from the United States.

Simon Trepanier of the maple syrup federation said he's not concerned by the growth south of the border.

Markets in Europe and Asia are underserved and there is space, he said, for both the Quebec and American markets to grow.

"We're not competing for the same clients," he said.

Moreau says Quebec's farmers should be free to produce and sell as much maple syrup as they want.

"Otherwise, their share of the global market will likely continue to fall."

Nicole Varin, a third-generation maple syrup farmer in Oka, Que., agrees with Moreau and has found out in the past how dangerous it can be to act against the cartel.

She and her husband ignored the quota system and now face fines up to $450,000.

Varin appealed and her case is before the Quebec Superior Court.

"We are penalized because we have been real entrepreneurs," she said. "We built our own client list and we serve them directly. We don't need the federation."

With files from Julien Arsenault