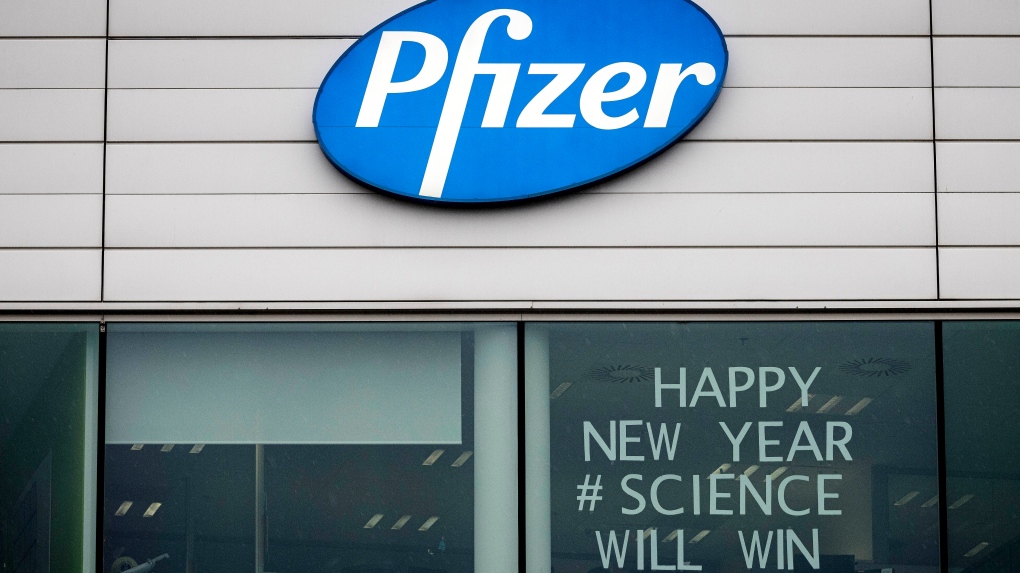 A sign in the window of an office at Pfizer Manufacturing in Puurs, Belgium on Monday, Dec. 21, 2020. (AP Photo/Valentin Bianchi)

Pfizer Inc on Wednesday raised its full-year sales forecast for the COVID-19 vaccine it developed with Germany's BioNTech by 29 per cent to US$33.5 billion, as nations stock up on doses for the rest of the year.

The company also said it could apply for an emergency use authorization for a potential booster dose as early as August, reiterating that a third shot will likely be needed to enhance protection amid a resurgence in infections in many countries.

The drugmaker, whose shot was authorized in the United States, Europe and other regions around the world in December of 2020, has won new orders as rivals such as AstraZeneca and Johnson & Johnson have faced manufacturing and safety hurdles.

Pfizer also competes with U.S. mRNA vaccine maker Moderna Inc, which has not been able to scale up production as quickly as its much larger rival.

"Worldwide demand for vaccines against the virus is expected to continue and the generally positive attitude towards Pfizer’s vaccine ... puts the company in a strong position to benefit going forward," said uk.Investing.com analyst Samuel Indyk.

The updated sales forecast is based on signed deals for 2.1 billion doses. The forecast could be raised again if Pfizer signs additional contracts.

Pfizer said it has shipped 1 billion doses of the vaccine since December. The companies have a production target of around 3 billion doses this year.

The production ramp-up is subject to expansion at current facilities, adding new suppliers and contract manufacturers, the company said. Pfizer records most of the combined sales from the vaccine, and splits expenses and profit 50-50 with its German partner.

Pfizer and BioNTech plan next month to test a version of the vaccine specifically designed to take on the fast-spreading Delta variant, with the first batch already manufactured, Pfizer said. The more easily transmissible variant now accounts for more than 80% of new U.S. COVID-19 cases and has also become dominant in many other countries.

Pfizer raised its estimates for overall full-year profit, with strong sales of blood thinner Eliquis, which it shares with Bristol Myers Squibb, and cancer drug Ibrance.

The vaccine is helping drive a large part of the company's forecast, but Pfizer's base business is also growing, said Mizuho analyst Vamil Divan.

(Reporting by Manas Mishra in Bengaluru and Michael Erman in New Jersey; Editing by Sriraj Kalluvila and Bill Berkrot)

'Now is the time' for students aged 12 to 17 to get vaccinated before school, expert says

How to reset your budget as COVID-19 pandemic restrictions ease