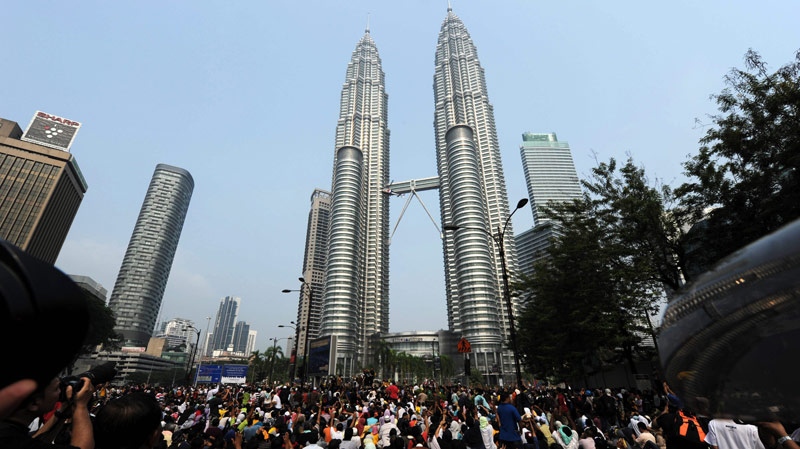 CALGARY -- Petronas and its would-be Canadian takeover target Progress Energy Resources are pressing ahead with plans to ship liquefied natural gas from the West Coast, although the size of the project will depend on Ottawa.

Early design work is underway on the Pacific Northwest LNG project while the federal government decides whether to allow Progress (TSX:PRQ) to be bought by Malaysia's state-owned energy firm for $6 billion.

Industry Minister Christian Paradis, who has the job of deciding whether the foreign takeover is of net benefit to Canada, rejected the deal in October, but left the door open to the companies to re-file their proposal.

Petronas and Progress announced Tuesday they have completed a feasibility study into the LNG facility on Lelu Island near Prince Rupert, B.C., and work is now underway to determine timelines, costs and labour requirements.

"The reality is that Canada and this project have the opportunity to participate on world LNG markets, but we anticipate there will only be a fairly short window that is open," said Progress CEO Michael Culbert in an interview.

As it stands now, the project will include two trains -- or plants to chill natural gas from northeastern B.C. into a liquid state -- each processing 3.8 million tonnes per year.

If the acquisition wins federal approval, throughput at the facility is expected to increase by about 60 per cent to six million tonnes per train annually.

The LNG plant is part of a partnership the two companies announced in mid-2011 to jointly develop Progress' natural gas lands in northeastern B.C. The two firms agreed on a takeover about a year later.

Only 20 per cent of Progress' land in the North Montney shale formation is covered in the joint-venture agreement, but an all-out takeover would provide full access to all that gas, Culbert said.

"You can imagine that the economies of scale of having a larger project actually improve the per-unit costs of increasing the size of that, which ultimately makes us more competitive."

If the project proceeds, the estimated investment is expected to be $9 billion to $11 billion -- 80 per cent of which would be covered by Petronas under the current joint venture.

If the takeover deal gets done and the project winds up being larger, upfront costs will go up accordingly.

The companies aim to file for regulatory approval in early 2013. Culbert said they do not necessarily need to have the takeover deal sewn up by then, though he expects there will be an Industry Canada decision by year-end.

"We'll be moving forward with the project description, which initiates the environmental assessment process and within that, we'll have the ability to adjust as we move forward," Culbert said.