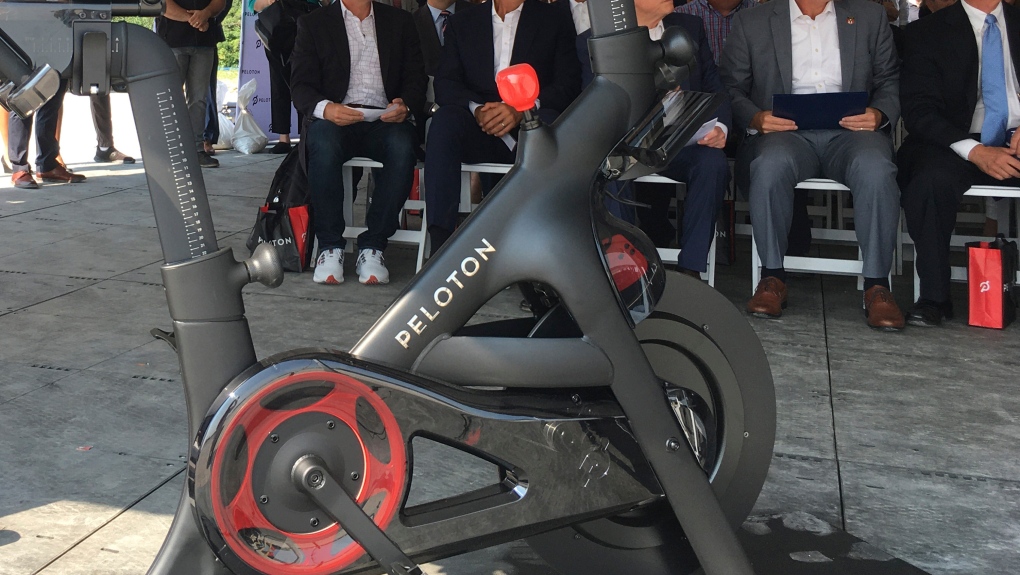 Peloton CEO John Foley, left, is seen behind one of his company's fitness machine along with others gathered for the groundbreaking for the company's first U.S. factory, Monday, Aug. 9, 2021, in Luckey, Ohio. (AP Photo/John Seewer)
NEW YORK -

Peloton is laying off employees and raising prices for some of its equipment as part of its latest bid to make the business profitable and free up cash.

The changes were disclosed Friday in a memo to employees of the maker of high-end exercise bikes and treadmills from its new CEO Barry McCarthy. In addition to cutting 784 jobs, Peloton will close its North America distribution network and shift its delivery work to third-party providers.

The New York-based company said it also plans to "significantly" reduce its North American store base, which now numbers 86. But it didn't say how many locations will close.

The moves mark the latest changes since McCarthy, who served as chief financial officer at Spotify, took over as CEO in February. He replaces John Foley, who co-founded the business 10 years ago.

The coronavirus pandemic set Peloton on a wild ride. Its shares surged more than 400 per cent in 2020 amid lockdowns that made its bikes and treadmills popular among customers who pay a fee to participate in Peloton's interactive workouts.

But nearly all of those gains were wiped out last year as the distribution of vaccines sent many people out of their homes and back into gyms. Now, the company, which recorded its only profitable quarters during the pandemic, is reining in ambitious plans and lowering costs after badly misjudging the staying power of the exercise-at-home trend.

Peloton said it is raising the price of its flagship Bike+ by US$500 to US$2,495 and its Tread treadmill by US$800 to US$3,495. The price increases represent an about-face from April, when it was lowering prices to try to get rid of inventory. McCarthy noted in the memo that at the time, the company was still in the early days of its US$800 million restructuring plan and was under "considerable cash flow pressure."

Last month, Peloton announced it will stop making its own interactive stationary bikes and treadmills, outsourcing those duties to a Taiwanese manufacturer. It also said it was also suspending manufacturing operations at the Tonic Fitness Technology plant in Taiwan for the rest of the year.

As of June 30 of last year, Peloton employed about 8,600 people worldwide, including about 6,700 in the U.S. But in February, it said it was cutting 2,800 jobs, including about 20 per cent of its corporate jobs. At the time, it said instructors who lead interactive classes for Peloton would not be included in cuts.

Peloton also said in February it was winding down the development of its Peloton Output Park factory in Ohio.