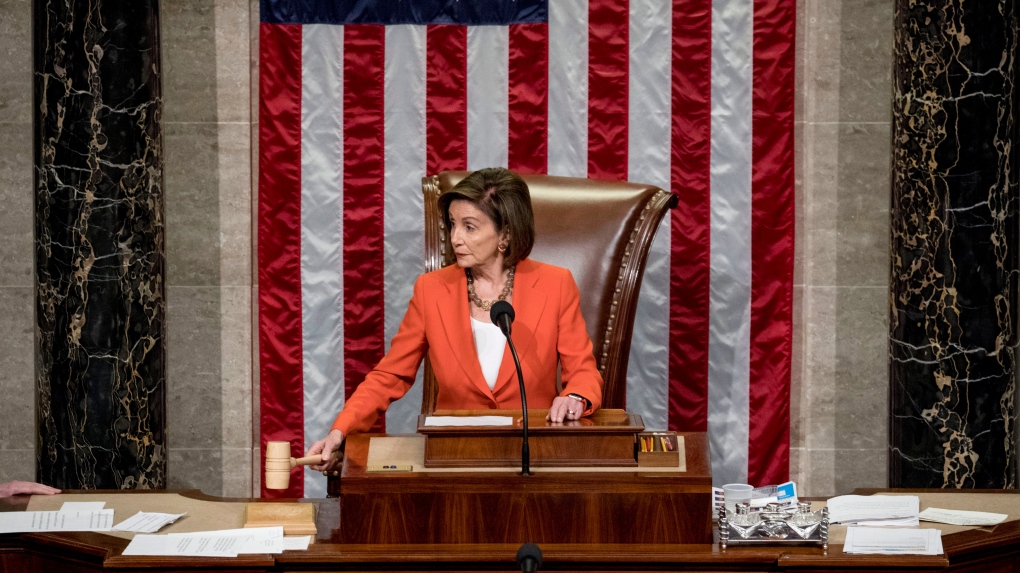 House Speaker Nancy Pelosi of Calif. gavels as the House votes 232-196 to pass resolution on impeachment procedure to move forward into the next phase of the impeachment inquiry into President Trump in the House Chamber on Capitol Hill in Washington, Thursday, Oct. 31, 2019. (AP Photo/Andrew Harnik)

In a news conference Thursday, the California Democrat said an agreement on the pact is "imminent."

The United States, Mexico and Canada last year agreed to replace the 25-year-old North American Free Trade Agreement with a new version designed to encourage more investment in factories and jobs in the U.S.

But the so-called U.S.-Mexico-Canada Agreement, or USMCA, needs congressional approval. Democratic lawmakers have demanded changes designed to do more to protect workers and the environment and to make sure the deal's provisions can be enforced.

Pelosi's upbeat comments suggest progress in negotiations between congressional Democrats and Trump administration officials at the Office of the U.S. Trade Representative.

Moving ahead on the trade deal could signal that Democrats and Republicans can work on substantive issues even as the House pursues a divisive impeachment case against Trump.

Pelosi met with Democratic lawmakers Thursday to discuss the trade deal and other issues. An aide in the room said Pelosi reiterated that Democrats do not want something incremental. They want something transformative for American workers.

House Ways and Means Committee Chairman Richard Neal, D-Mass., told colleagues the biggest outstanding issue to be resolved is enforcement of enhanced labour standards in Mexico. Pelosi added that corporations funding television ads calling for a vote on the trade pact don't want the strengthened labour standards. The aide spoke on condition of anonymity because the aide was not authorized to discuss details of the meeting publicly.

Rep. Earl Blumenauer, who chairs a trade subcommittee, told Democrats there was progress on pharmaceutical issues and environmental protections, but said a working group has not seen commitments from the administration in writing, according to the aide.

The administration has yet to release a text of the legislation Congress will vote on, so business and labour groups don't have details on how Trump's team and Democrats are attempting to bridge their differences.