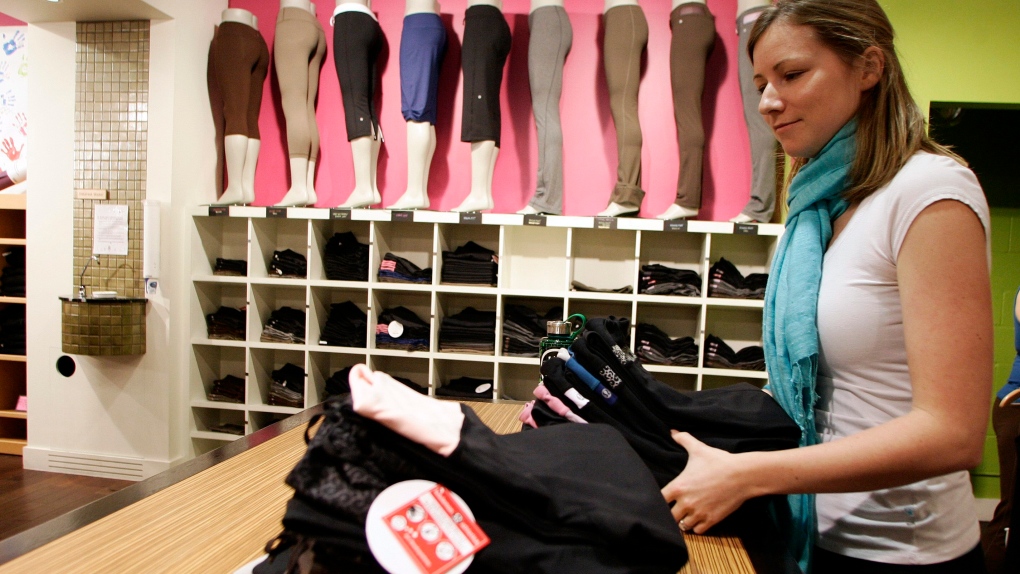 A clerk folds a stack of yoga pants at the Kitsilano Lululemon store in Vancouver in this file photo from Thursday, Oct. 18, 2007. (The Canadian Press/Richard Lam)

The athleisure retailer presented the idea at Protein Industries Canada's (PIC) pitch day Monday in a talk titled: Clothing the World with Crops, according to a photo of a PowerPoint slide.

Lululemon's pitch focused on using byproducts from pea processing as inputs for new clothing materials, said Bill Greuel, chief executive of PIC, a not-for-profit industry association that is one of the federal government's five supercluster initiatives. Its goal is to create business opportunities, collaborate and invest in projects that could transform Canada's agriculture and food processing industries, according to its website.

"It's not far-fetched at all," he said, pointing to other examples of more sustainable material used for clothing, like bamboo. Many companies, including Patagonia, also already use hemp.

Lululemon declined to comment on the presentation, with spokeswoman Erin Hankinson writing in an email that "we don't have anything else to share."

Peder Sande, who delivered the presentation in Calgary, is a consultant for the company.

More than a dozen companies, researchers or other groups gave presentations that lasted about five to seven minutes each during the day.

PIC had put a call out for talks on business challenges, interesting technology platforms, specific research capabilities and other topics, said Greuel.

"All with the idea that, you know, we want to create opportunities for collaborative research out of the discussion."

Lululemon's idea would be a "great opportunity" for the industry to utilize some of the byproducts from pea processing, said Greuel.

Consumers are demanding more plant-based protein in their diets. Canada's new food guide released earlier this year even recommends people "choose protein foods that come from plants more often" and restaurants have scrambled to add vegan options, like Beyond Meat burgers and breakfast patties, to their menus.

That need for plant-based protein is driving the industry today, said Greuel. The popular Beyond Meat burgers, which temporarily sold out after A&W first started selling them, for example, contain pea protein isolate.

When processors extract protein from peas, pea starch and fibre is left behind, he explained.

Those byproducts are currently used to make glass noodles, livestock feed and other products, Greuel said.

Any idea that adds value is a tremendous opportunity for Canadian farmers to diversify their markets and increase farm-gate prices, wrote Allison Ammeter, chairwoman of the plant protein alliance of Alberta, in a statement.

"Value-add can be food products, beauty products, industrial products, perhaps yoga pants? Why not?" wrote Ammeter, who attended the presentation.

The next step is for any interested companies, including Lululemon, to submit a project proposal to PIC, said Greuel, which is due at the end of the month. PIC will then determine within a few months which of those projects it will help fund.