Pace of rate hikes slower 'if the economy were to disappoint': Yellen 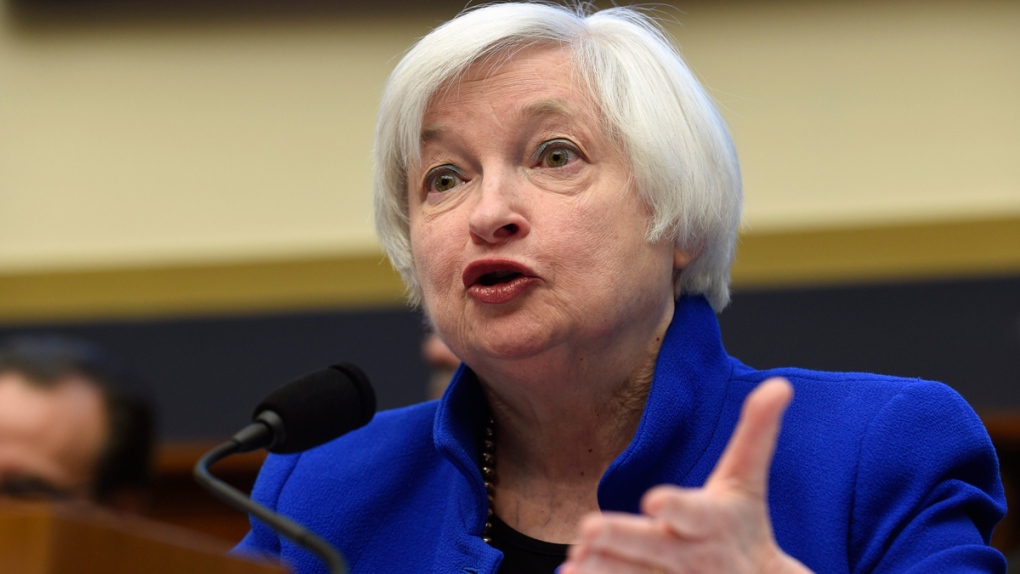 But Yellen made clear that the Fed won't likely find it necessary to cut rates after having raised them from record lows in December. She did concede, though, that negative rates, which central banks in Japan and Europe have recently imposed, are a tool the Fed has at least studied.

In her semiannual report to Congress, Yellen offered no major surprises. And she reiterated the Fed's confidence that the U.S. economy was on track for stronger growth and an increase in too-low inflation. At the same time, she acknowledged the weaker economic figures that have emerged since 2016 began and made clear the Fed is nervous about the risks from abroad.

Her concerns about the perils to U.S. growth contrasted with the Fed's statement eight weeks ago, when it raised interest rates for the first time in nearly a decade and described economic risks as "balanced."

In her testimony to the House Financial Services Committee, Yellen also:

-- Expressed sympathy with committee members who raised concerns about chronically higher-than-average unemployment among black Americans. Members of an activist group, the Fed Up coalition, attended the hearing wearing T-shirts emblazoned with the messages "What Recovery?" and "Let Our Wages Grow." The group has been urging the Fed to delay further rate hikes until the job market improves further, especially for minority groups.

-- Sounded her concern about China's weaker currency and economic outlook, which are rattling financial markets. She also warned that rising borrowing rates and a strong dollar could slow U.S. growth and hiring, a reflection of the intensified turmoil that has gripped markets this year. Still, she said strong hiring at the end of 2015 and signs of stronger pay growth could offset those drags.

-- Said the Fed still expects to raise rates gradually but is not on any preset course. The Fed will likely slow its pace of rate increases "if the economy were to disappoint," she said.

-- Cautioned that the sharp declines in stock prices, rising rates for riskier borrowers and further strength in the dollar had translated into financial conditions that pose risks to growth. "These developments, if they prove persistent, could weigh on the outlook for economic activity and the labour market, although declines in longer-term interest rates and oil prices could provide some offset," she said.

-- Observed that the central bank still thinks energy price declines and a stronger dollar will fade in coming months and help raise inflation back up to the Fed's 2 per cent target rate. The higher-valued dollar has held down U.S. inflation by making foreign goods cheaper for American consumers. Worker pay, though, has started to show its first significant gains since the Great Recession ended 6 1/2 years ago.

Yellen's testimony marked the first of two days of testimony she will give to Congress. Her appearance marked her first public comments since December, when the Fed raised rates for the first time in nearly a decade.

After the Fed began raising rates, economists widely expected it to continue to boost its benchmark rate gradually but steadily, most likely starting in March. But economists have scaled back their expectation for four modest hikes this year down to perhaps only two, with the first hike not occurring until June at the earliest

Yellen's testimony Wednesday included her most extensive comments on the situation in China. The data so far do not suggest that the world's second-largest economy is undergoing a sharp slowdown, Yellen said. But she added that declines in that country's currency have intensified concerns about China's economic prospects.

"This uncertainty led to increased volatility in global financial markets and, against the background of persistent weakness abroad, exacerbated concerns about the outlook for global growth," Yellen said.

U.S. growth, as measured by the gross domestic product, slowed sharply in the fourth quarter of 2015 to a meagre annual rate of 0.7 per cent. Yellen attributed the result to weakness in business stockpiling and export sales. But she noted that economy is being fueled by other sectors including home building and auto sales.

And she said the U.S. job market remains solid, even after slowing in January to a gain of roughly 150,000 jobs. That addition was still enough to lower the unemployment rate to 4.9 per cent from 5 per cent.

While many Democrats expressed support for a go-slow approach by the Fed in raising rates, Republicans on the committee argued that the subpar economic recovery over the past 6 1/2 years was evidence of the mismanagement of the economy by President Barack Obama.

"This recovery is the most dismal, tepid recovery we have ever had in recorded history," said Rep. Robert Pittinger, R-North Carolina.