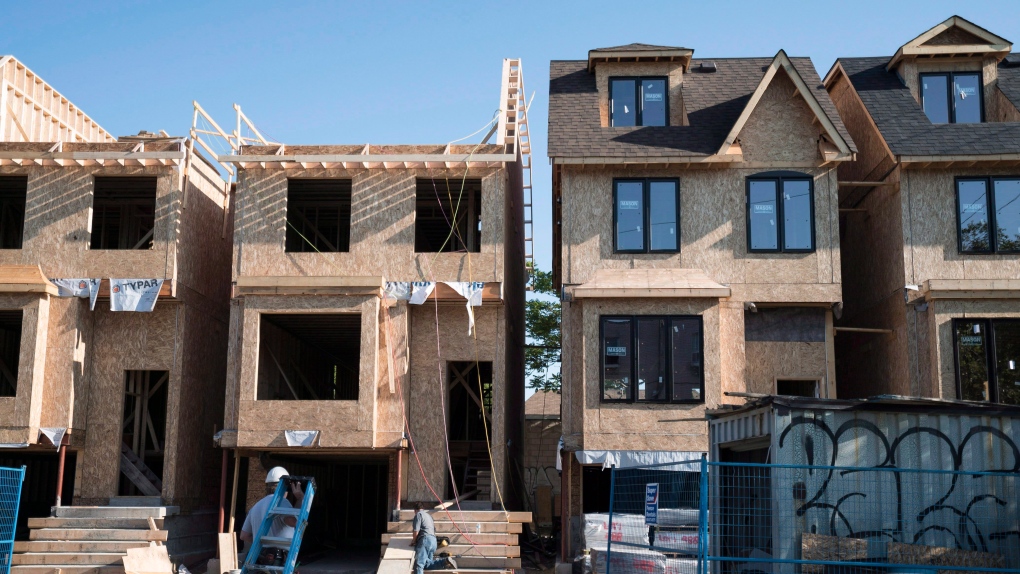 OTTAWA -- Canada Mortgage and Housing Corp. says the pace of housing starts picked up in November, pushing the six-month trend to the highest level in nearly a decade.

The Ottawa-based Crown corporation says construction of multiple-unit projects in Toronto has been a driving force behind the trend.

In November, the seasonally adjusted annualized rate of housing starts across Canada was 252,184 units -- up from 222,695 units in October.

Multiple-unit urban starts accounted for 175,016 units on a seasonally adjusted basis, up 16.9 per cent, while single-detached urban starts were up 7.5 per cent to 60,396 units and rural starts were estimated at 16,772.

CIBC World Markets chief economist Avery Shenfeld said in a note that the size of the increase was "stunning" but it "doesn't clash as much with other Canadian housing indicators as you might think."

"Home sales have slowed, but with builders focused on condos that are started well after most of the units have been bought, it's going to be a while before quieter sales offices mean fewer cranes on the horizon."

Ontario's seasonally adjusted rate rose to 95,741 units in November from 57,916 units of all types in October.

While recent real estate sales in the Greater Toronto Area have fallen year-over-year since the province introduced a collection of policies to cool the market, Dugan said evidence of overbuilding in Toronto is low "due to the decreasing inventory of completed and unabsorbed multiple units and strong demand."

BMO chief economist Doug Porter estimated that Ontario is on pace for 82,000 starts in 2017, which he said would be the best level since 2004.

There were also month-over-month increases in the Atlantic and Prairies regions but declines in Quebec and British Columbia, but Porter was also generally upbeat in his assessment of even the laggard provinces.

"Activity in British Columbia pulled back in November, but the province is still on pace for the strongest year since 1993," Porter wrote in a note to clients.

"Quebec dipped in November, but is still on pace for a solid (best since 2012) year alongside improved demand conditions."

As for Atlantic Canada, Porter said the region remains "stable and subdued" while Alberta saw activity pick up to 34,000 -- "well off the 2016 floor, but also well shy of peak constructing activity (near 50,000) before the oil shock in 2014."