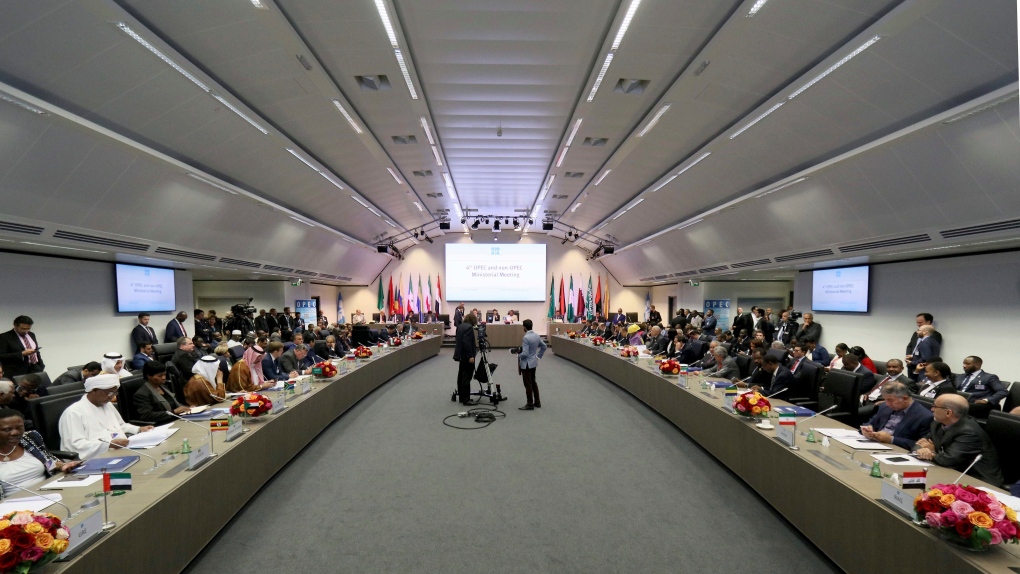 General view of a meeting of oil ministers of the Organization of the Petroleum Exporting Countries, OPEC, and non OPEC members at their headquarters in Vienna, Austria, Saturday, June 23, 2018. (AP Photo/Ronald Zak)

The OPEC oil-producing countries and ally Russia said Friday they have agreed to cut crude production, prompting a surge in global crude prices that they hope to sustain into next year.

The group decided to cut output by an extra 500,000 barrels a day as they try to support the price of energy and bolster their revenues. But the decision was not easy: they do not want to hand over too much business to the United States, which keeps pumping more oil and flooding the market.

"We have decided to reduce production by 500,000 barrels a day through the first quarter of next year," said Russian energy minister Alexander Novak.

The cuts come on top of a reduction of 1.2 million barrels a day that they have been observing for the past three years.

The sticking point in the talks, which dragged on over two days, appears to have been how to share the cuts among the 14 OPEC countries and nations like Russia that have been co-ordinating their production with the cartel in recent years.

Saudi Arabia has been bearing the burden of the largest share of production cuts recently. But some countries including Iraq and Russia have been pumping more than expected, dampening the overall impact on markets.

Analysts note that if countries are already not complying with the current agreement, agreeing in principle could be pointless.

The price of oil had risen in recent days on expectations for a production cut and gained further on Friday. Brent, the international benchmark, jumped 86 cents to $64.25 a barrel. The U.S. benchmark gained 77 cents to $59.20 a barrel.

It's unclear whether energy prices will continue to rise, however. Even as the members of the cartel cut production, there is more oil coming to market from non-OPEC nations, including the U.S., Canada, Brazil, Norway and Guyana. That could make up for any cuts from OPEC and Russia.