One in four credit-cardholders couldn't make payments in May and June, survey says 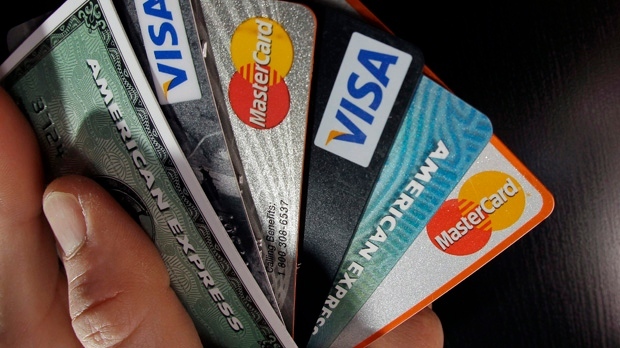 Credit cards can be seen in this undated image. (File)

TORONTO -- A new survey by J.D. Power indicates that this spring, nearly one in four customers of the major credit-card companies were unable to make monthly payments.

J.D. Power's May and June survey of more than 6,700 credit-cardholders suggests that consumers whose income was dented during the pandemic were generally less satisfied with their credit-card companies.

John Cabell, director of banking and payments intelligence at J.D. Power, said that Canadian credit-card companies are "falling behind in key areas related to the customer experience."

"In terms of what customers say is most important, the biggest is terms -- interest rate, credit limit and fees -- and making sure that those things align with customer expectations. And what we're seeing right now is that customers are more sensitive in that area," said Cabell in a phone interview from the U.S.

J.D. Power said that while overall credit-card satisfaction is flat compared with last year, what has changed is that people are less satisfied with the companies' online help and call centre service. The survey indicated that wait times at credit-card companies' call centres hit 12 minutes during the pandemic, compared with less than eight minutes prior to the pandemic.

The annual survey -- which weighs factors such as benefits, credit-card terms, customer interaction and rewards -- comes in the wake of COVID-19 accommodations that allowed some people to defer payments.

Since J.D. Power fielded its survey in May and June, other data have shown that households are now resuming monthly payments that were on hold this summer.

As of the end of July, the average deferral rate for personal loans and credit cards at the Big Six banks fell to 4.3 per cent, down from 9.6 per cent in April, according to RBC, which said that banks deferred payments on nearly 470,000 credit cards.

By August's end, Scotiabank said that credit cards were its smallest source of payment deferrals (compared with auto loans and mortgages), noting that after deferrals ended, 96.8 per cent of customers remained current with their payments.

"There still seems to be a fairly conservative approach to the use of credit cards ΓÇª That is likely to change over time, as more consumers are able to eventually begin using their card again for things like travel and dining out. But it's going to be a slow process," said Cabell.

"Locally, there may be some areas where restrictions are lifting or the economy seems to be brightening up a little bit. But there's still a lot of anxiety or stress that consumers have about their financial future right now."

Overall, respondents favoured Tangerine Bank, American Express and Canadian Tire cards the most, and Canadians were generally more loyal to their credit card issuers than U.S. cardholders. The polling industry's professional body, the Marketing Research and Intelligence Association, says online surveys cannot be assigned a margin of error because they do not randomly sample the population.

Cabell said that consumers are favouring straight-to-the-pocketbook perks, such as extending the duration of annual fees, over extras such as discount airline tickets. Separate data from Ratehub.ca from around the same period suggested that more consumers were shopping for cards that offered secured credit or cash back. Travel rewards cards are still popular -- though less so than in 2019 -- but retailer rewards were on the decline, Ratehub said.

Mikael Castaldo, Ratehub's manager of everyday banking, said that issuers such as American Express are bringing new cash back cards to the market, as consumers seem to gravitate toward cash, as opposed to low interest rates or balance transfers.

While it's early days, even if customer service is lacking, Castaldo cautioned that it may not move the needle in the current economy.

"It kind of breaks into two categories. On one hand, you have consumers that had a really bad experience and are looking to switch. But I think, overall, the majority are reluctant to switch financial institutions at this time," said Castaldo.

"They might be worried that they may not be approved for a credit card. The rate of switching might actually go down -- but that's really just speculation right now."