Once a retail shrine, flagship stores lose their shine 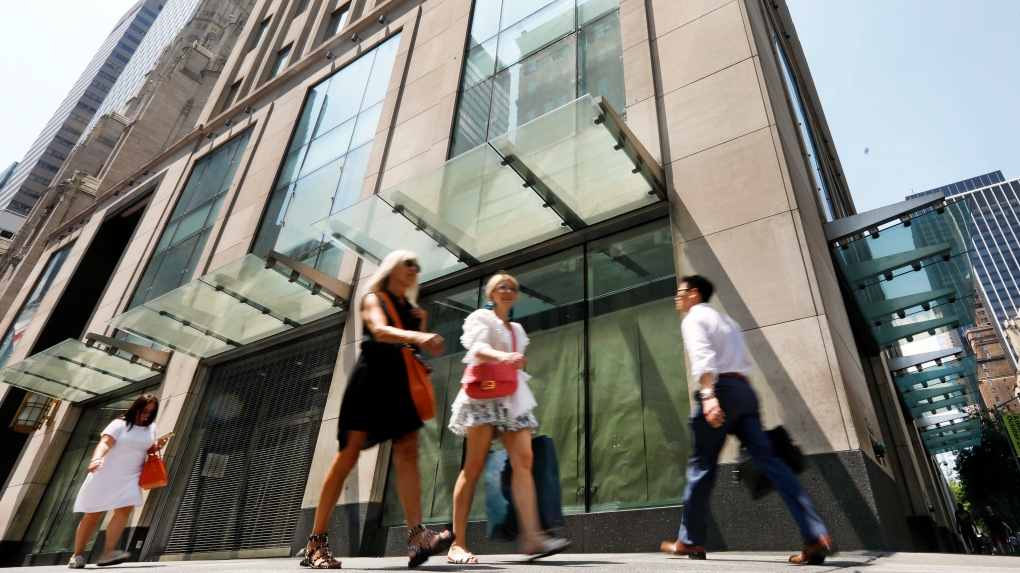 NEW YORK -- It used to be considered the retailer's crown jewel -- a large format store on a swank corridor that showed off the best of what a brand had to offer.

But now the so-called flagship store is disappearing from high-profile shopping thoroughfares like Manhattan's Madison Avenue and Chicago's Magnificent Mile because of skyrocketing rents and the shift to online shopping.

Other retailers are reimagining the flagship concept instead of abandoning it altogether. Nike, for instance, opened a massive store on Fifth Avenue late last year that doesn't have any cash registers. It lets shoppers see details of items displayed on a mannequin by scanning the QR code and then having those items delivered to a fitting room or a designated pickup spot. Levi Strauss & Co.'s new flagship in Manhattan's Time Square features larger dressing rooms with call buttons and tailors who can add trims and patches to customers' jeans.

Those still clinging to the old concept, however, are having a harder time. The latest victim could be Barneys New York, which opened its 10-story Madison Avenue store in 1993 and became a cultural icon in luxury shopping but now risks closure. High rents and a dramatic shift toward online shopping are pressuring it to evaluate restructuring options, including possible bankruptcy, according to a source close to the matter who asked to remain anonymous because the discussions are confidential.

Joseph Aquino, who runs his namesake real estate services firm, says the days of the shop-til-you drop mentality on Madison Avenue popularized by the HBO popular series of the 1990s "Sex in the City" are over.

"She was 45 and now she is 65... She isn't shopping like she was 45," Aquino said. "We are in the phase where a lot of younger shoppers don't want to go the high street. They sit around and buy online and that's what we are fighting against."

The concept of a flagship store is more than a century old and used to be limited to retailers' biggest store -- one in their first or most prominent location. But in the last 20 years, a flagship store frenzy took hold and retailers from Gap to H&M looked at them as a must-have shrine to their brands, opening multiple flagships in multiple locations. Not only that but they were willing to pay exorbitant sums of money to showcase their merchandise in luxury corridors.

Rents have swelled so much, however, that many retailers can no longer justify the high price, especially as more shoppers shift their spending online and physical stores lose foot traffic.

Last year, the net number of retail square footage lost in these corridors topped 353,000, surpassing the 214,000 loss of square feet seen in 2009. The loss was exaggerated by Macy's selling of its I. Magnin portion of its flagship store at Union Square in San Francisco. But CoStar found that excluding even that move, every high-end shopping corridor it tracked saw a weakening trend.

As a result, rents on Madison Avenue and Fifth Avenue have taken a hit as demand for these locations have fallen. Average annual asking rents for ground floor locations for the Fifth Avenue strip between 49th and 60th Street was $2,779 per square feet in the first quarter of 2019, down 11% from its peak of the first quarter of 2017, says commercial real estate broker Cushman & Wakefield.

But many analysts believe they haven't fallen far enough. In fact, commercial rents in 45 out of the 60 cities including New York, Los Angeles and Miami, are higher than in 2009 when the economy was in a recession, according to data from CBRE, a commercial real estate service firm. In the case of Barneys New York's Madison Avenue store, the landlord there reportedly raised its rent to $30 million from $16 million earlier this year. A Barneys spokeswoman declined to comment.

"I don't think you have a need for these massive stores," Stacey Widlitz, president of SW Retail Advisors, said. "Shoppers are shopping completely differently. You don't need a full assortment. They have to become an experience, letting customers get to know who you are versus selling stuff."

A growing number of retailers are also thinking smaller. Hollister, for instance, is embracing shrunken stores that offer online services and serve both local and tourist customers.

"Our customers continue to want smaller, more intimate stores where they can interact with associates and our smaller prototypes have proven higher productivity," said Abercrombie in an emailed statement.

Tommy Hilfiger, which also closed its other U.S. flagships on the swank Collins Avenue in Miami, will be testing smaller shops with online interaction in the U.S. that could be more like pop-ups.

Caroline Nash, 18 of Washington, D.C. says she finds massive stores too overwhelming, especially when she can get the merchandise online.

"I associate big stores with long fitting lines and big crowds," Nash said. "Unless it is something that offers a different experience, I'm not interested."