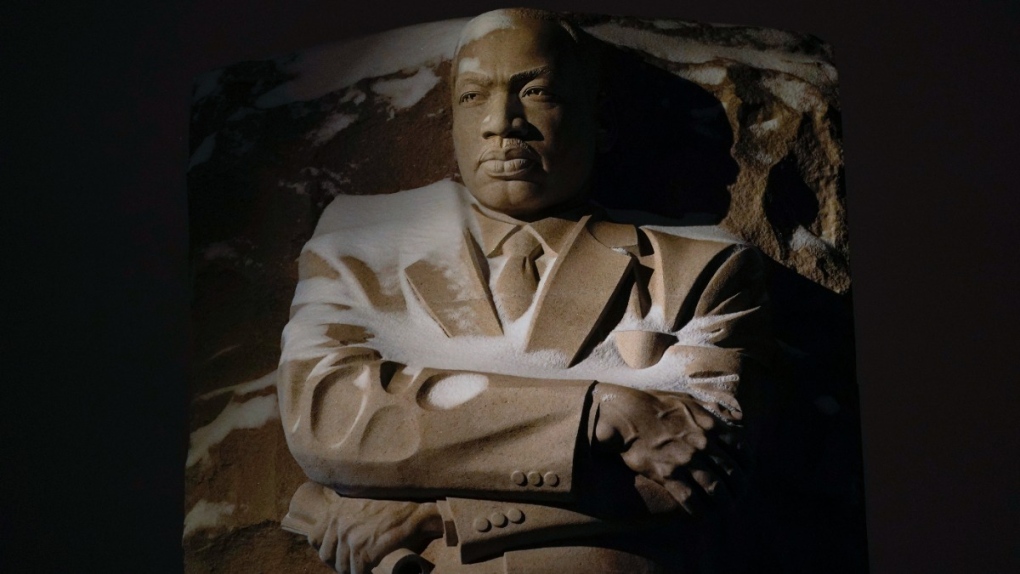 A day before the U.S. Senate was expected to take up critical legislation on voting rights that is looking likely to fail, Martin Luther King, Jr.'s eldest son condemned federal lawmakers over their inaction.

Speaking in Washington, D.C. on Monday, Martin Luther King III said though he was marking the federal holiday named for his father, he wasn't there to celebrate. He was there to call on Congress and President Joe Biden to pass the sweeping legislation that would help ease Republican-led voting restrictions passed in at least 19 states that make it more difficult to cast a ballot.

"Our democracy stands on the brink of serious trouble without these bills," he said.

Monday's holiday marked what would have been the 93rd birthday of the Rev. Martin Luther King, Jr., who was just 39 when he was assassinated in 1968 while helping sanitation workers strike for better pay and workplace safety in Memphis, Tennessee.

Around the U.S., other holiday events included marches in several cities, acts of service in King's name, and the annual Martin Luther King Jr. service at the slain civil rights leader's Ebenezer Baptist Church in Atlanta, where U.S. Sen. Raphael Warnock is the senior pastor.

Pews have been packed by politicians in past years, but given the pandemic, many offered pre-recorded speeches instead, including Biden and Vice President Kamala Harris, among many national leaders who used the day to acknowledge the unmet needs for racial equality.

Biden said Americans must commit to the King's unfinished work, delivering jobs and justice and protecting "the sacred right to vote, a right from which all other rights flow."

Democrats had hoped to vote on the legislation Monday, in a show of respect for the late civil rights leader as the issue gathered political steam late last year and peaked with a powerful blunt speech last week by Biden, who likened the Jan. 6, 2021, violence and election subversion of today with the civil rights struggles fought by King and others. But it comes too late for many civil rights leaders.

Senate Republicans remain unified in opposition to the Democrats' voting bills, and the 50-50 chamber needs 60 votes to pass the legislation. And two Democrats, Sen. Joe Manchin of West Virginia and Sen. Kyrsten Sinema of Arizona, remain opposed to changing Senate rules that would allow for the Democrats to pass the bills without the GOP. The vote was pushed back to Tuesday, and it looks as if it there is no way through for the legislation that civil rights groups view as necessary to protect the right to vote.

King told of how his father also faced a pushback on civil rights by those who believed the issue could not be solved with legislation. "They told him he had to change hearts first. And he worked hard at that. After all, he was a Baptist preacher. But he knew that when someone is denying you your fundamental rights, conversation and optimism won't get you very far."

Harris was meeting Monday with lawmakers ahead of the vote working to get the legislation passed. But when asked specifically about her message to Sinema and Manchin, she didn't engage directly.

Sen. Tim Scott of South Carolina, the Senate's only Black Republican, countered with a series of King Day-themed videos he said would emphasize positive developments on civil rights. Scott sidestepped criticism about GOP actions and accused Biden and Democrats of labeling his party members as racists.

"To compare or conflate people who oppose his positions as being racists and traitors to the country is not only insulting and infuriating, it's dead wrong," Scott told The Associated Press.

To the sparse crowd at Ebenezer, Warnock, now running for reelection as Georgia's first Black senator, said that "everybody loves Dr. King, they just don't always love what he represents."

Other leaders weighed in, too. Former President Barack Obama shared a picture of King's granddaughter Yolanda admiring a bust of King that Obama kept in the Oval Office. "The fight for voting rights takes perseverance," Obama tweeted. "As Dr. King said, `There are no broad highways to lead us easily and inevitably to quick solutions. We must keep going.' May we honor his memory through action forged in faith."

King "saw a great injustice in his world and fought to right that wrong," Republican Georgia Gov. Brian Kemp said in a recorded message played at Ebenezer. "His methods ultimately led to success and showed all of us that taking the high road is the best path to achieving lasting change."

Democrat Stacey Abrams, now trying again to defeat Kemp as he seeks reelection, tweeted that King's call remains clear: "Deliver justice for the poor, protect those targeted by hate, defend the freedom to vote, and demand that our leaders fight current malice as the best bulwark against future harm."

King, who delivered his historic "I Have a Dream" speech while leading the 1963 March on Washington and was awarded the Nobel Peace Prize in 1964, considered racial equality inseparable from alleviating poverty and stopping war. His insistence on nonviolent protest continues to influence activists pushing for civil rights and social change.