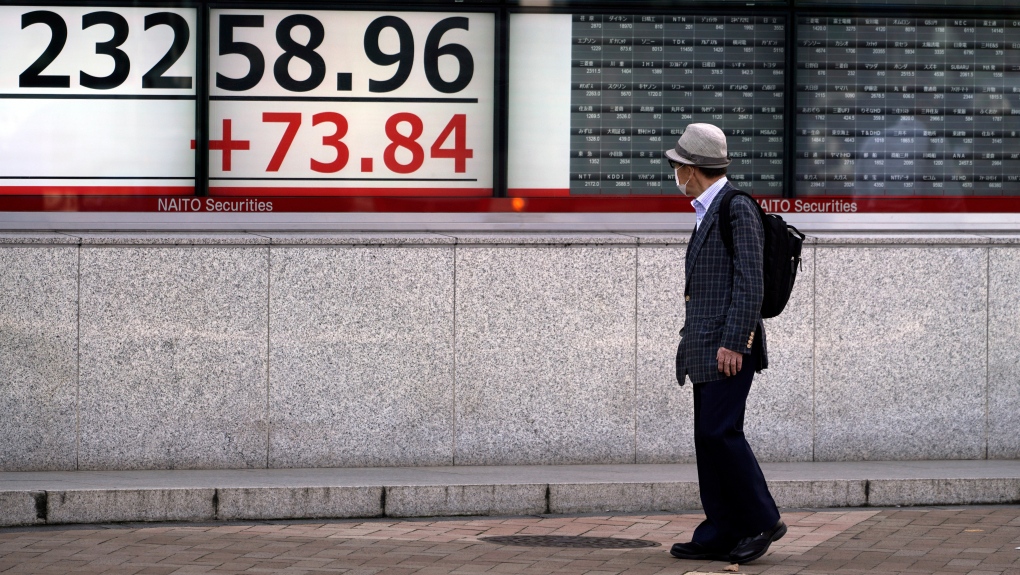 A man looks at an electronic stock board showing Japan's Nikkei 225 index at a securities firm Friday, Oct. 2, 2020, in Tokyo. (AP Photo/Eugene Hoshiko)

“And that's the way it should be, back to a stock-picker's market when the actual fundamentals are dictating the share prices.”

Colliers International Group Inc. was rewarded with a 12-per-cent gain after raising its guidance and posting a massive beat of expectations.

Meanwhile, Restaurant Brands International Inc. pushed the consumer discretionary sector lower as its shares dropped 3.8 per cent after results detailing the negative impact of COVID-19 on store openings and sales.

Overall, corporate earnings in the third quarter are beating expectations - which have been broadly lower because of the pandemic and its economic impact.

Earnings growth among Canadian companies in the quarter is so far outperforming U.S. firms, said Jerusalim.

Whereas growth is down about 14 per cent in the U.S., the cyclical makeup of the TSX and contribution from commodities, led by gold, have pushed growth up 16 per cent year over year.

Rising COVID-19 cases continue to weigh on market sentiment especially in the United States, which reported record numbers of infections in the past week and growing hospitalizations.

Meanwhile, Nasdaq and the technology sector on the TSX were “reinvigorated” on signs of a merger and acquisitions “supercycle,” said Jerusalim.

It started Sunday with Cenovus Energy Inc. making a $3.8-billion friendly takeover bid for Husky Energy Inc. that pushed up Cenovus 6.7 per cent and Husky 7.3 per cent on Tuesday.

Then Brookfield Business Partners LP signed a deal to buy the remaining interest in Genworth MI Canada Inc. that it does not already own in an offer that values the company at about $3.8 billion.

On Tuesday, Advanced Micro Devices said it is buying Xilinx for US$35 billion in an all-stock deal that will combine the two Silicon Valley chipmakers and accelerate an already rapid-fire pace of mergers and buyouts in the industry.

“The setup with ultra-low interest rates and being late in the cycle, seeing lots of market disruptions from COVID and the market overall having clear leaders and laggards, I'll just say that the market is primed for more of these deals to continue,” said Jerusalim.

The Canadian dollar traded for 75.96 cents US compared with 75.75 cents US on Monday.

Eight of the 11 major sectors on the TSX were lower, led by the heavyweight financials as shares of Manulife Financial Corp. and several Canadian banks dropped.